"Twilight" actor Booboo Stewart is lending his star power to a new ad campaign from PETA that urges people to adopt from animal shelters rather than buy from pet stores.

In a behind the scenes video released in conjunction with the new ad, Stewart poses with his rescue poodle Pookie and urges people to avoid pet stores.

"If you guys are interested in getting any kind of animal, definitely go and adopt," says the 17-year-old actor. "Pet stores just sell their animals."

The "Adopt, Don't Buy" campaign is intended to raise awareness of the more than 7 million dogs and cats that enter animal shelters each year in the U.S. According to PETA, each dog or cat purchased from a pet store "takes away a home from an adoptable animal -- meaning that one more animal in a shelter will die."

By fueling demand for pet stores and breeders, PETA argues that the purchase of pets leads to inhumane conditions for animals, such as those seen in so-called "puppy mills."

"Puppy mills are a well-kept secret of the pet-trade industry," PETA writes on their website. "They supply animals to pet stores and purebred enthusiasts without any concern for the millions of animals who will die in animal shelters as a result. It's standard practice for puppy mills to keep animals in cramped, crude, and filthy conditions without proper veterinary care or socialization."

While this isn't the first time a celebrity has spoken up for the animal rights group, it is a more conservative PETA ad compared to Elisabetta Canalis stripping down for the 'I'd Rather Go Naked Than Wear Fur' campaign.

Check out the new ad and video of Stewart below. 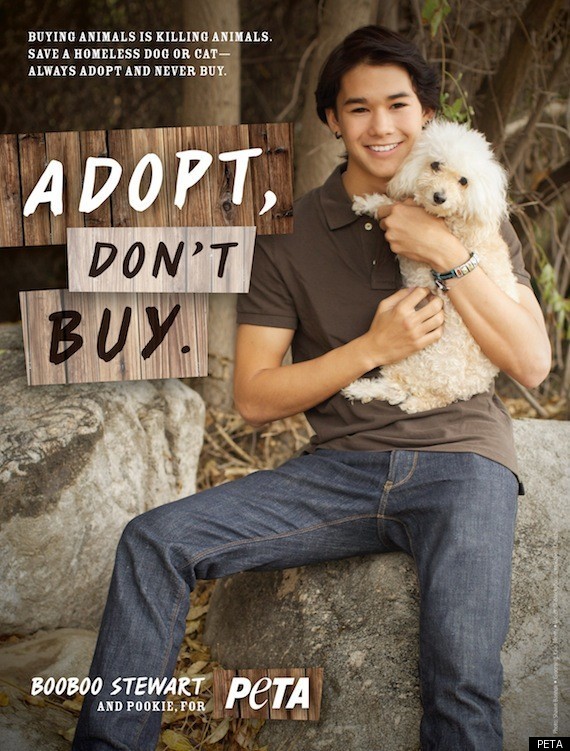