Like all normal women in America, we've used our bras as an ersatz purse. (Pro tip: a sports bra strap doubles as an excellent iPod holder while jogging.)

But Christina Conrad, a New York based editor and writer, wants to take the bra purse idea to a whole new level with her new product, the Boobypack bra.

Is it a bra? Is it a top? It's both, apparently: the sports bra-like contraption features zippered pockets on the sides where you can tuck your phone, credit cards, money and the like (gum! receipts! broken pen caps!). It's also waterproof, so you don't have to fret about sweating your way to a broken iPhone.

Conrad hatched the idea and took it to a designer in New York City's garment district, and says she's primarily marketing the Boobypack to EDM (Electronic Dance Music) concert goers who want to rave freely without shedding credit cards all over the dance floor. (Indeed, the neon colors the bra already comes in would suit a Skrillex show quite nicely.)

The Boobypack has already been a smash hit; its Kickstarter page shows it's already met its original funding goal of $15,000. If the total climbs to $60,000, Conrad writes that she'll be able to make $4,000 bras and start on her next idea, a Boobypack that also charges your iPhone while it's stashed away. (Is this heaven??)

Its cheeky name aside, the Boobypack just might be a real hands-on solution to the stash-your-stuff dilemma. Although, we're skeptical about how it'd do on women larger than, say, a B-cup.

Would you use it? See how the Boobypack works in the video above. 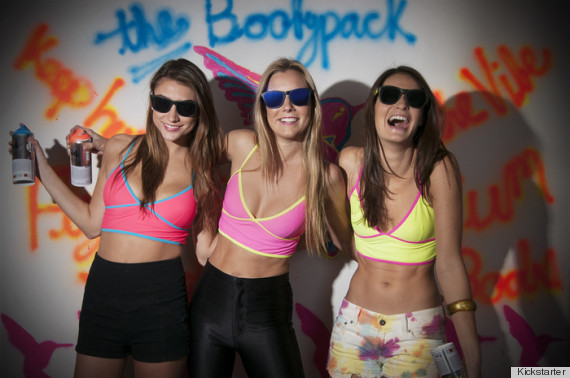 THESE products weren't such good ideas...