In writing Give Sorrow Words I wanted to invite readers to join me on my journey. My intention was to let our story unfold naturally, not be weighed down by statistics and research. However, it was also important that readers understand that there is never one reason in suicide.

The Post Mortem chapter is included in the Afterword section of Give Sorrow Words and specifically relates to current mental health research in depression and suicide.

Oakville, June 20, 2012
Everyone who knew Daniel was as shocked by his suicide as we were. None of us knew the other Daniel; particularly in the last months of his life. Changes in his brain functioning, chronic health conditions and alcohol contributed to our son's bouts of mania and depression. In his last hours Daniel would not have recognized himself.

Two days after what would have been Daniel's 26th birthday, I came across a vital piece of information that had eluded me. In the Globe and Mail newspaper, I stumbled onto an article about the 'fragility of the teenage brain'. The Globe described a study, led by researchers at the University of Montreal, that claimed a blow or bruising to the frontal lobes could cause severe damage, even trauma if it affected the cognitive part of the brain responsible for decision-making and organization responses. This vital part of the brain (known as the "subcortical." region) controls moods and behaviour.

Since my son's death I had read the literature on mental illnesses, depression and disorders of the brain. I had also reached out to clinical professionals whose day-to-day work involves diagnosing and treating diseases of the brain. Including Dr. Roger McIntyre, Professor of Psychiatry and Pharmacology at the University of Toronto and Head of the Mood Disorders Psychopharmacology Unit, University Health Network in Toronto. Dr. McIntyre's research into inflammation and its connection to mood disorders are in part responsible for reshaping the model of treatment for sufferers of depression. Dr. McIntyre:

It is not uncommon because of the effect of depression on the brain that it can take the sufferers ability to have insight and hovering capacity as to what they are going through. In other words it is the case that depression hijacks people and locks them into a reality misperception and distortion that is immutable in many case. It is not volitional what they are doing. Most suicide is impulsive and many who survive attempt really didn't want to do it to completion.

I had become a lay expert on depression, but I still felt as if I was missing an essential piece of information that would connect events to the changes in Daniel's behaviour. But after reading the Globe article, the research and studies made more sense. Daniel was an avid boarder; snowboard, long board and wakeboard. As an adolescent I know he fell hard, hitting his head at high speed. Particularly, when he wake-boarded; possibly jarring his brain or worse, sustaining brain damage (or concussions). In the developing brain, a severe blow to the head can lead to deficits in the brain's working memory. The blow can affect a person's ability to 'hold and manipulate information for short periods of time.' It can also lead to impaired concentration and be the cause of severe headaches, both of which Daniel suffered.

Daniel routinely snowboarded into half pipes to get some backside air or perform an alley-oop; rotating 180 degrees towards the up side of the half-pipe. He lived for the high of floating above the ground. But there were times when he fell hard or slammed into the wall of the half pipe. He adopted the same risk-taking behaviour while riding his wakeboard. Daniel would instruct me to drive the boat at 22 mph while he waited for the precise moment when there was enough tension on the towrope to give him the best pop (or air) to complete his trick. Then he would attempt a big spin and land hard on the water and sometimes his head would take the force of the fall. As the driver of the boat I saw some of those falls; as I turned the boat around to pick him up he would wave his arm in the air, signaling he was fine. Let's do it again.

We encouraged athletic participation in our family, when what we needed to be was more aware of the risks, the symptoms and long term side effects associated with the extreme sports that Daniel participated in.

I had also read about epigenetics, which refers to a 'heritable but mutable set of processes that regulate the expression of particular genes in certain cell types and/or at specific developmental time points'. Recent studies by Poulter et al. reported 'alterations in epigenetic markers in suicide victims suggesting a link between mechanisms that regulate gene expression and Major Depressive Disorder (MDD)'.

Further research has shown that epigenetic modifications 'can occur in response to drug abuse, stress, learning, and early life experience'.

I knew that my son's asthma and anaphylaxis created a burden of anxiety that affected him all his life. One study in particular: Chronic Physical Conditions and Their Association With First Onset of Suicidal Behavior in the World Mental Health Surveys, confirmed what I had felt in regards to Daniel's ongoing health challenges:

And then the conclusion: 'The presence of physical conditions is a risk factor for suicidal behavior even in the absence of mental disorder'. Kate M. Scott et al.

Daniel did not wake up one morning and figure he'd had enough. Life over. No, there were critical factors and important events that all played into his last day. Awful isn't it? To realize you didn't really know what you were doing while you were raising your kids?

At least now I can point to the beginning of our son's malaise with some understanding. Daniel's fearless nature drove him to get involved in BMX biking and then into extreme boarding sports as a teenager. I know that he suffered repeated blows to his head, and if he had ever had a concussion it would have gone undiagnosed. In high school he began having sinus and migraine headaches. During this time there would have been imperceptible decreases in his brain activity, eventually leading to his inability to concentrate and to follow instruction.

We don't have absolute proof that brain injury was a factor in Daniel's death; however, what we do have is a growing body of evidence in regards to suicide, specifically in young males that can be attributed to an undiagnosed brain injury. And if that was the case, I understand why Daniel was unable to concentrate in his first year of university. He began falling behind and feeling guilty for not going to school and then he concealed his troubles. He began drinking to alleviate his growing malaise. My son's narrative had changed between high school and his first year at university and not for the good.

What I have come to acknowledge is that Bruce and I were both responsible for our son's well being. So it would follow that we had responsibility in his untimely death, but we couldn't help what we were unable to comprehend. Daniel had adapted all his life to health challenges. His melancholy was another problem that he would work through on his own.

So much of the literature on depression talks about a point in a person's life when 'the switch' that controls depression is flipped on. The circuitry of the brain changes as a result of experiences, genetics, lifestyle and god dam bad luck. The switch that had been flipped set in motion the way he interpreted his experiences. Add to that his childhood chronic health conditions virtually setting him up to view himself through a negative lens. Daniel's physical health conditions were a risk factor for suicidal behaviour. Looking back, we knew nothing of synapses and brain circuitry and the catastrophic fallout from long-term depression.

Daniel was a daydreamer. Sensitive and inquisitive by nature he was forever trying to interpret the world around him. As a young man he identified with those who were marginalized; people who were considered the underdogs. He was attracted to lyrics and literature that evoked powerful emotions; love and loss, suffering and hope. Conceivably, Daniel was drawn to painful narratives as a way to figure out what was taking over his own life.

This excerpt published with permission from the author.

Give Sorrow Words on Amazon

Watch "A Letter to Daniel."http://www.youtube.com/watch?v=ZEZ7poWkZ8Y 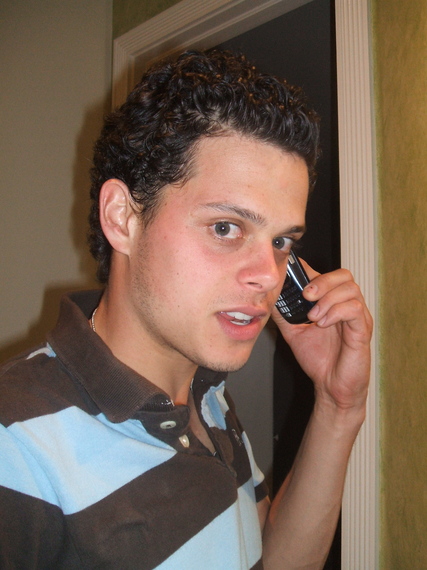