When I was 10 or 11 I went through a "reading explosion" -- an experience many lifelong readers seem to have, when they suddenly develop an overwhelming lust for reading and rip through book after book in a kind of fever. In my case it was Tom Swift Jr. books, Tarzan books, Robert E. Howard's Conan, Alistair Maclean, Ray Bradbury, Asimov, Arthur C. Clarke -- but also novelizations of forgettable 60s TV series like Captain Nice and Mr. Terrific. Why did I read those? Because I found them in my brother's room. They were books -- that was enough.

Since then I've become a lot choosier. But I've always had a book with me -- on trains, on planes, in waiting rooms, on vacations, eating solo in restaurants, getting into bed at night, not getting out of bed all day, sitting on the can. They've been my companions -- my friends. Their writers became my friends, too. After spending hours -- days -- inside their heads, I felt I knew them pretty well.

A second big contributor to my inner life has been drawing. I drew to entertain myself when I was a kid -- using DC and Marvel comics as models, but also Saul Steinberg (who made it look so easy) and then, once I discovered Zap comics, Robert "America's Greatest Living Artist" Crumb, who not only drew better than anyone but was funny and pornographic. And though at some point I stopped drawing -- probably because I couldn't draw like Crumb -- I never stopped looking at drawing. It's hard to explain the curious gratification I get from all those marks on paper. They're just marks -- sometimes a few lines, sometimes a crazy whirlwind of lines and scratches -- yet they manage to raise before your eyes people, places, things, ideas and emotions in ways that are unexpected but also feel right.

A couple years ago I started trying to draw again. I was inspired by the "art comics" I'd been reading -- work by Jim Woodring, Brian Chippendale, Chris Ware, Winschluss, Hans Rickheit, Dash Shaw and many more -- and by watching Ellie, one of my daughters, turn into an astonishingly good painter.

The first writers I drew were Evelyn Waugh and Flaubert, two of my very favorites. (I've since learned -- thank you, the-hungry-eye.tumblr.com -- that what I thought was a photo of "young Evelyn Waugh" is actually the filmmaker Humphrey Jennings taken by Lee Miller around 1940. That's what I get for not triple-checking everything I find on the internet!) I'm not sure exactly when it turned into a "project" -- a whole sketchbook filled with writers and books that have been important to me for different reasons at different times in my life -- but I've ended up with what I think is a pretty accurate record of my life as a reader, or at least a record of the highlights, the stuff that has stayed with me.

I begin working on a page by finding photo references in books or online. Some of the writers are closely associated in my mind with a specific copy of a book I've had for decades and read more than once -- like my worn out paperback copy of J.D. Salinger's Nine Stories or Thomas Pynchon's V. -- so I draw that. I don't plan the pages too much. As I draw, thoughts and recollections about the writers bubble up, and I fit what comes to me around the drawings. That may be a little story about my personal relationship with the writer or book -- how I discovered them or why they matter to me. It may include something striking the writer has said, or that I read about the writer in some other book. Sometimes I just want to sound off on why I think the writer should matter to everyone. Sometimes it's all of the above.

The sketchbook has been a very satisfying way for me to revisit these books and writers. I really do love them -- I feel like they've had a tremendous influence on who I am and how I think. I'm grateful for all they've given me, and I'm grateful that for some unknown reason I became a reader long ago. I recently completed the last page in the sketchbook -- but since the immense pleasure of reading goes on, and I continue to discover new writers and books to love, I guess it's time to start volume two.

Here are 12 drawings from my sketchbook: 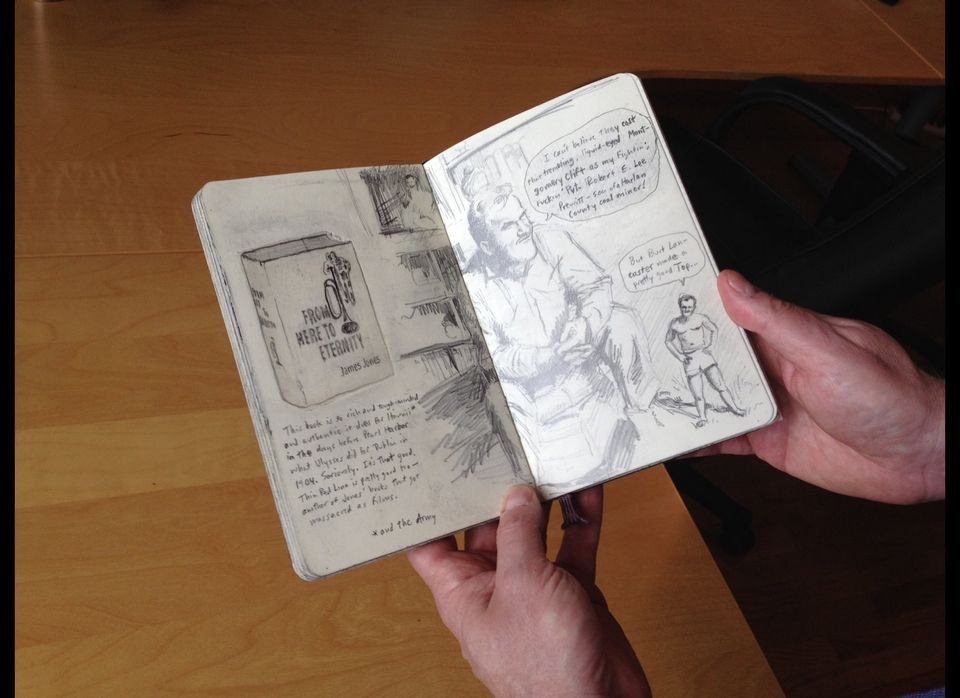