A Review of Mayhem by Elizabeth Harris 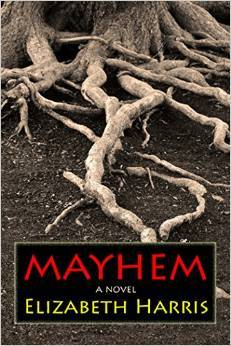 "A young woman climbing out of an old Essex in a cloche hat and a flowered maroon rummage-sale dress in front of the Prince Carl County courthouse, that's what some observers will remember . . . part of her fascination, escorted and left waiting in the lemony light of the October morning, is that she seems almost in custody . . . she is the trial's most intriguing spectacle, the origin of the crime, the modest, obedient, well-regarded woman taken in adultery."

Thus begins Elizabeth Harris's elegantly written novel Mayhem about a frankly fictional female, Evelyn Kunkle Gant, whose imagined life story suggests how women, in particular, can be reduced to oft-repeated caricatures such as "the adulterous wife," a woman on whose account a crime was committed, a crime that "made men cross their legs." This is the kind of story that often attached itself to "a category of able-bodied white women who 'lived in' and took care of invalid old people. . . Stories of wrong clung to these women . . . ." And the author, who makes herself a character in the novel at times, has grown up with them in a small rural town in Texas. Always curious in her youth about their lives, Harris feels she is "just a college degree and a few decades of change" from having been one of them.

And so Harris tells her own story about this woman named Evelyn, giving her a fuller life than the stereotype of the "woman taken in adultery" can possibly do. Harris speaks for Evelyn, on her behalf, telling her "secret" for her, and she gives her character "a feeling for everything she has lost to this local immortality." Harris speculates that Evelyn may dwell upon her losses "to remain a person in her own world, understanding that she has already become a character in a local story."

Harris's emphasis upon the fictional nature of Evelyn's tale might seem distancing at first, but its deeper effect is to suggest a deliberate expression of empathy on the part of the author, who makes careful choices about how to shape the story of her character. It is an empathy that powerfully draws the reader into Evelyn's experiences and into the life of the small rural Texas community in which she lives. It pays homage to Evelyn, expresses solidarity with marginalized white women from small rural towns, performs a sophisticated act of sisterhood.

The novel is also deeply about community and place. Set in rural Texas from 1909, when Evelyn is born, to the middle of the 1950s, it makes vivid the way in which country neighbors, and especially men, need each other to survive and prosper -- they mend fences together, butcher cattle, and maintain communal fishing docks. Rural people, and especially women, need family, as well, for a sense of belonging. And it is the power of these needs that accounts for the way in which families and communities so easily impose traditional habits of mind and action on those who live within them.

Violence, for example, which Harris's roots historically in the settler's early wars with Native Americans, is so deeply ingrained a tradition in this rural southern world that it seems like nature itself. Hence the title of the novel, Mayhem, alludes not only to castration, the focus of the book's central dramatic action, "a willful and permanent deprivation of a bodily member resulting in the impairment of a person's fighting ability," but also to the "needless or willful damage or violence" that is a part of everyday life for men and women both.

It is mainly white men who damage, and damage each other, largely to prove they are men according to the community's code. White men must be richer, more skilled in enacting status than other males. They must take revenge for perceived insults or threats, and, above all, they must control their women.

It is not a good life for white men, who direct male coalitional violence against each other -- a group of men, turned vigilantes, lynch a white man, one of their own, who is suspected of stealing. Men who are victimized can become subjects of local stories too. Such is the fate of the young man hanged from on an old oak tree, the menacing roots of which seem to appear on the novel's cover. There are traces of racial violence here as well, largely alluded to in memories of people once enslaved, but the book is on another trail.

It is white men's need to prove their manhood, often through violence against each other, that makes control of women so essential, since controlling females is a form of asserting masculine superiority. And control of women, especially wives, is the one thing white men can agree on in this novel. This need for control shapes the whole course of female experience in rural Texas. Evelyn expects nothing more of life than to get married and become a good, obedient wife, taking small pleasures where she finds them--in the smell of clean sheets and clothing and in organizing her time and her household chores. She also quietly endures martial sex, such as it is: ". . . it was over so quickly." And she reflects on how "a woman's fate and that of her children was determined by the man she married."

When Les Gant, Evelyn's husband, refuses to believe that a ne'er-do-well neighbor, Charlie, is making sexual advances to his wife, as she has claimed, when he angrily insists that Evelyn maintain his fishing lines at the pond where Charlie hangs out, he engages in an act of male bonding that is specifically aimed at discrediting Evelyn's assertions -- and the assertions of wives in general.

And so, the inevitable happens. Charlie approaches Evelyn and whines to let him "put it in you." He has a knife, so Evelyn agrees, and though Charlie fails to complete the act, Les, seeing them through the screen of the communal fishing cabin, assumes otherwise. He takes off after Charlie, ultimately slicing off one of Charlie's testicles with Charlie's own knife.

The greater violence, however, is enacted against Evelyn -- for being the "cause" of this crime. She becomes a pariah, a woman reduced to a false story, a woman who loses her place and her identity in life, except that Harris refuses to end her character's tale there. Instead, Harris gives Evelyn a hunger to live and the strength to make a new beginning. Evelyn's gradual and limited healing, in the life Harris has created for her, implies the possibility of partial recovery from the violence of the past and, more than that, suggests the bigger story of female compassion for, and interventions on behalf of, other women.

An arresting story about an ordinary woman, about the inner life of small communities, and about the dynamics of rural southern culture -- so important now in the political sphere -- the quietly insightful and beautifully written Mayhem intrigues and enlightens.

Betty White
AP
Doesn't it seem like Betty White has been around since David torpedoed Goliath with a slingshot? Our favorite golden girl is only 94 though. Even though Miss Betty White began her career in the 1940s on radio, and later appeared on late night talk shows and game shows (including "Password") in the 50s and 60s, she wasn't really a household name until, at the age of 51, she began playing "The Happy Homemaker" Sue Ann Nivens on "The Mary Tyler Moore Show" (1973-1977).
Morgan Freeman
Getty
Who doesn't love Morgan Freeman? This Academy Award winner paid his dues and then some. Freeman worked for several years as an actor, but really came into his own playing chauffeur Hoke Colburn in "Driving Miss Daily" at the age of 52 (although he was 50 when he was nominated for Best Supporting Actor in the film "Street Smart").
Sharon Osbourne
Getty
Heavy metal vocalist Ozzy Osbourne has been famous for over 40 years as lead singer of the English band Black Sabbath. His wife, Sharon, however, did not become a household name until their family reality show "The Osbournes" premiered on MTV in 2002. Just barely 50, Sharon became a media darling, which opened up many doors. She went on to become a judge on "America's Got Talent" and has been co-host of the CBS daytime show "The Talk" since it debuted in October 2010.
Regis Philbin
Getty
Regis Philbin was comedian Joey Bishop's sidekick on the ABC television show "The Joey Bishop Show" from 1967 to 1969 and hosted his own local talk show -- "A.M. Los Angeles" -- from 1975 to 1983. But his name wasn't exactly on the tip of our collective tongues until he became a daytime staple with Kathie Lee Gifford in 1988 on "Live with Regis and Kathie Lee" when he was 57. His vibrant, caustic, yet fun-loving personality pushed him over the top sometime after the show began to gain in popularity with daytime viewers.
Abe Vigoda
Getty
Born in 1921, Abe Vigoda captured the role of Salvatore Tessio in the film "The Godfather" in 1972 at the age of 51. His next big role came in 1975 when he signed on to play Sgt. Phil Fish on the television series "Barney Miller." And that's when Vigoda -- who passed away in 2016 -- really became a household name.
Tom Bergeron
Getty
Sure, Tom Bergeron became the host of "Hollywood Squares" in 1998 and of "America's Funniest Home Videos" in 2001, but he didn't really become widely known until joining the wildly popular "Dancing With the Stars." The amiable host was 50 when the show premiered in 2005. After more than 20 seasons as host, it appears he's a keeper.
Mike Wallace
Getty
Maybe Mike Wallace was well-known in some hard-core news circles, and perhaps he was on a first-name basis with a few news junkies many moons ago, but it wasn't until he laid his groundwork as a superb gotcha reporter on "60 Minutes" which he did from 1968 (after he turned 50) until 2008 -- that his star really began to shine. This well-respected news journalist sadly passed away on April 7, 2012 at the age of 93.
Samuel L. Jackson
Gabe Ginsberg via Getty Images
Born in 1948, Samuel L. Jackson appeared in more than 100 films before the age of 40. However, it was only after he landed the role of a hitman in "Pulp Fiction" in 1994 that his star really began to shine. For this performance, Jackson received a Best Supporting Actor nomination.
Andy Rooney
Getty
Andy Rooney is another personality that seems to have been around since the beginning of time, and we're all glad to have been the recipients of his off-the-wall satirical takes on human nature. In 1978, at the age of 59, Rooney began his "A Few Minutes with Andy Rooney" segment on the CBS news show "60 Minutes," continuing through 2011. He made us laugh, he made us cry, he made us think. It doesn't get better than that. Rooney died on November 4, 2011 at the age of 92 only a few weeks after his last appearance on the show.
Joy Behar
Getty
Joy Behar was 54 when she was cast as one of the original members of "The View," which made its debut in August 1997. A few years before that, you could catch Behar doing hilarious stand-up comedy on television. But she only became a household name sometime after "The View" became a must-see, daytime television talk show.