There are lots of ways to mark the passage of time, but none as unusual as seeing what common household objects find their way up a person's innards.

That's the discovery that forensic psychiatrist Marty A. Sindhian, M.D., made while researching "Stuck Up!" -- a look at the strange objects that have found their way into the human body through the various orifices. The intentionally funny book includes more than 100 bizarre X-rays, and when you finish, you may never look at Barbie dolls or baby shoes the same way again.

Sindhian, who co-authored the book with fellow shrink Rich E. Dreben and emergency room physician Murdoc Knight, made this discovery while researching a case about a person who came into the emergency room a few years ago and a cassette tape showed up on the X-ray.

PHOTO GALLERY
Stuck Up! The Strangest Objects Ever Inserted Into The Human Body

"Cassette tapes are probably not common at all these days," Sindhian laughed to HuffPost Weird News. "I don't expect to see any more of those in X-rays. But someone did get an iPod stuck inside them, so I think that shows that the choice of objects that are inserted reflects the larger culture."

Sindhian, who like Knight and Dreben, is using a pseudonym in the book, says the book was written for both humor and educational purposes.

"We hope it takes away the stigma of people seeking emergency treatment," he said. "Plus, this is the stuff that really interests laypeople."

That said, he and Dreben admit that emergency room insertions are a common discussion topic among medical professionals.

"Physicians do run into unusual cases, and among themselves or in academic settings, they might discuss these cases with colleagues for two main reasons: to get proper consultation and for teaching purposes," Dreben said.

The authors found more than 100 examples of strange objects that somehow found their way inside the body -- and the reasons are as different as the entry ways of choice.

"Younger people are more likely to swallow objects, or stick them in their nose or ears," Sindhian said. "They will put everything in their mouth."

"A lot of time they're swallowed because people want to hide them," Sindhian said. "Luckily, they pass through fairly easily."

Sindhian also said it's not uncommon for prisoners to attempt to swallow bizarre objects.

"They will do this so they can go to the hospital," he said. "People in mental institutions have also been known to do this as well. The strangest case I ever heard of was a mental patient who rolled up the lid of a can of tuna fish like a cigar and swallowed that."

But when you're an adult, strange objects are more likely to find their way into the body via the rectum.

Usually, the reason for this is because someone was toying around with the object. Dreben said this explains two of the more extreme cases in the book: the Barbie doll and the Buzz Lightyear action figure that made it the long, dark trip upstream.

"In these cases with toys, the patients were often seeking sexual pleasure or gratification," Dreben said. "Some patients have been known not only to stimulate themselves manually with toys, but they have also repeatedly swallowed parts of toys because, per their report, passing the toy parts through their gastrointestinal tract and ultimately the anus 'felt good.'"

Sindhian said men are more likely than women to get objects stuck inside them, either orally or rectally.

"Men, in general, tend to be more daring and engage in risky behavior," he said.

Even stranger than the objects that people manage to ingest one way or another are the excuses, according to Dreben.

"Sometimes patients tell us that they were doing some type of household chore in the nude when they 'fell' or 'tripped' or 'jumped into bed' and 'landed on the object,'" Dreben said. "Other times, patients are forthcoming in explaining that their predicaments resulted from sexual activity."

Sindhian said that alcohol is also a common excuse, but the younger generation is becoming more forthright.

"Younger people will say that it happened because of a dare," Sindhian said. "But more people are willing to admit that the situation occurred because they were seeking sexual pleasure."

Still, Dreben insists that, regardless of the explanation, a doctor's job is to respect patients and treat the physical issues as well as the emotional ones.

"Therefore, we do not make fun of patients or probe them for more information; and it is not always important for us to know the entirety of the story," he said. "However, we do have to be certain that the patient is safe and that these incidents were not the result of abuse. Physicians are trained to be as non-judgmental as possible; we do not want patients to avoid seeking help because they believe they will be judged by their doctors."

New Book Looks At X-Rays Of Objects Stuck In Patients' Orifices (PHOTOS)
Stuck Up! The Strangest Objects Ever Inserted Into The Human Body 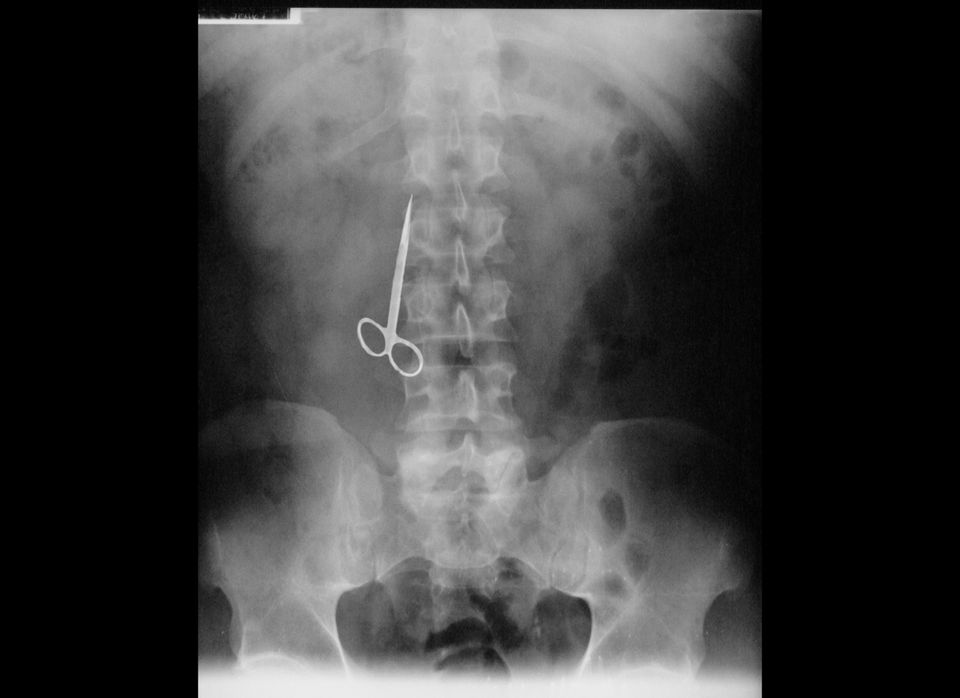 1 / 10
Stuck Up! The Strangest Objects Ever Inserted Into The Human Body
Doctors see a lot of strange things on the job, but perhaps no topic is weirder than the objects that find their way inside peoples' bodies, such as this pair of scissors. That's the topic of "Stuck Up!" a new book by Rich E. Dreben, Murdoc Knight and Marty A. Sindhian, a trio of medical insiders.
Jennifer Hale