While comparisons to Cormac McCarthy's powerful The Road novel seem inevitable, William Luvaas' brilliant new collection of short stories, Ashes Rain Down: A Story Cycle, is a wildly inventive and epic comedy of prophetic visions, and a masterpiece of fiction for our own modern times.

Teetering between the rain-soaked forests of "Sluggards Creek" along the West Coast and a southern California where "there's spontaneous combustion of compost heaps, inflatable rubber pools, and couches stuffed with poly foam, and the choir of St. Jude's Catholic Church in Indio burst into flames singing "Nearer My God To Thee" when the foam lining of their choir robes suddenly ignited," Luvaas manages to weave ten stories into a moving, gripping and often hilarious journey of wily characters -- friends, lovers and conflicted family members -- attempting to navigate the demands of a crumbling world.

In a year of extreme climate disruptions, Luvaas' stories should be required reading -- if only as a reminder of the never-ending quest for food, water, fuel, redemption, understanding, love -- and sex -- in a world shattered by the "forever war," unrelenting natural disasters and unleashed civil disorder, and the power of storytelling to bring some sense and laugh-out-loud humor to the pieces. 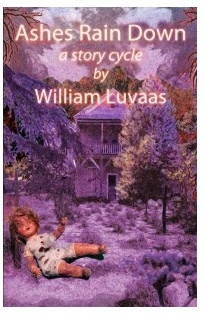 Author of two other collections of stories and an acclaimed novel, Luvaas is one of the most original fiction writers today, whose insight, comic genius and ability to create wonderfully flawed, unforgettable and unsentimental characters remind me of John Kennedy Toole's classic, A Confederacy of Duncees, and the best of Grace Paley's "little disturbances of man."

In the title story, "Ashes Rain Down," Lawr Conne­ry drives two friends to a family burial, in a haunting story where "ashes come from brush fires in the mountains or are sucked up into the stratosphere from that conflagration halfway around the world-The Forever War (some call it "Armageddon")-embers sucked upward on furious thermals that rise off burning cities and oil wells, an indiscriminate crematorium, cooling to ash and falling earthward thousands of miles away." Amid a series of revelations, it is not the singed environment but a family conflict that leads to a burning ground of ruins.

While Luvaas sets up an ominous scene in southern California, in the story "Heat," he allows his characters to rummage for little gems of irony:

"Some blame the greenhouse effect, others say it's the hole in the ozone layer spreading across the continent, and some believe we're sinking toward the molten core of the earth, having pumped all the oil and water out of the ground. The weatherman doesn't give his opinion, just warns us we're in for another scorcher: sixty five straight days now over one-hundred-twenty degrees. A melt alert on the I-10: the fast lane liquefied between Palm Springs and Rancho Mirage. We hear how the AC conked out in an elder hospice in San Bernardino and with it the respiratory systems of three dozen old people. The federal government has just declared the first Regional Heat Disaster Advisory in history."

In the final story, "Family Life," the battered son of a band of wanderers finally confronts his father's errant ways in a moment that transcends a world of depleted resources:

"I walk out then. There's Krista right outside, looking at me like she never seen me before. Like it scares her some to see me now. "Wow, Lester," she says. Inside Dad is telling Mom how sorry he is and hopes she'll forgive him and knows it's anger took hold in him lately and he wants to deal with it. Though I can't see it, I b'lieve he is got his head in her lap and she's stroking his hair and kinda cooing, saying it'll be okay. Maybe, just maybe, he seen hisself in that anger mirror. And maybe it's me held it up for him to see. Though it was crackt, it hadn't broke all to pieces yet. Maybe, just maybe, it never will."

In a certain way, through his powerful prose and dialogues, Luvaas fashions his stories into a mirror for the reader, who will be haunted and beguiled by the same questions in our own lives -- and changing climate.