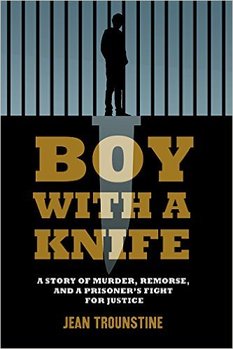 From the opening paragraph Boy With A Knife by Jean Trounstine (IG Publishing, 2016) is not only alarming, it's the best damn book that I've read in quite some time. And this is saying something for nonfiction. While its subject matter is nothing new - juvenile justice is a hot issue in the current age of criminal justice reform - Trounstine's treatment cuts through all of the political rhetoric and tells a story that needs to be told. She simply tells it like it is and forces through a single hard reality: America's juvenile criminal justice policies harm, not help children accused of committing crimes.

To examine this complex and emotionally charged issue, Trounstine profiles the story of Karter Kane Reed, a Massachusetts boy who at age 16 murdered another high school student and was sentenced to life in an adult prison. While the prosecution painted the story as one of a murderer out for blood, Trounstine explores the story beyond the hype. She, in a rather absurd twist, explores all of the facts, something that many were not very inclined to do from the start. Through Boy With A Knife, Trounstine explores not only the crime that Karter committed, but his personal history and even the social and economic culture in which he grew up, all of which led to the perfect storm for his crime to be committed.

But Karter's story is only part of what Boy With A Knife addresses. While he's the human face of the issue, he is only one of many children who become caught up in America's over-bloated, and often under-thought, war on crime. The situation is stark. According to Trounstine, "Nearly a quarter of a million youth are tried, sentenced, or imprisoned as adults every year across the United States. On any given day, 10,000 youth are detained or incarcerated in adult jails and prisons."

For those housed in adult correctional facilities, they are 36 times more likely to commit suicide and 100 percent more likely to be assaulted by staff than their peers housed in facilities for juveniles. This is to say nothing of their higher recidivism rates, which is largely a result of limited programs in adult prisons as compared to ones for juveniles. But these are only the numbers. The culture for incarcerated kids, as described by Trounstine in Boy With A Knife, is much worse, especially as compared to the rest of the world:

"At the time of Karter's sentencing, the United States was a country that set controversial boundaries where childhood ended and adulthood began in terms of criminal responsibility. Until 2005, the U.S. was the only nation that still sanctioned the death penalty for youth. Unlike 194 other countries, the United States, along with Somalia and South Sudan, where the only ones (and still are) not to ratify the Convention on the Rights of the Child, an international treaty designed to protect children from a variety of abuses - including forbidding a life sentence without the possibility of parole."

It's this political comparison that leads to an even greater realization. In the United States, the criminal justice system isn't necessarily just, as one unacquainted with it would assume. Prosecutors often appear to be more concerned with convictions than in ensuring that the punishment fits the crime. They focus on the number of years that can be doled out to people like Karter, not what the right sentence is or other factors surrounding the crime at hand. To put it bluntly, everyone is screwed; those with enough money to retain quality counsel just a little less (albeit still screwed). This concept has been advanced by many before, but Trounstine's way of explaining it is striking:

"There is another Lady Justice, less well-known than the fair-minded goddess that adorns our courthouses. She is Lady Justice Red, a distortion of the icon in robes and blindfold. Lady Justice Red is not the impartial arbiter of cases that come before her. Instead, she looks away from whatever she is judging. Her robes are blotted with blood. She sees what she is paid to see, her vision blurred behind bright red goggles. Her sword lacks the acuity to cut through the evidence for and against those who appear before her. Rather than reason, Lady Justice Red relies on dice, cupped in one side of the Scales of Justice, which she rolls when judging the unfortunate."

Boy With A Knife is Trounstine at her best, perhaps even better than her highly-praised Shakespeare Behind Bars: The Power of Drama in Women's Prison (St. Martin's, 2001), which was also terrific. By the end of the story Trounstine manages to show how through his hardships and copious effort to reinvent himself, Karter Reed has managed to become an anomaly: a man reformed after being exposed to America's criminal justice system. Perhaps it's now time to change the ways we deal with kids who commit crimes - even as heinous as murder - so that others can follow in Karter's footsteps and find their way away from crime, through remorse, and into a productive, law abiding life.