Glenn Beck is an enemy to art, so it will give ARTINFO some degree of pleasure to mock his almost-too-mockable attempt at literature, but even if he offered to fork over all of his earnings from the disgustingly successful novel he recently "wrote" as a gift to fund the arts, ARTINFO would still pan the book. Sure, it's hard to forget about the time that Beck went on an epically long rant about how Rockefeller Center insidiously champions communism with its murals, or the occasion on which he propounded his harebrained notion that the National Endowment of the Arts is really just a gay-rights organization, but that's not why the following 10 criticisms will be harsh. No, what follows is a visceral response to one of the most pathetic efforts to yoke words together that ARTINFO can recall. ARTINFO is angry because ARTINFO lost precious moments of life staring at this hulking mass of nonsense, The Overton Window. 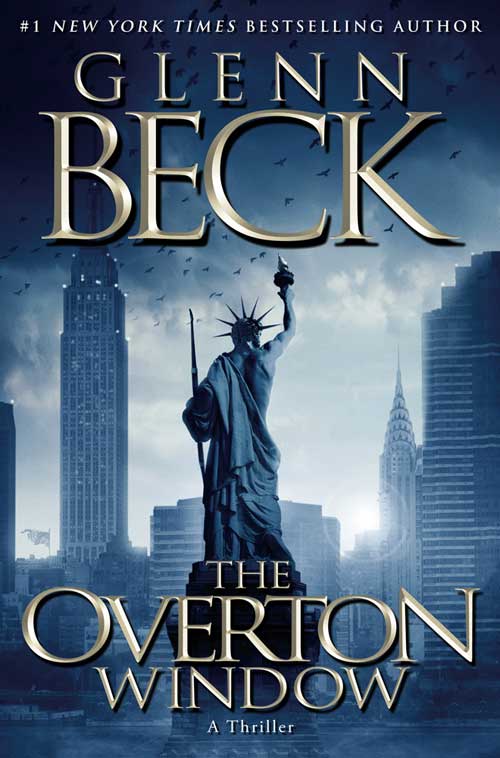 1. The Cover
Early last month, the Huffington Post offered a slide show of possible covers for this novel, along with a chance to electronically submit your own "photoshopped cover" (to whom, it is unclear, and why it had to be photoshopped: also a mystery). It is worth noting that the cover that was ultimately wrapped around this waste of trees and time came in fourth place (out of four) in the public poll. Clearly the final product was a loser from the start. "But wait!" you say. "The cover no doubt offers some insight into what this 'thriller' is about." Not exactly, but it fits nicely with the plot-free, style-free, sounds-like-it-was-constructed-via-email-chain-letter story, for it is, in fact, as confounding as the text it envelops. It depicts a place that's sort of like New York, except the Statue of Liberty is a man (as it should be, clearly) and the flag is flying backwards (ominous) and there are a lot of birds (spooky) and instead of holding a tablet along with a torch, this Gentleman Liberty holds what looks like a harpoon. Or a pool cue. Definitely one of those two things. Thrilling!

2. The Art History Hidden in the Book Flap
Beck got ARTINFO all excited for a minute (when we were pretending not to peruse the flaps on the cross-town bus, just as we once pretended not to be reading the textbook for sixth-grade sexual education class by creatively wrapping its in brown paper) when we saw this: "There is a powerful technique called the Overton Window that can shape our lives, our laws, and our future. It works by manipulating public perception so that ideas previously thought of as radical begin to seem acceptable over time." This book is not about a dystopian future! It is about art history. We love art history, that great web of accounts that allows "ideas previously thought of as radical to begin to seem acceptable over time." But alas, this book is about something else (who knows what).

3. The Acknowledgments
Ah, the acknowledgments, in which Glenn Beck declares of his "insiders": "We're not racist and we're not violent... we're just not silent anymore." Here is a theory: if people are consistently telling you to stop being a violent racist, maybe you should be silent. Then Mr. Chalkboard thanks his family for their support "even when I'm up at 3 a.m. working on projects like this one." First of all, Glenn Beck did not write this book. That will become increasingly clear. If he was up until 3 a.m., it was because he had indigestion or something. Secondly, it distresses ARTINFO to hear Beck talk about "projects like this one" because that implies that there might be more to come. Beck hopes that "this book costs you some precious sleep." Well, we're only on the acknowledgments and can feel a nightmare coming on.

4. On Fact and Faction: A Note from the Author
"While nonfiction books aim to enlighten, the goal of most thrillers is to entertain," Beck explains here. "But there is a category of novels that do both: 'faction' -- completely fictional books with plots rooted in fact, and that is the category I strived for with The Overton Window." ARTINFO would posit that what Beck has described as "faction," is, in fact, a functional definition of "fiction." Books rooted in fact, which are ultimately made up. Yup, that's fiction, all right. By some fluke, Beck is spot on when he admits, "When all is said and done and people look back at this time in the history of our great country, there's only one thing I hope everyone, critics and fans alike, call me... Wrong." Wrong about that whole "faction" thing, that's for sure.

5. Glenn Beck Describes Art and How Women Are Actually Drawings
Beck: "More powerful than any other element of design, a line is the living soul of a piece of art. It's the reason a simple logo can be worth tens of millions of dollars to a corporation. It's the thing that makes you believe that a certain car, or a pair of sunglasses, or the cut of a jacket can make you into the person you want to be. The definition he'd received from an artist friend was rendered not in words but in a picture. Just seven light strokes of a felt-tip marker on a blank white page and before his eyes appeared the purest essence of a woman. There was nothing lewd about it, but it was the sexiest drawing Noah had ever seen in his life. And that is what struck him. There it was at the bulletin board, that same exquisite line, from the toes of her sandals all the long, lovely way up to her fingertips. Unlikely as it must seem, he knew right then that he was in love." Here's the distilled version: Lines are the basic units of larger designs. Some designs are better than others. Some people like to buy pretty things to feel better about themselves. Glenn Beck (or wait, phew, no, just his protagonist) has an artist friend. Women are like designs and some of them are like pretty things you can buy to feel better about yourself. Women are art! Just don't let them talk.

6. What?
Some characters are introduced. Someone is shot. It doesn't appear that this shooting will ever be resolved.

7. Is?
Some other characters are introduced. Characters previously introduced, for no apparent reason, will never return.

8. Going?
It appears that some people are in love -- with each other. Or America. Or maybe both.

10. The Afterword
"We chose this title because it's also a technique that to one extent or another, we just used on you. (The key difference is, I'm openly telling you that's what I'm doing; I don't have a hidden agenda here.)" No! No! You told us in the afterword? That doesn't count. Glenn Beck, did you just try to brainwash ARTINFO and then admit it? What will you do next? Ah, yes, you will direct your reader to Google to search for things, to follow links to Web sites that actually have the news stories to which you are alluding in your own inept and heavy-handed way. If your reader obeys, he or she will spend more time on the Internet than he or she spent reading your book. And then The Overton Window offers one more thing to keep us from ever sleeping again: "We've also started a Web site, the address of which is listed somewhere in this book, that will link to many of the sources we used and will also serve as a repository for new information as it develops. Happy hunting!" Hold on, when did the first-person singular voice of the Author's Note change to this odd first-person plural. Who is this "we"? Of course it is the people who actually wrote this book, Beck's "contributors": Kevin Balfe, Emily Bestler, and Jack Henderson. ARTINFO's condolences to you, Balfe, Bestler, and Henderson.

Visit ARTINFO to read the original Guide to Glenn Beck's New Novel and get your updated art and culture news.

Follow ARTINFO on Foursquare to get more insider tips on New York's art and culture scenes.