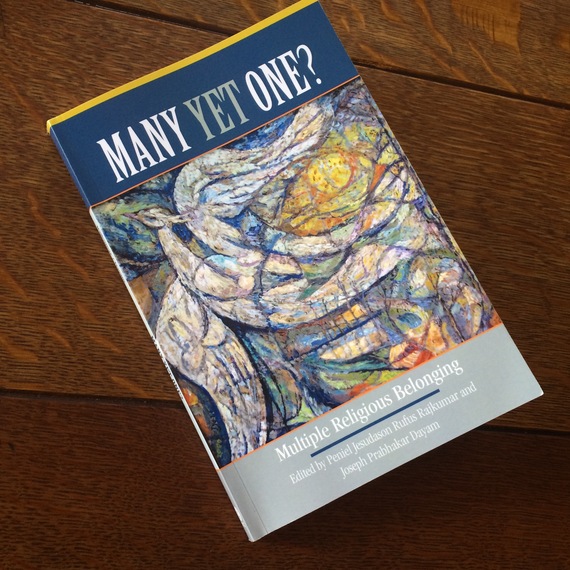 As someone born into an interfaith family, I am attracted to synergy, hybridity, complexity, and convergence. Lately, I see a moment of convergence approaching, when my progressive Jewish communities and my progressive Christian communities might begin to engage with each other on the topic of interfaith families, multiple religious practice, and complex religious identities. This moment cannot come too soon.

In the Jewish world, conversations about interfaith families have historically taken place as part of a fraught discourse on the threat of "intermarriage" to Jewish continuity and worries about confused children. Meanwhile, a separate but parallel conversation has been occurring, first among Catholic theologians and academics, and more recently in the progressive Protestant world, under the labels of "hybridity" and "multiple religious belonging" (sometimes shortened to MRB). In this literature, there has been a growing realization that multiple religious practice is actually the norm, rather than the exception, in much of Asia, and among many American Indian and other indigenous peoples as a result of colonization, cultural disruption, and diaspora.

And so it was that in 2014, the World Council of Churches gathered theologians and academics in Chennai, India, for a conference on multiple religious belonging. Rev. Karen Georgia Thompson of the United Church of Christ traveled to India for the conference. She then organized two consultations in the US, in order to connect clergy to theologians thinking and writing about this new reality. I was honored to present my research on interfaith families and interfaith identities at the first of these US events.

Now, a new book of essays published by the World Council of Churches, Many Yet One? Multiple Religious Belonging (edited by Peniel Jesudason Rufus Rajkumar and Joseph Prabhakar Dayam), brings together more than a dozen of these theologians, academics, and clergy, many of them Asian or Asian-American. The academic and theological language here can be dense and at times exhausting for even the most interested general reader (that would be me). For example, I am glad I happened to go to a university that offered a semiotics major, and so had some acquaintance with the work of French postmodern philosopher Jacques Derrida.

And yet, this slim volume is essential reading to those of us from interfaith families and other multiple religious practitioners engaged in defining ourselves, and in creating new spaces in which to do that. These essays describe, explain, and restore the religious plurality and complexity found in whole cultures, and in individuals. In so doing, this book has become my new bible, if you will, because it probes, affirms and illuminates much that is positive about my experience as someone with a complex religious identity.

Some of the essays focus primarily on Christians who become dual-faith practitioners after taking on Buddhist or Hindu practices. Others focus on the dual-faith practice in areas of Asia where this has long been the norm. At least some of the essays mention interfaith families as a source of multiple religious practice. Of course, all the writers here are looking at this topic through a Christian lens (or a "Christian and" hyphenated perspective). But after spending so much time defending interfaith families in the Jewish world, it was intellectually refreshing to be immersed in the world of Christianities.

In reading this book, I penciled in a hail of asterisks and exclamation points on almost every page. I could, should, and still may write a whole post in response to each essay in this volume. For now, I am going to simply cite a list of just some of the phrases that made me so excited about this book:

The editors, Rajkumar and Dayam, conclude by urging churches to "move beyond tacit obliviousness and engage robustly with the phenomenon of multiple religious belonging." This book will help Christian communities to do that. But as a bridge-builder, a synthesizer, a complex, hybrid person, I am waiting for the creation of a shared language to communicate with each other across religious boundaries. Specifically, I still wait for the time when my Jewish and my Christian communities figure out how to work together to welcome, engage, and learn from those of us who rejoice in our interfaith identities. I wait for a book like this one, written not with a Jewish lens, or a Christian lens, but by, for, and about those of us with multireligious "both-and" perspectives.