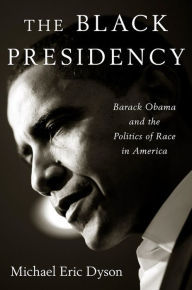 "If I had a son, he would look like Trayvon Martin." President Obama's empathy-filled words spoken after the murder of Travon Martin resonated deeply throughout black America. They conveyed a sense of "I feel what you feel" to African Americans who shed a tear over what felt like another lawful murder of a young black man. Such a message coming from the most powerful man in the world in reference to race was promising. It alluded to the possibility of having the Commander in Chief who would speak openly about the nation's deepest racial woes and tackle the issues head on. Yet is this true? Do we have a president who is taking on race directly with great empathy for the black community?

In Michael Eric Dyson's nuanced new book, The Black Presidency: Barack Obama and the Politics of Race in America, the revered academic and cultural critic writes with candor, passion, and understanding about this nation's first black President. True to his form as a professor, Dyson writes in a way that prompts readers to explore their own previously held cognitions about race in the era of Obama while sympathetically and honestly exploring how the president himself measured up on the difficult task of responding to race. From the protests in Ferguson to the church shooting in Charleston, South Carolina, to the controversy over the arrest of Harvard professor Henry Louis Gates, Michael Eric Dyson leaves no stone unturned as he unpacks how President Obama has changed how he talks about race over the past seven years. Dyson examines Obama's speeches and statements on race, from his first presidential campaign through recent events.

The brilliance of this book is how masterfully Dyson captures a proverbial conversation between generations of black Americans from a range of backgrounds. Imagine, if you will, a private conversation about President Obama that included an older relative who marched with Dr. King; a smart cousin who isn't politically savvy but instinctively feels protective of the president; your respectability politics-loving aunt; the bell hooks-quoting sister; and your young black lives matter activist brother. This conversation would be passionate, challenging, smart and raw. Each person would speak about the president in a way that is unique to their perspective and offer balanced feedback. If moderated by a party that is fair, analytical, and politically knowledgeable, this conversation would be profound. Consider this book a sort of moderated conversation between the above- mentioned parties, offering the same profound and analytical discourse.