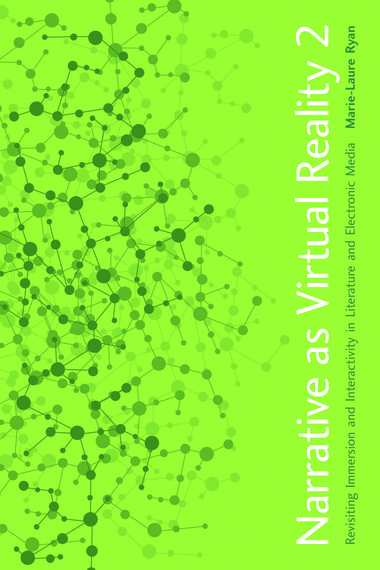 Marie-Laure Ryan's Narrative as Virtual Reality 2 looks at VR through the lens of reading and writing.

This is the first in a series of posts that will focus on Virtual Reality as an emerging art form.

This lucidly written updated book by independent literary scholar Marie-Laure Ryan addresses virtual reality (VR) not as a medium associated with specific hardware, but more loosely as a form of storytelling primarily concerned with immersion and interactivity. Noting "we may still have to wait a few years to see whether the promises and threats associated with VR will materialize," Ryan focuses on the dominant narrative form of the 20th century: text. This approach is remarkably helpful in placing VR in a continuum of storytelling and media (visual art, conventional and digital literature especially hypertext, and computer games) and pre-digital immersive experiences like Baroque architecture, children's make-believe, ritual, and some forms of theater such as Artaud's Theater of Cruelty. Moreover, in adopting a looser definition of virtuality, Ryan mostly avoids making definitive or "how-to" statements about this still emerging art form. Instead, by elucidating key elements such as gesture, spatiality, temporal and emotional immersion and important dynamics such as interactivity vs. immersion, game vs. world, and signification vs. simulation, Narrative as Virtual Reality 2 provides a framework for asking the right questions about storytelling in VR. 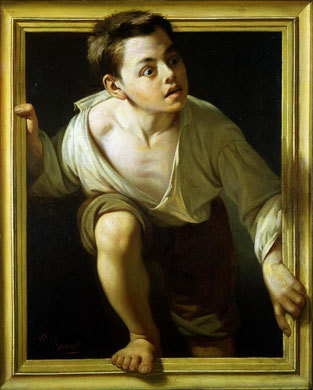 In a concise, but encompassing introduction, Ryan traces historical changes in the visual and literary arts relating to immersion and interactivity. She points out that the discovery of Cartesian perspective changed the "semiotic mode" from signification in Pre-Renaissance painting to one of simulation which reached its pinnacle in the trompe-l'oeil frescos of Baroque churches, only to be disrupted again by modernist abstraction and cubism. Likewise, literature at various points took a "linguistic turn...privileged form over content, and emphasized spatial relations between words, puns, intertextual allusion, parody and self referentiality." In this way, Ryan introduces the major theme of the book: the complex and sometimes oppositional relationship between user interactivity and immersion.

Because this is not a philosophical or historical treatise, Ryan provides only a brief but fascinating analysis of three kinds of virtuality that operate in VR: optical ("the virtual as illusion"), scholastic ("the virtual as potential" or as "information"), and technological ("the virtual as computer-mediated"). Although she touches on relevant critical theory, contrasting the "two faces" of the virtual: Jean Baudrillard's characterization of it as a "fake" that will lead to "radical disillusion" and Pierre Lévy's more optimistic vision of the virtual as "potential," her analysis here, too, is necessarily prefatory. Similarly, Ryan offers an interesting, but limited discussion of the multifarious concept of presence. In suggesting that presence requires a "photorealistic display" and "mobility of the user's body with respect to the 'present' object," she convincingly relates presence to Maurice Merleau-Ponty's phenomenological writings on the "embodied nature of consciousness." However, in so doing, she fails to adequately address other aspects, including social and cultural presence, and does not delve into how this differs from concept of "absence" --attention to internal imagery such as occurs when someone is engrossed in a novel.

Although Ryan does not detail how technological extensions might alter the virtual body's relationship to time, space, subjective identity, or sensual perception or how this might alter the experience of presence, she judiciously admits: "I believe that even in a post-modern society, selves are not uniformly diverse, and no theory can speak for the many ways in which we may relate to virtual bodies and virtual personae that we adopt in cyberspace." However, she then goes on to suggest that the holodeck from the Star Trek T.V. series which exemplifies what VR pioneer Brenda Laurel calls the "elusive unicorn" of unified interactive and immersive narrative, is to be lauded as a kind of "total art." Although Ryan's dissection of a hypothetical user experience in the holo-deck is indeed instructive for thinking through the individual components that comprise its virtual narrativity, Ryan does not explore the possibility that a realistic, effortless user experience is not universally desirable and is, at least in part, culturally dictated by its origins namely Hollywood. Moreover, two of the components she describes: "transparency of the medium" and "dream of a natural language" raise troubling questions which Ryan does not pursue. Quoting Jaron Lanier, "With a VR system you don't see the computer anymore--it's gone. All that's there is you," Ryan notes "transparency is a precondition for total immersion in a medium-created world," a statement that seems to ignore the dynamic formation of self-consciousness which she ascribes to Merleau-Ponty. Even more problematic is the notion that, "in an advanced VR system...the system will encompass all forms of representation, action, and signification. The multi sensory will also be the omnisemiotic." In letting such a radical statement stand unexamined, Ryan ignores the political and cultural underpinnings of this vision of virtual reality although she later revisits it in a chapter on "dysfunctional" digital texts. These are works which undermine the transparency of the medium by playing with conventional uses of code, rules, interface, and language. Regrettably, the history of film, which might have provided further insight, is not referenced at all.

Despite the shortcomings of her text-centered approach, by discussing virtuality in terms of the of reading and writing, Ryan allows even those without a working knowledge of VR to understand "the poetics of immersion." In the second section of the book, she draws from research in the fields of cognitive psychology, analytic philosophy, and phenomenology to offer several productive metaphors for how texts produce immersion. Ryan goes on to describe the "mental operations and textual features" that create three types of immersion: spatial, temporal and emotional using examples from texts by Proust, Sebald, Joyce and others.

In the third section of the book, Ryan decries the postmodernist tendency to reject reader immersion as "incompatible with self-reflectivity." Instead, she explores ways to "restore contact with the surface" through interactivity. Here, she provides an intriguing analysis of "text as game," a metaphor which she compares and contrasts with "text as world." In the final two chapters of this section, Ryan uses her own taxonomy to analyze and diagram patterns of interactivity found in electronic literature and computer games, concluding this section with an in-depth analysis of what she calls the "exploratory external" interactivity of hypertext. Again, although these considerations are not directly applicable to VR, broad-minded readers will be rewarded with novel ways to approach the competing demands for immersion, cohesive narrative design and user freedom.

Having spent the majority of the book analyzing text, Ryan ends with a perhaps unavoidably hurried analysis of more recent forms of virtuality:multimodal stories, alternative reality games (ARG's), locative narrative, and early VR. These are the weakest chapters in the book, for, what makes Narrative as Virtual Reality 2 so worthwhile, is precisely its focus on reading and writing. Although Ryan privileges the unification of interactivity, immersion, and narrativity as exemplified by the holo-deck, her literary approach allows her to raise fundamental questions about the nature of these concepts without making delimiting pronouncements. The fact is that there are many reasons one might create in virtual reality including a desire to investigate the nature of a presence, sensual perception, identity, consciousness and empathy and these explorations may require different approaches. Moreover, VR encourages novel collaborations between writers, visual artists, composers, scientists, designers, software developers, engineers and programmers. In future postings, I will be presenting artists who are working with VR in these varied ways. In the meantime, Ryan's book makes an invaluable introduction to key ideas and questions related to this exciting and evolving medium.

My next post will review the art of Rachel Rossin, an up-and-coming multimedia artist and Virtual Reality Fellow in residence at NEW INC., the New Museum's incubator lab.