Annabel Hertz's first foray into historical fiction, Seeing Green, is energetic, witty, and timely. It's heroine, Arcani Kirsch, is a half-Hopi, half Jew-Bu (synthesis of Judaism and Buddhism) Californian on a mission to puncture the stasis of Reagan-Bush environmental policy. She displays an enlightened sensitivity to and awareness of the plights of those most affected by the Anthropocene era in which we are living.

Her resolve to represent them at The Table is commendable and is one of her defining characteristics. The other is a keen sense of humor and irony on display throughout this entertaining and informative novel set during the heady days of Bill Clinton's first presidential campaign and the Rio Earth Summit in 1992. Hertz's timing couldn't be more impeccable: the Rio+20 Earth Summit is just four months from now. 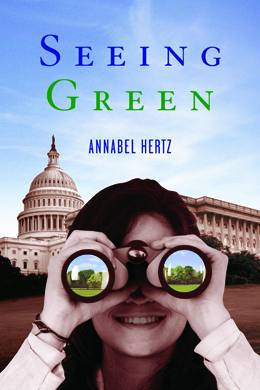 Arcani Kirsch, Jew-Bu extraordinaire, is a memorable and complex character on multiple levels. She tries to live her life paying homage to the spirituality of her ancestors, but embraces modernity and liberalism. She lives to forward action around ideas, but gets tripped up by her many conflicts with and attachments to people. She desires commitment and intimacy, but is a bit of a globetrotting man-eater. She changes longitude and latitude enough to create not a love triangle, but an irregular, concave, love quadrilateral with an exceptionally small acute angle nestled comfortably away from its counterparts.

She epitomizes the Shakespearean quote that "the course of true love never did run smooth", but to her defense, encounters tainted love due to her openness and willingness to engage the world, and evaluates her suitors fairly with rationale and intuition.

Arcani is at her best as she resolutely exerts her will on U.S. environmental policy despite its monolithic stature. She has the magnificent intention of increasing the odds that the U.S. government will commit to supporting UN-sponsored initiatives, not starving them. To do so she must tread carefully as a low-level staff member for EnvironMentality -- a Washington-based NGO representing environmentally conscious Small-to-Medium Enterprises, for as Madison articulated best in Federalist No. 10, "ambition must be made to counteract ambition."

She (mostly) smoothly navigates around the higher ups and a sinister subversive in her own organization, Senators and their staffs, and even bonds with Vice President Gore at an Inaugural Ball. Her exploits are pure wonkish-politico delight as agendas are set, budgets are allocated, and influence is built and exerted. As one of the suitors expresses midway through Seeing Green, "It sounds (and is) very Washington."

Hertz, as much of a fireplug in real life as Kirsch is in Seeing Green, weighs in on other issues throughout the novel, such as the mistreatment of Native Americans and their culture, glass ceilings and wage inequalities, and organized, dogmatic religions. She is suspicious of dominant cultures and people who extinguish the aspirations and dignity of the less powerful. She is indignant towards authority which ignores its obligations to its citizens. Hertz essentially attempts to do her part, utilizing the power of literature to "repair the world," as her Jewish ancestors wisely count among the highest human pursuits.

Seeing Green is being published at a time when governments around the globe are seeing red. Commitments and resources for climate change, or depending on your leanings, climate crisis, are unlikely to increase at Rio+20.

Despite the lack of financial wherewithal, it will be helpful if this next installment of high-profile environmental discourse focuses on increasing awareness that we are living in the Anthropocene Era. Mankind is in fact a leading, if not the leading, factor affecting the various spheres and cycles of this gigantic rock we call Earth.

Arcani Kirsch, fictional character though she may be, was intimately aware of the effects of mankind on the environment a generation ago. She took steps both large and small to make a difference. In doing so, she provides an example of how we need to be analyzing these sticky issues and how we can go forward boldly to address them.