In his third book, Talk to Me, Author, Qasim Rashid continues his jihad of the pen. His book, The Wrong Kind of Muslim, shined a light on the persecution of Ahmadiyya Muslims in Pakistan while his second book, Extremist, took on renowned extremist-Islamophobe, Geert Wilders.

In Talk to Me, Rashid takes his activism to the streets and walks the walk, creating dialogue as well as interfaith and inter-racial understanding through storytelling - both in his own voice and by sharing his pen with a cast of heartfelt contributors. From renowned lawyer and activist Rabia Chaudry's story of emerging from domestic violence as a single mother to aid those facing insurmountable human rights challenges - to a Catholic man who rose above anger and depression after losing his wife and daughter on 9-11, becoming an agent of goodwill, peace and bridge-building.

The story of Robert, a Christian who reverted to Islam, touched me the most. It forced me to look critically at the Muslim community and the work we still need to do to better support reverts. I've always seen new Muslims as stronger than me in so many ways. They sometimes face disapproval from their family and friends and have gone through an immense spiritual journey to arrive at their decision to convert to Islam. This usually means they are firm in their conviction and ready to take on the next steps of acclimating to a new, Muslim lifestyle and community. If they happen to approach a community member who is not sensitive to their needs or frankly - shouldn't be in a position of authority - they are often sideswiped by confusion and disappointment.

In chapter 19, Lisa Thweatt, a black mother to two boys opens her soul to the struggles of raising black youth in our xenophobic society. As a mother myself, I felt her every emotion as she described injustices perpetrated onto her children- ones my white children will never experience. Her story left me with a gaping hole in my heart and feelings of guilt and grief. But it also left me impressed by the relatable resolve and resilience of motherhood. 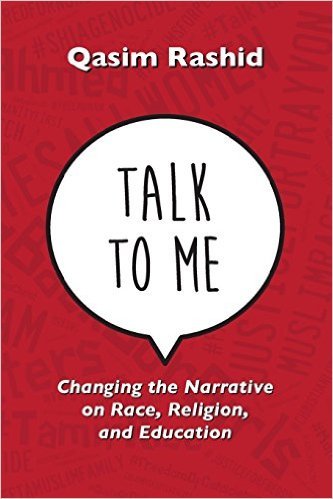 There is the story of Nusrat Jehan Chaudhry, a NICU nurse who never was able to become a mother herself, though she has mothered a legion of souls, premature babies, many who died- some in her arms. She has comforted grieving mothers whilst grieving herself. She celebrates Mother's Day, accepting the motherhood experience God gave her as a mother angel to our sickest babies.

There are Rashid's own stories of facing bigotry as a brown man and standing by while a DMV worker tells his wife to "take that rag off your head" before being photographed for her driver's license to stories of people he has met on his life journey that have left an indelible impact on his life.

Lee Weissman, otherwise known as "Jihadi Jew" in the interfaith activist circle, talks in chapter 31. I have interacted with Lee through my work on the MyJihad campaign. His kindness and compassion is inimitable and I found myself smiling from ear to ear reading his words. He is staunchly dedicated to building bridges between the Muslim and Jewish communities and fighting the disease of the heart: hatred. I can say that his example has changed me as a person - though I am continuously a work in progress.

Jewish tradition teaches that thousands of years ago, Abraham had a tent that was open on all four sides. He never preached. He fed people and conversed with them about the one God he had come to know. He built relationships and modeled a path of love. All I have done is taken a few steps on that well-worn path.

I'm now an idealistic man fifty-five-year-old man, but I'm not just sitting in front of the White House. I want to invite you to my house and join you in yours. I still seek wisdom and honesty with the same passion as that twenty-two-year-old.

Only now, I know that we can get there, together, if only we take the time to talk to one another. ~Lee Weissman aka Jihadi Jew

Qasim Rashid writes because he is compelled to make the world a better place. Talk To Me is quintessentially Qasim, where he digs deep at an emotional depth that is needed in our fragile society where fear and exceptionalism continue to drive wedges in our communities. Give this book as a graduation gift to our youth - the ones who will be leaders in our society in the coming years. Give this book to anyone you want to inspire. Read it to try and walk in someone else's shoes.

Talk to Me can be found here at Amazon.