Having been a frequent visitor to the beautiful countryside of New England, traveling a byroad or ambling along on Amtrak, it's impossible not to notice the astounding quantity of stone walls or piles that are simply everywhere. Composed mostly of grey granite, they meander hither and yon, up ridges and along ancient streams. They are rarely spoken of, or thought of much either I suppose, and there's a general sense that they were built some time by our industrious pioneer forebears, early Europeans who were clearing fields or building fences to keep their livestock from wandering off. 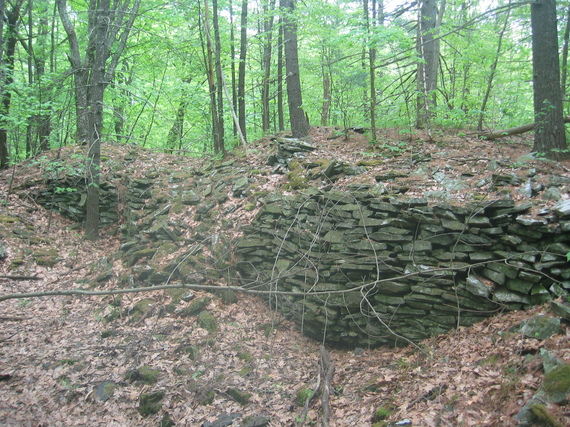 How mind-blowing, then, to stumble upon a book such as Matt Bua's Talking Walls: Casting Out the Post-Contact Stone-Wall-Building Myth, recently published by Publication Studio Hudson in Catskill, NY. While the myth of pioneers building this colossal earthworks has a veneer of warm, fuzzy wholesomeness at first blush, Bua's closer examination of the revelant facts makes this no more likely to be true than any other fairy tale. Bua keeps the book moving through crisp prose, thankfully keeping the minutia and more detail-oriented asides in a long footnotes section. He succintly lays out many cogent arguments that point to the likely historical source of these walls being constructed over a much longer time period, and for perhaps less banal reasons than mere livestock enclosure, well before any Europeans set foot on New England's rocky shores. 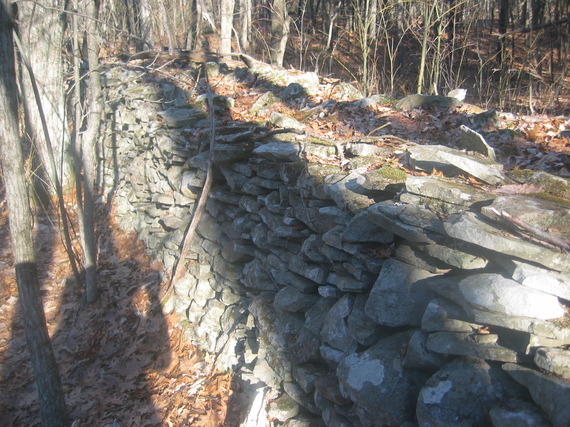 Here are the highlights:

First off, when one actually looks at them, the walls make no sense as livestock enclosures or for property line demarcations. They are erratic, often meandering over mountaintops and stopping abrupting at waterways. They have numerous secondary features such as large (8' or more) cone-shaped cairns that make absolutely no sense for time and energy strapped pioneers who also had to farm, build homes and barns, chop wood, and all the rest.

Secondly, there are simply too many walls, and not nearly enough people and time in the pioneer days, to come even remotely close to having enough labor to build all those walls. Given a timeframe of roughly 250 years (1620-1870), and if the population of New England all worked on these walls continuously with one day off a week and three months off for winter, they would need to construct roughly four miles of stone walls a day, or about a foot of wall every two seconds. Hell, maybe there were a few Paul Bunyun types back then that could have busted that out...and then maybe spent their nights farming and chopping wood...but everyone? For 250 years? Folks, that ain't right. 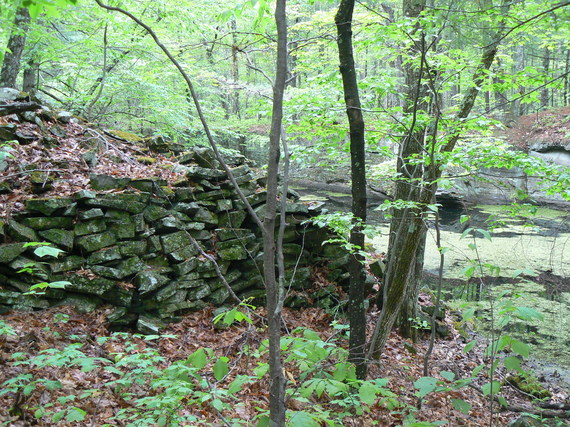 Thirdly, you would think that such a gargantuan undertaking would be written about somewhere, at least in someone's diary, at least once, right? "Alexander came down with the flu today. The sow birthed six piglets. Built twelve miles of stone wall today." But alas, no. Okay, I know what you're thinking - they were too tired to write about it. But really? No one?

So, who built them? How about the folks that were here before us? Native Americans built them. For what? Mr. Bua has lots of ideas on this score, and I'm not going to give everything away in this review. But consider the fact that elsewhere in the Americas, North and South, large earthworks and colossal structures are the norm, not the exception. And consider that New England was inhabited for ten millennia before the European colonists showed up...and then read this great book and let Mr. Bua pry your mind open to what might really have gone down with all those stone walls.