I was at a party recently, and talk turned to prejudices we carry and wish we didn't. Of course, Muslim women who wear burqas came up in conversation. I am ashamed to admit that while I consider myself very accepting of other cultures, seeing fully covered women in public makes me unsettled, and yes, a little afraid--not of the women, but of the men they are with. I assume the women are oppressed and probably beaten. I turn my eyes away and wish I were a better person.

I don't want to be like that. I don't want to fear other cultures or make blind assumptions. I want to really understand what it is like to be a middle eastern woman, why they may choose to cover themselves, and how they feel about their culture.

Unfortunately, I have never had an opportunity to ask any of these women about their lives. I live in an area with a higher Muslim population than I ever have before, and while I am on a first-name basis with some Muslim women, I feel awkward going up to someone at a playground or school function and say, "Hey! Let's talk about burqas and sexism and what it's like to be Middle Eastern, because you are the token woman with a head scarf here and must therefore be an ambassador for your entire culture!"

(You only have to do this a few times with people of different cultures before you will have the entire bench at the playground to yourself.)

Luckily, I stumbled on this small book by Soad Nasr: 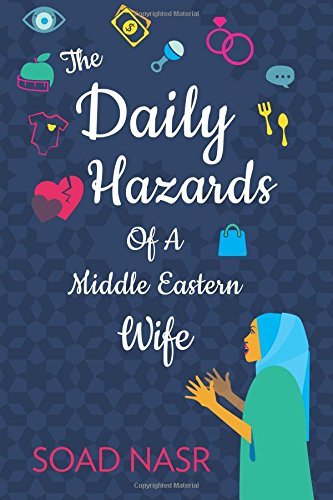 I am no writer. You will not see any articulate phrases or any profound similes or metaphors in this book, just plain, direct thoughts....The reason I say this is that I am a chemist--or at least I think I am, or at least I am aiming to be so--a professional chemist...So this is the aim of this book: the daily hazards of a Middle Eastern wife will be candidly revealed. I will fearlessly present the different cultures and traditions a Middle Eastern wife will probably experience. (Introduction)

I love the idea that someone who didn't consider herself a writer was willing to take such a risk to help us understand a culture that is often judged harshly by others who are ignorant as to what their life is really like. Additionally, she admits that, "And as you might expect from some Arabs who disagree with something, they may want to kill me...man, do I have to hide somewhere! (Introduction)." My writing friends and I often discuss the ramifications of writing memoir and other personal forms of creative nonfiction, but none of us have to worry about honor killing.

Beyond being courageous, Soad Nasr's voice is fresh and crisp. This results in a friendly tone that is easy to access for people of all backgrounds. For example:

Of course there are always the minute population of women who just love cleaning the house and seem to enjoy it. These women should be locked up somewhere, because they make us look bad. (Nasr, pg. 55)

I guess we aren't so different after all. This is the point Nasr makes over and over in her book--although she explains the differences in our two cultures, she also reinforces the ways we are the same. She is also quick to point out the ways that she is not a typical Egyptian wife--the privileges she has that many other women don't. And she isn't afraid to criticize her culture and discuss ways it could be improved.

The older a woman becomes, the more independent, financially stable, and confident she will be. In other parts of the world, these traits are viewed as positive things, but in the Arab world, they are something to be scared of. A woman should be young, naive, and dependent, and she should still have no idea what she wants to do with her life. This way, the man (husband) can manipulate her and direct her more easily. And since she has not yet discovered who she is, she will not give the husband a hard time. What an approach! Splendid. (Nasr, pg. 117)

And that burqa discussion I mentioned at the beginning of this post? Nasr includes many photographs throughout her book as well as a handy chart explaining the 7 different ways a woman can dress in the Middle East. Additionally, Nasr writes on the traditions and rituals of marriage, childbirth and the state of hospitals, the evil eye, politics, and the ex-pat experience, all with a lighthearted, funny tone, but one that is careful to remain respectful of her roots. Her voice is often reminiscent of an advice manual as she tries to explain best practices for dealing with tradition and relatives.

Never be fooled by the cuteness of a baby. They seem innocent at first, but the truth is they are extremely demanding, inconsiderate, and unappreciative creatures. (Nasr, pg. 77)

Her conversational tone pulls the reader in, so that I felt like a new friend she was explaining her customs to, and not an unwelcome voyeur peeking through a window. Humorous, lighthearted, respectful but not unduly submissive, Soad Nasr's book gives a glimpse into one woman's life in the Middle East that will break down stereotypes and create space for real understanding.

Nasr's book is available in paperback and Kindle at :
Amazon.