Michael Mann has arguably been subjected to more abuse than any other scientist in modern history. For over a decade he has endured an unimaginable torrent of hate and vitriol inflamed by fossil-fuel-funded interests, politicians, and right-wing pundits, and stoked by a growing wild-west blogosphere in which anybody can be an "expert," and everybody can pile on.

Mann has been publicly vilified, accused of lying, cheating, stealing public funds, and torturing kittens. Well, maybe not that last thing, but if you searched the internet hard enough you could probably find something along those lines. The most extreme attacks appear in comments sections of the many websites that are devoted to the idea that climate research is inherently dishonest and corrupt. Anonymity provides courage and cover, and "legitimate" bloggers can fan the flames without taking responsibility.

How did one scientist become such a lightning rod, and how did he come to personify the notion of "crooked science" promoted by the industrial global-warming-denial complex and their uninformed but motivated foot soldiers and patsies? The Hockey Stick and the Climate Wars provides Mann's own account of what led him into a newly evolved ecological niche that some subset of climate scientists are destined to occupy. 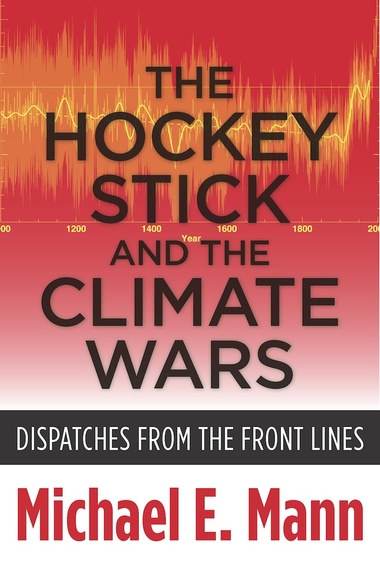 In his book, he uses a different ecological metaphor, describing what he calls the "Serengeti strategy," in which "climate change deniers isolate individual scientists just as predators on the Serengeti Plain of Africa hunt their prey: picking off vulnerable individuals from the rest of the herd." Humans have some behavioral attributes that make this more than an apt analogy. After all, we evolved on the African savanna where our hunting and tribal instincts were honed.

But humans are not a pack of hyenas, and hyena-like behavior is generally frowned upon by civilized society. Mobs tend to emerge and attack when there is anonymity, numbers, and anger. In this case, the internet provided the fuel, but the ignition was orchestrated by a well-financed cabal of political pressure groups (the Heartland Institute is one of the most prominent) and their allies.

Their most effective spark was a furor they created over the "hockey stick graph," a plot of temperature history of northern hemisphere for the last thousand years. It was based primarily on paleoclimate data (tree rings, corals, stalactites, and other "proxies") combined with actual measurements after thermometers were invented and weather was recorded around the world during the last century and a half or so.

When the first version of the hockey stick was published by Mann and two coauthors in 1998, it got a lot of press but was not particularly controversial within the scientific community. I happened to be taking graduate courses in physical climatology and paleoclimatology at the time, so I read it with interest. Like Mann, I am a physicist and know that the laws of physics are inescapable. The atmospheric energy imbalance we have created is causing our planet to heat up. Mann's paper wasn't proof, it was just one more independent line of evidence, complete with careful analysis and rigorous uncertainty quantification: "error bars."

As Mann describes it, the real trouble began in 2001 with the publication of an updated version of the hockey stick in the Intergovernmental Panel on Climate Change Third Assessment Report, in which this notoriously cautious organization first used the word "likely" to refer to the unprecedented degree of warming. The hockey stick became a symbol that both sides could rally around, but as such it became a target, and so did its author. One can of course read all about it on Wikipedia, but Mann provides the nuance and detail of someone who is personally involved.

The most entertaining (but aggravating) part of the book begins after about 100 pages of introductory and background material, where Mann describes the Keystone-Cop-like tactics of his critics and takes on their arguments one after another. He provides the facts to counter their most widely repeated memes: "Mann refused to divulge his data and statistical algorithms," "the hockey stick is a statistical artifact," and "he made the medieval warm period disappear." He makes short work of the "Climategate" conspiracy theory for which he has been formally, and repeatedly, exonerated.

In 1998, when the first hockey stick paper was published, Mann was a relatively obscure post-doctoral researcher working in the somewhat unglamorous field of paleoclimatology. The hockey stick graph has passed the test of time. It has been replicated many times. Similar graphs have been published by independent researchers around the world. Mann is now a highly regarded professor, director of a prestigious institute, and recipient of many honors, including the Hans Oeschger Medal of the European Geosciences Union and a share of the 2007 Nobel Peace Prize.

His tormenters, for the most part, have become laughingstocks (at least within the scientific community)--or worse. For example, the author of the report commissioned by a member of Congress critical of Mann's conclusions was found to have committed academic misconduct for plagiarism, and lost his role as editor-in-chief of a statistics journal.

Many of Mann's other critics have had their work torn apart. Satellite data that supposedly showed global cooling needed to be corrected repeatedly because the hapless researchers continually forgot to make critical corrections (and in one case, introduced them with a sign error, subtracting instead of adding). The corrected data shows global warming. Another critic published a paper based on data that came out of a computer program in which an angle was represented in degrees when it was supposed to be in radians. You won't read about any of these bonehead mistakes in the denialist literature. On the contrary, you will still see the original (incorrect) results cited on blogs and in letters to the editor.

Michael Mann's professional success has spectacularly demonstrated that the denialists' Serengeti strategy doesn't work. First, they made the mistake of attacking the strongest, not the weakest. Second, scientists are not a herd. We don't try to blend in to avoid being noticed. When we are attacked, we don't get weak-kneed and go down while everyone else runs away scared. We fight back. Michael Mann and his colleagues continue to demonstrate that trait in a most impressive way.

When the hyenas finally realize they've been lied to by powerful manipulators--and that they are suffering the costly consequences of global warming just like the rest of us--will they turn their teeth in the other direction?

The Serengeti is a tough place.