In Robert Blachford's 1906 book Not Guilty: A Defense of the Bottom Dog he wrote of free will:

We are to ask whether it is true that everything a man does is the only thing he could do, at the instant of his doing it.

This is a very important question, because if the answer is yes, all praise and all blame are undeserved.

All praise and all blame.

In this argument, Blachford argued that if we don't have free will and are unable to control our actions, we cannot be found guilty for our actions, and at the same time, cannot be praised for our good deeds. A troublesome thought to the murders, rapists, and pedophiles behind bars today. Can we really say they are not guilty of their crimes? 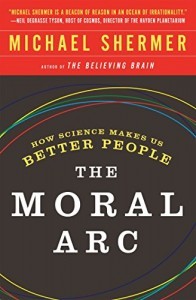 Most philosophers would not take it this far, not even Sam Harris in his book Free Will seems to allude that no one deserves praise or blame for one's actions.

Yet, the debate on free will leaves us with a moral dilemma. Can we hold others accountable if free will does not exist?

Michael Shermer attempts to answers this in his latest book The Moral Arc: How Science Makes Us Better People.

Shermer looks at the evidence for determinism, and there is a lot of it, that shows we are in less control than we think. However, Shermer argues that there are four important parts of free will that in the end, do leave us more in control than hard determinists want you to believe. I won't reveal those methods here because they are much better revealed through the context of Shermer's story telling.

Through his reasoning and evidence, Shermer explains why we can, do, and should hold such criminals, as mentioned above, accountable for their actions. By doing so, he restores peace to the story he is telling and offers a calmer, more understandable view of free will.

Is Shermer right about his stance on free will? I am not sure, but he makes a compelling case his side in this book and the rest of the book follows suit providing a great argument as to why morality in the world is arcing towards the side of good as science reveals more to us about the well being of others.

Shermer starts by telling us that moral progress is defined as "improvement in the survival and flourishing of sentient beings."

He argues that even in the world of ISIS and other horrific terrorist organizations around the globe, things are getting better.

He isn't wrong, the world, to a degree is getting less violent, however, much of his argument relies on the same flawed data that Steven Pinker and Jared Diamond rely on to show the world was at one time actually more violent. Both whose work mainstream anthropologists have challenged time and time again.

Yet, even with such data, the thesis of Shermer's work remains solid. Even though science has brought us the atomic bomb, it is also a tool that can teach us about well-being and offer us moral progress.

I found that Shermer did a wonderful job providing a lot of evidence, even when only anecdotal to show the power that the scientific method has in improving our reasoning over subjects such as women's rights and gay rights, even going as far as to discuss animal rights in the moral arc of history.

Had Shermer pushed too much academic science in place of anecdotal evidence, he may have run the risk of losing everyday readers and would be left with a 1,200-page textbook instead of the readily accessible book he is presenting here to the mass market.

The Moral Arc adds yet another solid argument for the science of morality and will make a great addition to the bookshelves of those with an interest in the topic.