Unni Turrettini's book The Mystery of the Lone Wolf Killer: Anders Behring Breivik and the Threat of Terror in Plain Sight (Pegasus Books, November16, 2015) impressed me with its extensive research and insights that she has on the motivations of that deadliest of killers, the lone wolf. As she states:

All children are born beautiful and untainted, including the lone wolves. Something happened to them along the way. By recognizing the warning signs and giving them the help they need before they become killers, we can prevent the next massacre and help them rise to greatness instead of letting them sink into the spiral of destruction.

On July 22, 2011, Ander Breivik murdered 77 innocent people and wounded hundreds of others by exploding a car bomb at a government building, then getting on a ferry and going to Utøya Island and slaughtering teens and young adults as they were attending a summer camp. His actions caused ripples of shock throughout the world. If such heinous deeds could happen in Norway, a land noted for its calm, civilized society, it could happen anywhere. 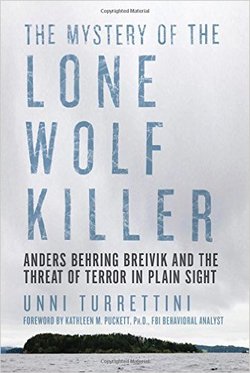 One of the most striking aspects of the book is that Turrettini delves into the Norwegian culture of Jante or Janteloven, which essentially stipulates that society comes before the individual, and that no one should try to think of him or herself as "special' or "better" or "smarter" than anyone else. This concept, while creating a harmonious and homogeneous society, does not allow for the individualism that is needed for some persons to thrive. Brievik was below the radar in his quest for fame or in his case infamy, and to promote his twisted ideology.

Turrettini's comparison of Breivik with other lone wolf killers like Tim McVeigh, Ted Kaczynksi, Eric Rudolph is both chilling and disturbing. She analyzes how Breivik, who was born not twenty minutes from her own birthplace in Norway, eluded all detection despite the warning signs that were evident in his behavior and his proclivities. Loner, video game enthusiast to the point of obsession, intelligent, and abandonment issues all played a part of his transformation from an isolated young man living in his mother's spare room, to an ideologue with an obsession against Muslims in Europe and Norway in particular. "Most people who are attracted to violent groups do not commit violent acts. They get together to hate together and that feeling of belonging meets their social needs. But this is not the case for a lone wolf..."

Turrettini spends a considerable amount of time analyzing Breivik's manifesto that defines his transformation into a lone wolf killer. She studies it for its obvious signs that this is not someone just feeling violent, but actually on his way to committing violent and deadly acts, in the name of some ideological hodgepodge of conflicting ideas. Unlike other mass murderers, such as Klebold and Harris in Littleton Colorado or a suicide bombing terrorist, Lone Wolf killers are interested not just in surviving but in glorifying in the limelight to reveal their message to the world.

Despite the heinous nature of his crime, Breivik manipulates the Norwegian penal system and obtains whatever he desires just with threats of lawsuits. His sentence is laughably short, and Turrettini turns her unflinching gaze at the large holes that exist in the Norwegian legal system that may eventually allow Brievik to be released. Her critique is precise and compelling.

Unni Turrettini is a writer, public speaker and former attorney, so her attention to detail is extensive. The book is very well researched, and logically built on all the facts. This makes reading somewhat slower and more methodical than the average skimming-a-page technique, since the detailed minutiae of mass murderers as well as lone wolves creates chilling comparisons and assessments and requires serious attention. Although detail driven, Turrettini's style is clear and readable and the analysis targeted and supported.

All told, The Mystery of the Lone Wolf Killer is compelling, frightening and worth reading. Her take is even handed, sometimes too much so, and she does lay the blame on Norwegian society for not recognizing that there are individuals within it not capable of thriving in a homogeneous society. She further indicates that while these individuals crave individual achievement or recognition for their actions, the problem is not limited to Norway. Lone Wolf killers are a global problem as well, as she makes her comparisons to the United States and other locales plagued by this terror in plain sight. Her use of examples of mass killings makes for grim reading but if we are to comprehend the motivations, and impetus that drives these lone wolves, it is necessary to analyze and understand how they've evolved into monsters.