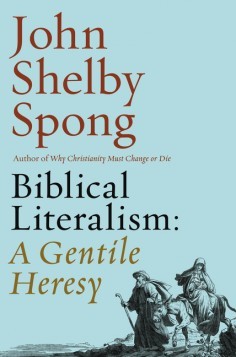 He's not done yet.

But retirement from his official role in the Episcopal Church has not meant retirement from study and reflection and public advocacy. Spong uses his personal website and blog to offer commentary and a glimpse of the ideas he is grappling with. A best-selling author, he continues to publish a string of well reviewed books that popularize cutting edge scholarship alongside his own insights. Spong is also a popular speaker, giving two talks in Illinois on Saturday, April 9 with more scheduled throughout the summer. (One talk is in Peoria and the other in Springfield.) Still, retirement does have its benefits, such as fewer death threats.

Spong believed his memoir (2001's Here I Stand) would be the last book he wrote. Yet the books keep coming. Case in point? Biblical Literalism: A Gentile Heresy. Booklist echoes many others when it says, "Delightedly publishing another book as he nears 85, Spong returns to a main theme of his career, the Jewishness of Christianity...vibrantly accessible."

Indeed, on one level Biblical Literalism is a loving look at the Gospel of Matthew. Spong emphasizes that of course it was written by Jewish writers for a Jewish audience and was first heard in Jewish worship. By placing the Gospel over the calendar of worship for Jews at the time it was written (an issue of some debate), Spong shows the work "clicking" into place. The eccentricities, the purpose of so many passages become crystal clear when seen from this perspective. It's an insight he readily acknowledges was pioneered by many others, including the scholar Michael Goulder. Yet for a layperson unfamiliar with trends in Biblical scholarship, it's a revelation. Indeed, first discovering this truth was a life-changing experience for him.

On a second level, Spong takes up the thread of another burning issue by emphasizing again and again the dangers of Biblical literalism. In his lifetime, Spong has seen so many of the key issues he championed triumph, from basic civil rights for people of color to equality for women to the growing acceptance of the queer community as welcome members of society and Christianity. Yet he is still driven to push forward on the many issues that remain, from economic justice to seeing the equality of women recognized everywhere to the fight against war. Above all, indeed central to those battles is the struggle for the soul of Christianity, a soul he sees as poisoned by a desire to claim absolute truth and a Biblical literalism that leads to a religion of punishment and control and guilt and shame, rather than a faith of love and compassion and joy.

Spong's journey is a remarkable one. He began with a childhood raised in fundamentalism in the heart of the Bible Belt and grew into a questioning young man. Later, Spong became a major figure in the Episcopal Church and society at large, challenged as little better than a heretic by some and receiving death threats from others. He's often portrayed as advocating ideas that would destroy Christianity. To Spong he's striving to save it, just as rejecting fundamentalism saved his own faith.

Spong thinks perhaps Biblical Literalism might be his last book. His wife Christine would happily agree. After many years of marriage, he still refers to her sweetly as "my bride." Central to the work he accomplishes, she jokes that even if he's up for another book, she may not be. (On the other hand, one suspects she may have also said that four or five books ago.) In any case, Spong will be heard, whether giving talks or weighing in online, Spong found his voice speaking for those who were silenced and he won't stop now.

Thanks for reading. Michael Giltz is the creator of BookFilter, a book lover's best friend.

Before you head to your favorite bookstore, library or website, head to BookFilter. You'll discover great books ready to read, borrow or buy right away. We feature all the new releases every week in every category, from fiction and mystery and romance to cookbooks and history and sports and more.

At BookFilter, we share all the books we're excited to read and give personal reviews of our favorites. No computerized recommendations, no soulless algorithms -- BookFilter features only passionate real book lovers combined with in-depth information you can't find easily anywhere else. It's like browsing the aisles of your favorite bookstore with our experts pointing out the best of the bunch every step of the way.

BookFilter: your source for what's new and what's good.