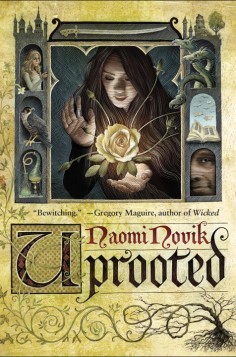 Naomi Novik is one of the most successful fantasy authors of the past decade. She splashed onto the scene in 2006 with three books published in three months on the venerable Del Rey imprint, making Novik an immediate critical and commercial sensation. The Temeraire series combines the Napoleonic Era with dragons in a manner both witty and insightful. (When your beast of burden is a talking, fire-breathing dragon, questions of self-determination and slavery become a lot more interesting.)

Even before the first book was published, it was optioned by director Peter Jackson (more on that in a minute). But other stories, other ideas have pushed their way in as Novik builds to the ninth and final volume of the Temeraire tales, due out in 2016. One idea in particular wouldn't go away and the result is Uprooted, a stand-alone fantasy out now to considerable critical acclaim. Her peers in particular have praised it, with everyone from Ursula K. Le Guin to Lev Grossman to Tamora Pierce (the author Novik read in the school library as a child, rather than going out to play during recess) chiming in.

Novik sat down with BookFilter to discuss her new book, her childhood, how her parents met and separated and met again across the sea, a lost novel and much more. Head to BookFilter for the complete interview. Highlights are below.

Based on the Polish and Russian fairy tales her mother read to Novik as a child growing up in Staten Island, Uprooted begins in classic fashion with a corker of an opening line: "Our Dragon doesn't eat the girls he takes, no matter what stories they tell outside our valley." Novik has you immediately and never falters. The novel begins with a ritual: the once-a-decade ceremony when the local wizard (nicknamed the "Dragon") chooses a young maid to take away to his tower, where she serves him in ways the locals can't imagine but spend an awful lot of time trying.

Everyone simply knows the beautiful and winning Kasia will be chosen and yet it's our narrator Agnieszka that the Dragon almost reluctantly takes. From the fate of Agnieszka to the fate of her valley to the fate of the kingdom and indeed the world, the scope of this story slowly but inexorably expands. So does the magic, whether the highly detailed, scientific magic of the Dragon or the more creative, "instinctive" magic that Agnieszka soon proves adept at.

The medieval world Novik creates is as rooted in reality as her Napoleonic one. But unlike most fantasy, what you remember best is not the world but the vivid and complex characters. In what is ultimately a rather remarkable novel, there are no genuine villains. Oh there is danger and evil aplenty (as symbolized by the malignant Wood that encroaches on Agnieszka's valley); armies clash, people struggle for power and so on. But time and again Novik reveals characters driven not by a black heart but by sincere if sometimes misguided impulses. Indeed, nothing is scarier than someone doing great evil for what they consider a higher purpose. In shortUprooted is the best and boldest novel she's written. So far.

Novik is one-half of a publishing industry powerhouse. She's an acclaimed, best-selling author and a champion of online fan fiction (where Novik got her start) via the Organization For Transformative Works. Her husband Charles Ardai is an Edgar Award-winning author in his own right as well as the founder of the pulp fiction imprint Hard Case Crime. Here Novik tells how they met and her fortuitous path to getting an agent.

NAOMI NOVIK ON BREAKING INTO THE FEDERAL RESERVE

Novik grew up in the 1970s surrounded by numbers and science. Her parents were steeped in them while working on computers after emigrating to the US from Eastern Europe. Here Novik describes making like Matthew Broderick and playing early online games by remotely accessing the Federal Reserve computers.

NAOMI NOVIK ON NOT TALKING ABOUT THE MOVIE VERSION OF TEMERAIRE

The Temeraire series was optioned by Peter Jackson about a decade ago. Novik remains a huge fan of the director, but after years of enthusing about the potential for a movie or TV series or something, Novik suddenly clams up politely when the issue is broached yet again. Given the length of time that has passed, outsiders can only surmise that the option has lapsed or someone else is circling the project or something is about to be announced...or that a project that would be ridiculously expensive and difficult to mount may simply be on the backburner for years to come. You decide.

This much is clear: Novik is not a one-trick pony. Her Temeraire series was a clever idea: The Napoleonic Era! And dragons! Of course! But it is the execution that makes it an ongoing pleasure. (The final book will be out in 2016.) And with Uprooted just released to acclaim and numerous other stories bursting to get out (led by an idea that springs from The Secret Garden), we can safely say Novik won't be one of those authors who builds one great world and then gets trapped in it. Temeraire is just the beginning. Head to BookFilter for the complete, in-depth interview.

Thanks for reading. Michael Giltz is the founder and CEO of BookFilter, a book lover's best friend. Head to BookFilter if you want to find more great picks in every category. You'll discover smart picks by our crackerjack staff, not crowd-sourced reviews saying -- yet again -- hey, you should read "The Girl On A Train!" (I mean, you should, but you knew that already, didn't you?) You'll know what just came out in stores, get great ideas for what to read next or find a smart and affordable gift in every category. If you're a super-fan of cookbooks or history or mystery or you name it, come to BookFilter and you can browse through lists of every release in every category and do your own filtering!