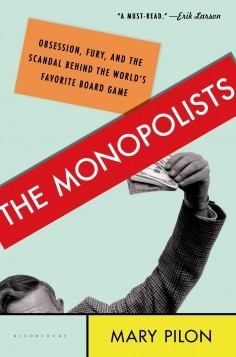 When journalist Mary Pilon stumbled across little known facts about the board game Monopoly she got intrigued. Five years later, Pilon has produced her first book, The Monopolists: Obsession, Fury And The Scandal Behind The World's Favorite Board Game. It tells the secret history of one of the most successful commercial board games of all time, a history that includes feminist rebels, Quakers in Atlantic City, college students who struck it big in the dot-com boom and why the street Marven Gardens is misspelled as "Marvin" on every board of Monopoly today, making it the most repeated spelling error imaginable.

You can watch the full interview with Pilon (a contributor to The New York Times, The Wall Street Journal and others) at BookFilter.com. You'll also find other great recommendations of books in every category. Below are some highlights.

PILON ON WHICH MONOPOLY BOARD SPACES TO HEAD TO IF YOU WANT TO HEAR GREAT JAZZ, PICK UP A MALE PROSTITUTE OR DROP OFF YOUR DOMESTIC AFTER A HARD DAY'S WORK

In the early days of Monopoly around the turn of the last century, the game was a favorite of left-wing intellectuals who loved its anti "fat cat" stance. The game spread across the country by word of mouth from utopian communities to college dorms. Often, the boards would be personalized: whenever someone hand-crafted their own copy of the game, they would insert local street names and landmarks. When Monopoly made its way to the Quaker community in Atlantic City, they did the same. It's that version of the game which was purloined by Charles Darrow who sold it to Parker Brothers and profited mightily. Pilon reveals the real-life Atlantic City thoroughfares that appear on the board and what they reflect about the city at that time.

PILON ON THE FEMINIST REBEL WHO REALLY CREATED MONOPOLY

For generations, everyone who bought a copy of Monopoly saw the same origin story: it was invented by Charles Darrow during the Great Depression; the success of the game made his fortune and rescued Parker Brothers from bankruptcy. Not quite. It certainly made Darrow rich and saved Parker Brothers. But Darrow didn't invent the game; he copied it wholesale, added a few tweaks (as so many had before) and reaped the rewards. Pilon talks about the real genius behind Monopoly: Lizzie Magie, a bold and unconventional woman who proselytized for the land tax (a favorite weapon for those who decried the gilded age they lived in), wrote stories, acted on the stage, patented a device to improve the typewriter, staged a hugely successful stunt to bring attention to the lack of basic rights for women...and invented a board game that became the phenomenon we know as Monopoly. Here Pilon tells some of Magie's story.

The true origins of Monopoly might have been lost in the mists of time. But Berkeley professor Ralph Anspach changed that when he invented his own game called Anti-Monopoly. He wanted to create a game that denounced illegal trusts, not celebrate them, little realizing this was the original intention of the game. Needless to say, Monopoly was not amused by the success of Anti-Monopoly and they sued. Anspach fought them all the way to the Supreme Court, in the process uncovering the secret history of one of the most popular games of all time. Pilon describes the long battle Anspach fought, the price he paid and why he never gave up.

Monopoly is of course hugely successful; it's also practically guaranteed to start a fight with family or friends whenever you play it. (Hey, you rolled before I could see they landed on my property!) Pilon talks about the psychology behind board games, why they're akin to sports and probably a good idea for something to do on first dates.

You can discover more great books like The Monopolists every week at BookFilter. We're the only site in the world that shows you every single release every week in every category. So if you're a fan of say Mystery or Romance or History or Science Fiction/Fantasy, you can see our top choices and then click on All Releases and browse every single book that comes out every week.

If you prefer recommendations from a trusted source, BookFilter offers our passionate, personal picks for the books we're excited to read the most (or have already read and loved). It's like a fall book preview or summer beach guide, but every week in every category.

Thanks for reading. Michael Giltz is the founder and CEO of BookFilter, a book lover's best friend. It's a website that lets you browse for books online the way you do in a physical bookstore, provides comprehensive info on new releases every week in every category and offers passionate personal recommendations every step of the way. It's like a fall book preview or holiday gift guide -- but every week in every category. He's also the co-host of Showbiz Sandbox, a weekly pop-culture podcast that reveals the industry take on entertainment news of the day and features top journalists and opinion makers as guests. It's available for free on iTunes. Visit Michael Giltz at his website and his daily blog.