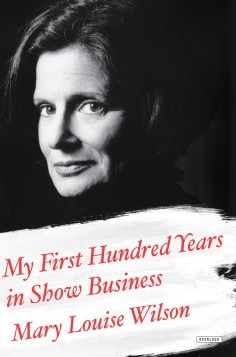 MY FIRST HUNDRED YEARS IN SHOW BUSINESS: A MEMOIR
By Mary Louise Wilson
$28.95; The Overlook Press

Here it is, the dishiest, funniest, chattiest, and most soul-baring theater book of the year. Tony winner Mary Louise Wilson -- forever dubbed "the best thing in it" in review after review -- captures her life and career in this delightful memoir. Pick it up and its slim nature (less than 200 pages) might disappoint. But then you start to read it and realize, "Oh, she only put in the good stuff!"

Wilson's career runs the gamut from performing in a legendary cabaret revue in the 1960s to hits and flops on Broadway to toiling away at anything and everything, with commercials like Folger's Instant Coffee offering a financial lifeline. She's worked in TV and movies but made her mark most indelibly in the theater.

Wilson tells her story in a charmingly scattershot style, but the through line is the eight year journey of turning a memoir of Vogue editor Diana Vreeland into the career-peak triumph Full Gallop, the show that made Wilson a star in her 60s. Otherwise, she'll jump from her crazy family to sharing horror stories about auditions to life on the set of the hit sitcom One Day At A Time enduring the glassy stare of Bonnie Franklin to winning the Tony for the acclaimed musical Grey Gardens.

It's impressionistic, jumps all around, has no discernible structure and pretty much charms the hell out of you. Wilson is happy to be pointedly sharp on contemporaries but she's hardest on herself, revealing her fear of success, her poor self-image and the hard-earned peace that has finally come to her.

Wilson is enjoying a run of success few actors ever achieve and -- despite being a glass-half-empty kind of gal -- she's actually able to enjoy it after a lifetime of rejecting the spotlight. She triumphed in Grey Gardens, she enjoyed a key role in the acclaimed drama 4000 Miles and now she's frolicking on stage in the hit revival of On The Twentieth Century, putting her own stamp on the sneakily rebellious Miss Primrose and one of the great visual gags in musical theater history.

Despite a heavy schedule of performances, Mary Louise Wilson was very generous with her time. She talked about her struggle in writing the book. Friends and colleagues read earlier drafts, loved it, but wondered, "Shouldn't there be more of you in it?" Wilson wasn't ready to be the star...not even in her own autobiography! Discovering the strength to do that is one of the many undercurrents that make My First Hundred Years In Show Business more than just a witty and revealing look behind the scenes of a life in the theater.

Here's Wilson on her late brother. The vivid early sections of My First Hundred Years In Show Business capture her deliciously dysfunctional childhood in New Orleans, with an alcoholic mother, a sister who would later send Wilson clippings about actresses who had committed suicide or been institutionalized (acting was rather an embarrassing pursuit, wasn't it?) and a brother Wilson later realized was gay. Her brother embraced the desperate snobbery of Wilson's mother and yearned for the respectability that would never come: on his death bed, he was still trying to get onto the social register. With her book released just as the Supreme Court rules in favor of equal marriage rights for gays, Wilson wishes he'd lived to see this day.

Finally, here is Wilson on having the support of feared theater critic John Simon and the satisfaction of writing her own, final review.

See the full interview on the front page of BookFilter.

Thanks for reading. Michael Giltz is the founder and CEO of BookFilter, a book lover's best friend. Head to BookFilter if you want to find more great picks in every category. You'll discover smart picks by our crackerjack staff, not crowd-sourced reviews saying -- yet again -- hey, you should read "The Girl On A Train!" (I mean, you should, but you knew that already, didn't you?) You'll know the titles that just came out in stores, get great ideas for what to read next or find a smart and affordable gift in every category. If you're a super-fan of cookbooks or history or mystery or you name it, come to BookFilter and you can browse through lists of every release in every category every week and do your own filtering!