Book-It Theatre's latest production, an adaptation of Kurt Vonnegut's Slaughterhouse-Five adapted and written by Josh Aaseng is a masterpiece to behold. The show keeps the audience involved from the opening moment when Vonnegut (portrayed brilliantly by Jim Gall) addresses his spectators, telling them how the play / book will end with a final scene that takes place after the historic fire bombing of Dresden that Vonnegut himself survived as a POW.

Slaughterhouse-Five is quite intricate and can be viewed on several levels. At its most basic, it is entertaining, funny and thought provoking. On another level it is an anti-war diatribe, which clearly reflects Vonnegut's perspective. Looking a bit deeper, Slaughterhouse-Five presents a view of reality as simply a series of moments that are all eternal and unique unto themselves.

The play's hero Billy Pilgrim is actually portrayed marvelously and seamlessly by three actors Robert Bergin as the young Billy, Erik Gratton as the middle-aged Billy and Todd Jefferson Moore as the elderly Billy. This is very necessary as Slaughterhouse-Five's primary premise is that Billy Pilgrim has become unstuck in time. Thus, the scenes are not necessarily in chronological order, and at times more than one Billy is on stage. 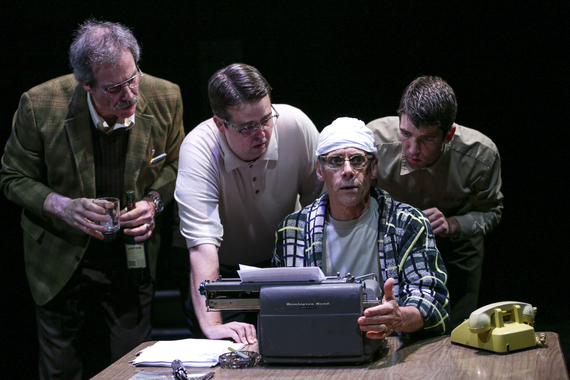 This scenario could become very complicated and difficult to follow, but it is not. The show's plot intricately weaves each thread together while taking the audience on a strange and intriguing narrative ride filled with unexpected and interesting twists and turns.

All in all, this is a captivating, wild performance that should not be missed. You may have read Slaughterhouse-Five, so you think you know what you will see. Go have the experience of seeing it live, and allow yourself to be surprised, captivated and delighted because Book-It's production is almost as rich and inviting as what I recall of the story from reading it years ago.

And as they continue to remind us throughout the show, "So it goes."

Slaughterhouse-Five plays at the Seattle's Center Theatre through July 3.