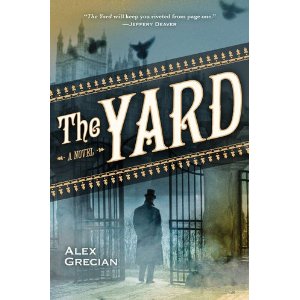 Jack The Ripper has disappeared into the mist of Victorian London. But Scotland Yard -- shamed and embarrassed over its failure to catch the taunting madman -- must carry on. In this debut novel by comic book author Alex Grecian (Proof), the Yard is an absorbing launch pad for a new series built around the detectives who are finding their way in the new business of criminology.

Fingerprinting, saving evidence, comparing notes from different crimes to see if there's a pattern, even something as simple as working in pairs are all novel, untested ideas tried out for the first time.

Our heroes include the new kid on the staff, Walter Day; a passionate journeyman cop named Hammersmith and the doctor who has taken it upon himself to be a de facto medical examiner. At the top is Colonel Sir Edward Bradford, the one-armed man leading his team with grim humor and determined insight into both his men and the dangerous new strain of violent, unhinged murderers spawned by the festering atmosphere of the most crowded city in the world.

They're all focused on the brutal killing of one of their own -- a detective found dismembered and crammed into a piece of luggage at a train station. But other crimes soon weave their way into the narrative, from a little boy abducted by an unhinged lunatic to a pair of slightly mad prostitutes getting their revenge on the police who couldn't capture Jack The Ripper. Grecian's world is also populated by the colorful denizens of the streets from a lumbering gentle giant who dances to amuse to Blackleg, a burglar who can't look away when he stumbles across an innocent boy left stuffed in a chimney to die.

Caleb Carr's The Alienist is an obvious comparison, thanks to The Yard's attention to detail and mix of historical facts and vivid fictional creations. It's great fun, despite a dramatically over-stuffed finale. Grecian's debut is the promising start of a new series and should be one of the most acclaimed and popular mysteries of the year.