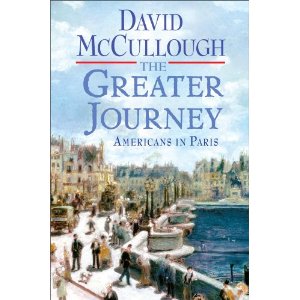 THE GREATER JOURNEY: AMERICANS IN PARIS BY DAVID MCCULLOUGH *** out of ****
$37.50 hardcover; SIMON & SCHUSTER

In 1831, Samuel Morse returned to Paris to begin what he believed would be the crowning achievement of his life. Not the telegraph -- that would come later. Morse went straight to the Louvre to begin a painting. One decade earlier he had produced House Of Representatives, a grand scale work that depicted the seat of American democracy and featured some 80 people of note within it. It was very typical of a certain type of "ambitious" art that would eventually fall out of favor.

This new work was in the same vein but even bolder. At the very least, it was bigger, measuring 6 feet by 9 feet -- if size meant anything at all to an American, why wouldn't it? The subject was the Louvre itself: Morse would capture a great hall of the famed museum and include 38 of his favorites works, including Da Vinci's Mona Lisa. Morse's great friend, the writer James Fennimore Cooper, could barely keep himself away and returned day after day to chart the painter's progress.

This style of painting -- one piece containing many smaller but bravura works or portraits within it -- is exactly the model for author and historian David McCullough's new book The Greater Journey: Americans In Paris. McCullough looks at the many artists, scientists, people of medicine and thinkers who made the voyage back across the Atlantic to find inspiration and knowledge in the City of Lights from roughly 1830 to the end of the century.

The Paris of the 1920s -- when Hemingway and F. Scott Fitzgerald romanticized the life of the expat -- seems almost a backwater when compared to the flood of people that came there during these six decades.

The stories keep coming, almost to their detriment. After a while, the tale of an American coming to Paris, falling in love with the city, finding themselves artistically or philosophically and moving on to great success does begin to blur a bit. In fact, The Great Journey does not have the compelling through-line of most of McCullough's major works, like The Path Between The Seas (about the building of the Panama Canal) or his biographies (Truman, John Adams).

But the spine that keeps you moving forward is McCullough's pocket history of Paris during one of its most remarkable and bloody eras. He sketches the Franco-Prussian war (in which McCullough shines with his depiction of American Ambassador Elihu Washburne and the man's steady and sober presence that saved many lives) to the horrors of the Commune.

McCullough might have focused just on "The Medicals," as he calls the many Americans who traveled to Paris for a proper education in medicine, returning the favor with their assistance during some of the bloodletting that century would feature. Their tales are some of the freshest and most unusual to be found here. But the book is bursting with such fascinating side-paths, and it would be churlish to call it over-stuffed with diversions. And yet, the stories do begin to lose their impact with so many of them being so similar in their broad outlines.

Like Morse's The Gallery Of The Louvre, McCullough fills his new book with deft mini-portraits of numerous figures and gives them the dramatic history of Paris during the 1800s as a canvas. The Greater Journey may not reach the greatness of his best, more focused works. But it will satisfy his fans and send the curious off into a dozen directions to learn more about these people. And, if they're lucky, on a pilgrimage to Paris.

NOTE: Michael Giltz was provided with a free copy of this book in galley and final form. He receives far more books than he can cover and does not guarantee to review or write about any particular one.