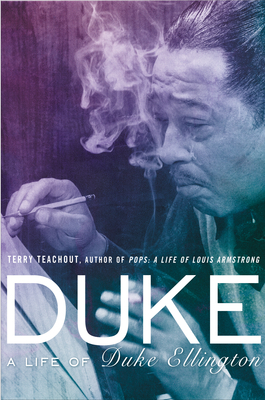 DUKE: A LIFE OF DUKE ELLINGTON *** out of ****
By Terry Teachout
$30 hardcover
Gotham Books

Often, biographies of artists get me a little antsy: Shouldn't I just be watching their movies, reading their books, studying their art or listening to their music? Isn't that artistic biography they themselves created -- the reason we're talking about them today -- the important stuff? But the best books capture their life and creative process, showing you how they accomplished what they did, why they accomplished it, and shed new light on the work in the process. So then you scurry back to the art, but with a newfound appreciation for their craft and a new understanding of why it's so revolutionary.

Duke: A Life Of Duke Ellington certainly accomplishes that. Teachout captures the breadth of his life from spoiled mama's boy to spoiled genius who arranged everything and everyone in service to his craft. That's the right of artists and Ellington was unquestionably an artist of the first order.

With verve and insight, Teachout details Ellington's lucky breaks, from that stint at the Cotton Club to musicians' strikes that paradoxically helped him out. Naturally Teachout is sharp on the music in all its dizzying forms, from classic songs like "Take the 'A' Train" to extended works that fall in and out of favor but have proven enduring.

But Teachout is just as good at highlighting the cultural context: Movies played a vital role in establishing Ellington as an artist in the eyes of the general public, while elevating the image of the black man. It was rare indeed for even the best artists not to be demeaned off-handedly by the media they couldn't control. But Ellington was always elegant, classy, sophisticated and "important" and Teachout is at his best in showing how and why that happened.

Ellington made a virtue out of necessity: his orchestra would have trouble booking hotels in the south so they traveled by private train cars. This saved money in some ways, allowed Ellington his privacy and the luxurious comfort he expected and just as importantly added to his glamour and prestige. So Jim Crow made him seem classier and akin to the president and other major figures, while the yokels in small towns came out to stare at the train stations.

One detail in particular stuck with me about the racism he faced when forging his path towards world fame and acceptance as a composer of the first rank. Ellington had a caricature done by the legendary Al Hirschfeld. That's nice, I thought, a sign of having made it, since Hirschfeld did all of the big Broadway stars and other celebs. 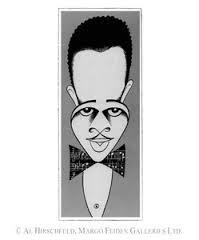 But it's the reason Ellington commissioned the elegant looking sketch that struck me. It was done by his savvy manager Irving Mills for promotional purposes. Ellington was world famous by the 1930s but as a matter of course white newspapers simply refused to run pictures of black people. They would write about his tour, do profiles of him and rave about his shows...but they wouldn't run his picture.

Yes, Ellington had a vivid private life with wives and mistresses angling for attention from the man whose first and last love was himself and his music. But the real excitement here is the creative process. Ellington famously wrote "for" his world class musicians, crafting and arranging music specifically for them. Figures like the great Johnny Hodges come vividly to life here. Ellington also gleaned their riffs for material that would become the basis for some of his most famous songs. Rather than parsing each song for a debate over who deserves how much credit for this or that gem, Teachout constantly uses songs to illuminate how this riff evolved into that tune. Each artist in his group gets their due but the inevitable argument arises that the musicians who often felt cheated were rarely if ever able to forge out on their own and create music of equivalent greatness as composers. Whatever ingredients went into them, the alchemy was often Ellington's and Ellington's alone.

Needless to say, his collaboration with the great Billy Strayhorn is a different matter, with that gay composer/arranger trading the spotlight in exchange for freedom, though he often chafed at notn getting his due or feeling taken for granted.

Teachout also debunks Ellington's many post-facto claims for his songs, how this one was about such-and-such and written in a particular circumstance when in fact it had been inspired by some riff of one of his musicians and titled something entirely different before getting "rebranded." Ellington was also invariably promoting operas and other lengthy work he was just about to finish with the next day.

Teachout argues that if critics hadn't been so dismissive of Ellington's extended works early on that he might have been more encouraged to pursue symphonic pieces with even more vigor and confidence. Still, he turned out quite a few and Teachout argues convincingly for some of them, especially the religious-themed works. But it's the Blanton-Webster years and the dizzying string of classics that came before, during and after the band's artistic heyday that turn your head: "Cotton Tail," "Chelsea Bridge," "Sophisticated Lady," "Satin Doll," "Do Nothin' Till You Hear From Me," "Solitude," "East St. Louis Toodle-O," "Mood Indigo," "It Don't Mean A Thing (If It Ain't Got That Swing" -- that just scratches the surface and you're already humming one of those gems, aren't you? You'll appreciate them more, not to mention seeking out less familiar fare with new excitement. If you're really lucky, you can play key tracks as they come up in the book. It extends the reading time, but in the most enjoyable way possible. Ellington and Teachout would surely approve.

Most titles listed here will be available in multiple formats. Do check individual titles for availability in all their various guises and price points.

Thanks for reading. Michael Giltz is the founder and CEO of BookFilter, a book lover's best friend. It's a website that lets you browse for books online the way you do in a physical bookstore, provides comprehensive info on new releases every week in every category and offers passionate personal recommendations every step of the way. It's like a fall book preview or holiday gift guide -- but every week in every category. He's also the cohost of Showbiz Sandbox, a weekly pop culture podcast that reveals the industry take on entertainment news of the day and features top journalists and opinion makers as guests. It's available for free on iTunes. Visit Michael Giltz at his website and his daily blog.

Note: Michael Giltz is provided with free copies of galleys, e-galleys and/or final copies of books to consider for review. Generally, he does not guarantee to review and he receives far more titles than he can cover.