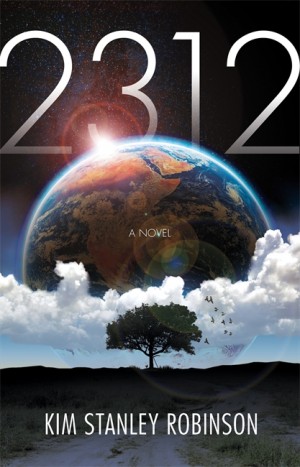 Science fiction at its best can accomplish one of two things. Either an author is adept at extrapolating current scientific thought and expands our ideas of the possible (like Arthur C. Clarke's popularization of putting satellites into geosynchronous orbit) or an author uses a futuristic setting to shine a spotlight on the present.

Kim Stanley Robinson does both. His new book 2312 is bursting with so many ideas and vivid characters that readers will be almost upset to hear it's a stand-alone. How could anyone create such a vivid, believable, mind-bursting future and not want to explore it further?

The story takes place 300 years in the future. Humanity has expanded beyond the earth to colonize various planets and moons and asteroids and any other heavenly object you can name. Tension between the over-crowded dysfunctional earth and the people on the outer worlds is always high despite their mutual dependency. Limited resources, ever-lengthening lifespans (200+ years and counting), and good old lust for power are bringing the crisis to a head.

Terrorist acts soon sabotage the safety of everyone but who is committing them? Is it the work of multinational corporations still struggling to hold onto power? Resentful people trapped on a dying planet? Power brokers desperate to swing popular support to their own particular vision for the future? Or could it be the work of qubes, those quantum-based computers of a sort that serve as artificial intelligence and which apparently are starting to act "strangely" and may have achieved some sort of consciousness and -- along with it -- a desire to be free?

This grand scale narrative is immediately anchored in the story of Swan Er Hong. She's the granddaughter of Alex, a very powerful player in interstellar politics who apparently feared some qube revolt and insisted on doing most of her work face to face. When Alex dies at the beginning of the book, Swan finds herself drawn into multiple conspiracies and a need to revenge the attack on her home city Terminator, located on Mercury. Complicating matters? The landscape artist Swan may be falling in love; indeed, her own implanted qube is aware of it before Swan.

Okay, that's the very broad outline of this tale. Robinson's narrative fun reminds me of Melville's Moby Dick, thanks to playful interruptions of the story with lists and internal monologues and extracts, such as the intro to a manual on how to terra-form your own asteroid. ("As your assembly hollows the interior, be aware that ejection of the excavated material (best aimed toward a Lagrange salvage point, to collect the salvage fee) will represent your best chance to reposition your terrarium, if you want it in a different orbit.")

I haven't even touched on the polymorphous, polygender world of 2312, where referring to someone's gender is akin to using the informal "tu" in Spanish and not something you'd want to even hazard a guess at in many circumstances. Humans have modified themselves into "talls" and "smalls" for various reasons. (It turns out smaller body ratios invariably live longer and work better in low gravity environments.) And sexual organs of all types can be added on to your body as you please.

Even that doesn't capture the humor, such as the way Robinson brilliantly maps out a future history of economic systems in just a few short pages (all reflecting the various influences of solar colonies and the type of trading in raw materials and finished products they'd engender) with the kicker being a one-line reference to the almost complete disappearance of capitalism as one of the main accomplishment of the colonization of Mars. (Capitalism remains a "sport" for some, a game to be played on the margins of the real economy. Being good at this rough and tumble endeavor is a hobby or almost an art form. Almost.)

In short, Robinson's story is gripping, funny, and rich with vivid characters -- like the "small" Inspector Jean Genette and the imperturbable, frog-like Warham. It describes a possible future in such vivid and exciting ways you can't wait for it to arrive.

But Robinson doesn't just spell out future possibilities; he inhabits them. One section lays out the way to hollow out an asteroid and create a terrarium to support life -- Swan in fact spent much of her early artistic career creating these various worlds and coming up with themes and interesting combinations of Earth environments to make each one she worked on unique and fascinating. We learn how these interiors are circular and therefore you can be standing on the "ground" and look up: "above" the clouds you can see a lake, located in the sky from your perspective but simply the opposite side of the asteroid. Wonderful, memorable stuff. But it's not until a character is in one such space and remarks that he feels like he's inside a map that has been rolled up and put into a tube that this idea truly comes to life in a simple but effective image. Robinson offers such insight again and again.

The story ends on a perfect note that's emotionally satisfying and implies a remarkable new development in what constitutes life in one brief, amusing exchange. Then Robinson indulges in one more extract and a rose-tinted epilogue that is quite unnecessary. It's a minor complaint about a novel that is so sure-footed throughout.

2312 is clearly one of the best books of the year but I'm not sure I can recommend it to people who aren't already steeped in sci-fi. I fear they might be lost by the ideas and assumptions that sci-fi fans now take for granted as future possibilities. Robinson's The Years of Rice and Salt is still my favorite book to introduce people to his talent; it goes far into the future but begins in the past and includes ideas of reincarnation that make that millennial spanning work easier for newbies to grasp. Then I would send people to his landmark trilogy -- Red Mars, Green Mars, Blue Mars -- a wonderful tale about colonizing and terraforming Mars that is as good as hard science fiction gets; being set in the near future makes it easier for readers not accustomed to sci-fi to follow the possibilities as they slowly arise.

In contrast, 2312 throws you into the deep end. For those ready to take the plunge, it's an exhilarating experience.