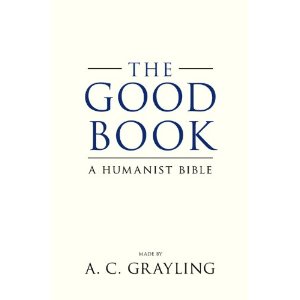 If imitation is the sincerest form of flattery, then British philosopher A.C. Grayling has just paid the Bible the ultimate compliment. After centuries of being the best-selling work of all time, the Bible will now face a direct competitor: The Good Book: A Humanist Bible by Grayling ($35; Walker & Company) is a distillation of wisdom and insight from some of the world's greatest thinkers explicitly modeled on the approach of the Bible published on the 400th anniversary of the King James Version.

It's cheeky, audacious, almost scandalous in a way. The Bible as we know it today comes in hundreds of different versions (thousands if you count various translations of sections like The Book Of Job and Psalms, which are very popular on their own as literature). It draws upon millennia of oral tradition, written texts, parables, sayings, prayers, psalms, histories and biography, adjudicated at various times by early Catholic Church leaders and other Christian faiths, controversially translated into English (a heresy punishable by death at one point) and then gloriously translated into English for the King James Version in 1611 after some seven years of work. That version was completed by dozens of scholars, surely making it the greatest work of literature ever produced by committee. Some faiths teach that a particular version of the Bible is the literal word of God, but whatever your faith (or lack of it), the Bible in its many forms contains words that can and do inspire and comfort.

Grayling, an atheist, said, hey, that's a clever idea. Why not create a new Bible to instruct and inspire that draws upon many other philosophical sources? You can of course be a humanist and a Christian, but it's tempting to call this "a Bible for the rest of us." He's modeled The Good Book on the Bible, with various sections like Genesis, Wisdom, Parables and so on. The text comes from thousands of sources written by hundreds of the world's greatest thinkers: Aristotle, Bacon, Chaucer, Confucius, Darwin, Euripides, Goethe, Hafiz, Jefferson, Laozi, Locke, Montaigne, Ovid, Rimbaud, Rumi, Spinoza, Swift, Voltaire and Walpole are among the many greats he draws upon. Here's a brief chat unrelated to this book in which Grayling talks about his life and philosophy in general.

Even the layout is similar: short chapters, with two columns on each page and lines written in verse but with an eye to poetry. You could of course read it cover to cover, but it's probably best approached by dipping in here and there, as I've done. (I haven't read the entire work yet.) If you're grieving, you might turn to Lamentations or Consolations, which ends with "This is the final consolation: that we will sleep at evening, and be free for ever." (Okay, not so consoling at first blush.)

Grayling doesn't just quote these thinkers; this is not a commonplace book where he lists a string of famous quotations. As you can gather from the brief passages I've quoted, Grayling has edited and shaped and woven together ideas and phrases and insights into one voice, delivered in a slightly archaic, formal style. Histories and Acts are two of the longest sections, often drawing on ancient stories from Greece and Rome and the like. Proverbs is easy to plumb. You'd never read this useful saying in the KJV: "A maid that laughs is half taken." But anyone can benefit from remembering "Whispered advice is not worth a pea" or "A true man hates no one."

Grayling does himself no favors with his foreword, here called an Epistle, which is written in such a grand, high-flown style and with such immodest ambition ("its aspiration and aim the good for humanity and the good of the world") that a casual reader might even call it a sin of pride. (Ha!) His Genesis is also a bit stiff. Dive into the middle of the book and you'll probably be drawn in. Start at the beginning and you might feel blocked, just like people who decide they're going to read the Bible and are suddenly deluged with wearisome "begats." And I do wish he'd offered at least a select bibliography of the works he has culled his text from, rather than just a list of names. Footnotes would have been distracting (and not in keeping with the authoritative tone it sought) but still. Perhaps Grayling or someone else will do the detailing of exactly what came from where online.

It will be fascinating to see if The Good Book catches on. Maybe agnostics and atheists will embrace it; maybe Christians will embrace it too as a valuable collection of insights. It might begin as a curiosity and then flourish or remain a cult favorite or just a curiosity. I suppose some might be offended by The Good Book but they needn't be. You don't have to be a nonbeliever to find solace and wisdom in the distilled ideas presented here. It's a testament to the enduring power of the Bible that Grayling sought to draw upon its very form and structure.

Even if you accept any of the four versions of the Ten Commandments that Moses offered up as law, is there harm in asking, as Grayling does in the final section The Good, "Shall we ask, by what commandments shall we live? Or might we better ask, each of ourselves: What kind of person should I be? The first question assumes that there is one right answer. The second assumes that there are many right answers." And yes, Grayling does come up with his own Ten Commandments, not that he would call them such. Would any person of faith object to them?

"Love well, seek the good in all things, harm no others, think for yourself, take responsibility, respect nature, do your utmost, be informed, be kind, be courageous: at least, sincerely try."