Anyone can submit a UFO sighting to the Mutual UFO Network. Even if you claim to be telepathically communicating with what one photographic expert calls "a balloon," this organization will take you seriously.

On Friday, an unnamed California couple photographed and videotaped a boomerang-shaped UFO that appeared high above their Burbank home.

"It was communicated to me, telepathically, that an orb had been released," one of the witnesses said, according to the report. "It wasn't until we reviewed our photos later that we actually saw the orb in a photo."

"I examined the video, and this appears to me to be a balloon, floating on the wind and that has collapsed in half," Dantonio told The Huffington Post in an email.

"Viewing the video illustrates that it is flying at a very believable drift speed for upper level air currents. The video is not useful for anything else other than determining relative wind speed and drift speed," said Dantonio, who also creates special model prototypes for government contractors.

The husband was on the rooftop of their house, facing mountains north of Burbank when he first spotted the object.

"I saw this white object in the sky. It was very apparent. At first I thought maybe an airplane, but it didn't appear to be moving, so I called my wife. We grabbed our cameras and began to take video and photos of the object," the witness wrote in his report to MUFON.

The witness said he "expected to see an airliner in the pictures," but what they got, instead, was something that was definitely shaped like a boomerang.

After the couple watched the object reportedly hover for a few minutes, it moved away over nearby mountains.

One picture of the boomerang UFO appears to include a smaller "orb" -- something that might not have been noticed right away. But the eyewitness seemed to expect this, and it could be argued that this is where the story unravels a bit.

The eyewitness also claims to have "a connection with them and see craft frequently."

MUFON hasn't yet investigated or made any public statements about this case. Click here to see the video of the UFO that was also submitted with the photos.

"If you look at each of the still images, you can see that the shape of the delta changes, particularly in the last photo, where the angle has opened up much more than in previous photos," said Dantonio, who added that he thinks the airborne object was rotating around in the wind.

"There is no 'directional vector' to the object as an aircraft might display. When long, low pressure balloons bend under gentle forces, they tend to bend in such a way that the forces are evened out, which can explain why it is bent in half this way." 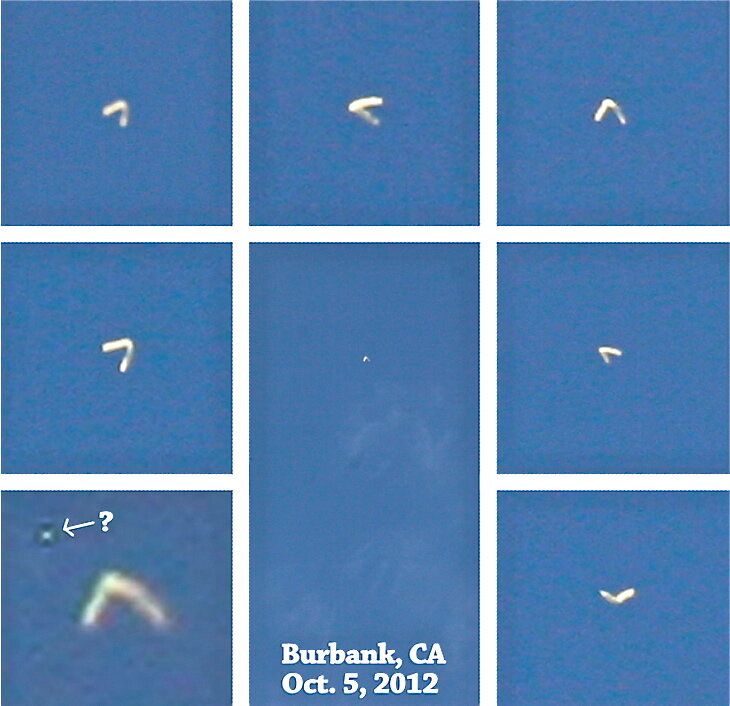 1 / 5
Boomerang UFO Composite Images Burbank, Calif. 10-5-12
This is a composite of images shot by two eyewitnesses of a boomerang-shaped UFO over their Burbank, Calif., home on Oct. 5, 2012.
Mutual UFO Network