UFO sightings don't always get media attention immediately after they occur. When they do, however, those stories are often packed with surprises, even for an old man like me, who has been reporting on these things for decades.

I have written about pilots, for example, who rarely speak out about UFO encounters out of fear of ridicule. After all, who wants to fly with a pilot who "sees things" in the sky? That's a career killer.

That's just one reason timing isn't all that important in my line of work. The real question is the evidence, and that largely comes down to a witness's credibility.

Is there a photograph or a video? Can that account be corroborated? If the answer to either of those questions is yes, it doesn't matter if the sighting was a week ago or a year ago. Suddenly, it's an unexplained phenomena.

I recently stumbled upon such a story. And it began with a personal surprise.

The UFO part of the tale started around 8 p.m. on Oct. 5. In the rural north end of Concord, New Hampshire, Ben Speigel was hanging around with a neighborhood friend when something caught their attention in the distance above some trees. 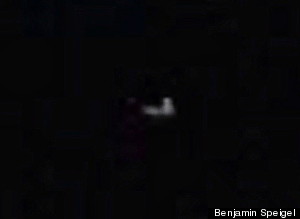 As it turns out, 15-year-old Speigel is my nephew. While I was in New Hampshire earlier this month, he casually mentioned that he may have seen a UFO in October. When I asked him to describe it, he did better than that. He showed me a picture he took of the thing. And that got me real interested.

"We saw what looked like a bright orb in the sky and something that we thought was a helicopter seemed to be following it," Ben told me.

"We didn't know what it was and I took a picture of it on my iPod. When I zoomed in, we could see that it was a V-shape. It was probably as bright as when you look at a plane that blinks, but this wasn't blinking. There was a red light blinking on and off [some distance away from the object] and that's what made us think it was a helicopter." 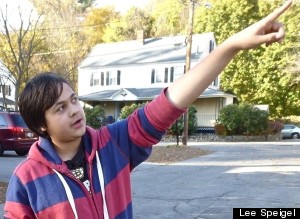 Ben (pictured at left) was struck by how odd this thing moved.

"It was zigzagging across the sky, not fast, but it kept going back and forth. It made a turn and went up and then down and then back and forth again. As it was circling around, it went up and circled again. The object just finally disappeared behind the trees (shown below) and we didn't see it anymore. The whole sighting lasted about five minutes." 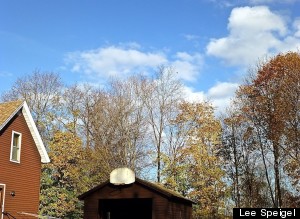 After telling me the story, Ben and I sat at the computer to see if anyone else in Concord or other town may have reported the same object. We found one other account.

An hour after Ben's sighting, and 30 miles south in Nashua, New Hampshire, a family traveling in their car, en route to their home, saw a boomerang-shaped object, with three white bright lights and two smaller, amber colored-lights on the bottom of it.

"We were heading west toward the Everett Turnpike when I spotted a twinkle high up in the sky," Nashua resident Jim Bowe told me last week. "At first glance, you'd think it was just a star, but it was slightly larger than the stars further behind it, and I thought that was weird. My wife and I were watching it and when we turned north, we lost sight of it for a second, and then, there it was again, just above the highway.

"My wife and son kept watching it while I was driving, and it eventually appeared to be just above the treetops, and traveling no more than 30 or 40 mph, because we were doing 50 and we could see it moving slowly, just in front of us. Then, as we drove under it, we could still see it moving over the trees, making no sound whatsoever."

Bowe, 49, recalled how the object was illuminated.

"The lights on this thing were perfectly round and shaped like domes. They were situated at the point -- the nose -- with one on each end of the wings. The lights didn't blink or change, they were just a steady, constant brightness. And there were no red or green marker lights, like you'd see on regular aircraft. My wife said she saw amber colors on each tip, right next to the big dome lights."

The first thing Bowe did after arriving home was to sketch the object, then showed it to his older son, John, who created a computer rendering of the UFO. (See image below) 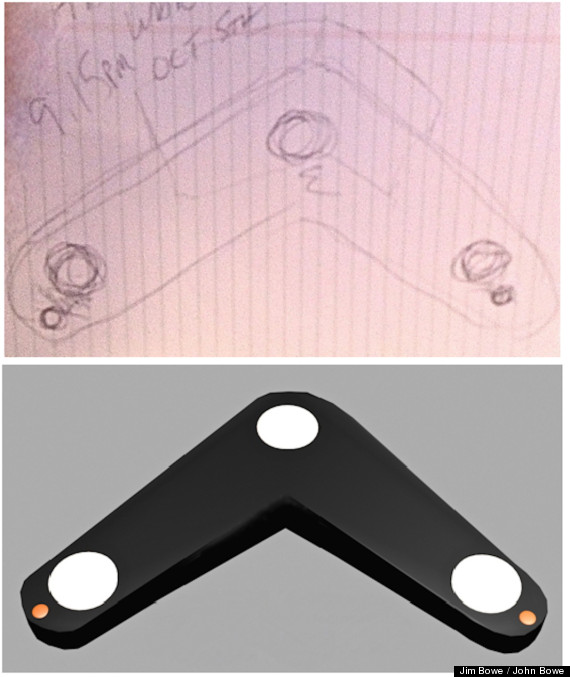 To follow up the sighting, Bowe did two other things. First, he called the nearby Nashua airport.

"I asked them if they could provide me with flight times of planes coming in and out of there and what directions they were going in. I got an email back, saying, 'we're sorry, but at that time of the night, there was nobody here, so we don't have any records.' There was no one on duty at the time [of the sighting]."

The next thing Bowe did was to file a report with the Mutual UFO Network (MUFON), who turned the case over to NH field investigator Mark Podell. He told HuffPost he thinks this most likely has an Earth-based explanation: "I've studied aircraft and propulsion systems for 25 years. I think this sighting adds up to it being a man-made, possibly stealth aircraft that has abilities that most people are not aware of."

Bowe respectfully disagrees with that assessment.

"I think it was extraterrestrial, in my personal opinion. From what I witnessed, I've never seen a craft that could do that -- being that big -- float by without falling out of the sky and not making a sound. It wasn't a blimp or a drone. I estimated the size of it. The wings were about the size of two tour buses -- that's how big this was over the trees."

As with the earlier UFO sighting in Concord (see map below showing the distance between Concord and Nashua), the Bowe incident lasted around five minutes before the object left, heading east above the trees. 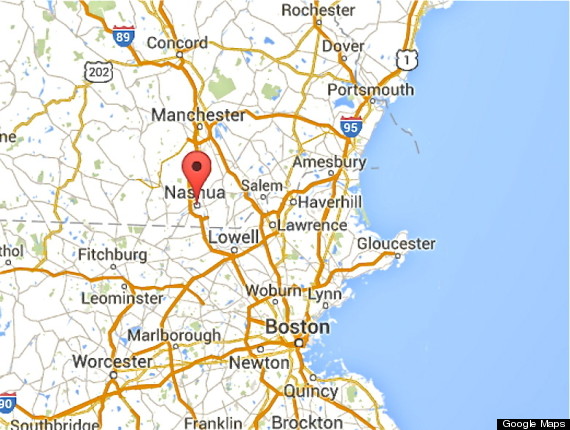 Back in Concord, Ben hesitated to speculate on what he thinks he photographed that night.

"It was a UFO, an unidentified flying object. I didn't know what to think -- it was just there."

The fact that my nephew was one of the witnesses of this object doesn't affect the overall reliability of the report, other than the notion that I can personally attest for his credibility, and that counts for something.

Another important thing is that Ben is the only person who photographed the object, and in UFO cases, the credibility of any images is paramount to the story.

MUFON is continuing its investigation of the New Hampshire boomerang.