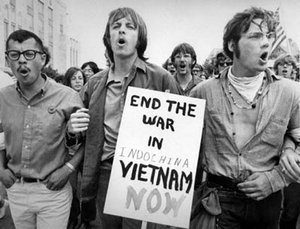 When Time magazine named Trump "Person of the Year" for 2016, many pointed out that the honor had been bestowed on Hitler in 1938. But in 1966, fifty years ago, the magazine named people under age twenty-five--baby boomers--"Man of Year" and offered a lengthy cover story in their January 6, 1967 issue called "The Inheritors."

Explaining their choice, the editors said, "No single earthly figure bestrode the year as did the restless, questing young," a group that "dominates current history." Comparing boomers to the prior, "Silent Generation," the editors write, "Today the young are anything but silent," make "many statements, and appear more deeply committed to the fundamental Western ethos--decency, tolerance, brotherhood--than almost any generation since the age of chivalry."

The editors felt the youth of the day were "most accurately viewed through the campus window." In other words, the elite was ignoring the poor and working class of all colors back then, too. The "Inheritor" they focused on was a white, male, middle-class boomer who would go to college and graduate into a decent job, putting him on the first rung of the ladder to bigger, better, and more.

The economy was strong, corporations and the wealthy paid their fair share of taxes, and the government had both the will and the money to invest in the health and wellbeing of its most vulnerable citizens, creating Medicare, Medicaid, and Head Start. Describing the lived experience of the under 25s, Time said, "Cushioned by unprecedented affluence and the welfare state, he has a sense of economic security unmatched in history." Strong unions and good paying manufacturing jobs meant that the under 25s who didn't go to college could also enjoy the American Dream.

But it didn't quite turn out that way. Reaganomics, globalization, and technological changes set the stage for the under 25s without college to be left behind and left out of the new economy. These are the boomers, fifty years later, who made Donald Trump president.

As post-election analytics show, education is the big divide between the red state and blue state mindsets. Education was preparing boomers for a career and setting their expectations for a standard of living above that of their parents. But more importantly, learning about the history of civilizations, studying arts and sciences, and developing critical thinking skills is personally empowering; it replaces ignorance and leaves less room for fear and hate. The young people profiled by Time magazine likely grew up to be Clinton supporters--boomers who are horrified and saddened that much of the progress our generation fought for in the sixties, bringing about a more inclusive and just society, is now in jeopardy.

As I discuss in my book Beatleness, the media's obsession with teenagers, students, protestors, and hippies from 1964-1970, combined with corporate America's cultivation of boomers as a lucrative market with its own pop culture, contributed to boomers' strong sense of generational identity. This first post-war generation was deemed special and had great expectations. Sadly, with great expectations come great disappointments.

Voters in de-industrialized states expected their lives would be better than the lives they're now living. And adding insult to injury, they felt looked down upon by coastal, blue state culture. Bernie, and later Hillary, pointed the finger of blame for their economic plight in the right direction. But Trump's media savvy manner and hateful message, identifying people of color, immigrants, Muslims, and other minorities as the reason these white boomers' great expectations haven't been met, resonated more. Boomers came of age in a singular moment of American history; white male boomers, even in the working class, had idyllic childhoods in a newly child-centered, optimistic culture. Everything was great. So yes, of course, let's make America great again.

Time's Man of Year issue in January 1967 also ran a letter written by young people questioning the "wide disparity between American statements about Viet Nam and American actions there." Time called the growing "credibility gap" "as urgent a problem as any that confronts the nation today." The editors, along with the rest of the establishment, vastly underestimated the power and commitment of young people who opposed US involvement in Vietnam.

Thirteen months later, when American journalist Walter Cronkite, the most trusted man in America, came out against the war, public opinion started to shift. Nineteen-sixty-eight would bring protests on campuses nationwide. Protests against the selection of the insufficiently dovish Hubert Humphrey at the Democratic Convention--a choice widely perceived, by the young especially, as going against the wishes of the primary voters--turned violent as the whole world watched. It was later determined that one in six demonstrators was actually a government agent of some kind, inciting what an in-depth study concluded was a police riot.

Soon, the credibility gap was further exacerbated by Watergate. By the eighties, the credibility gap had morphed into a general distrust of government and, thanks to Reagan's brilliant messaging, a desire within the electorate to see government's role limited. Trump's boomer supporters, from childhood, to adolescence, to adulthood, were raised to be cynical of the political process and distrustful of government. Given their disappointment and unchanging circumstances, they had nothing to lose by embracing someone who would "shake things up."

Because boomers--of all social classes and irrespective of education--were television natives, they learned about the world differently and saw the world differently than previous generations. Weaned on television, they learned to read emotions and various points of view up close. This is what Time is referring to when they say "The 'Now Generation' had a "keen ability to sense meaning on many levels at the same time," and that they possessed a "built-in bunk detector for sniffing out dishonesty and double standards."

But it seems that boomer's built-in bunk detectors have grown defective or obsolete over fifty years and were, sadly, no match for the razzle-dazzle of Donald Trump--himself a boomer with a lifelong TV obsession-- who appeared to "tell it like it is," a trait, as Time noted fifty years ago, highly admired by boomers.