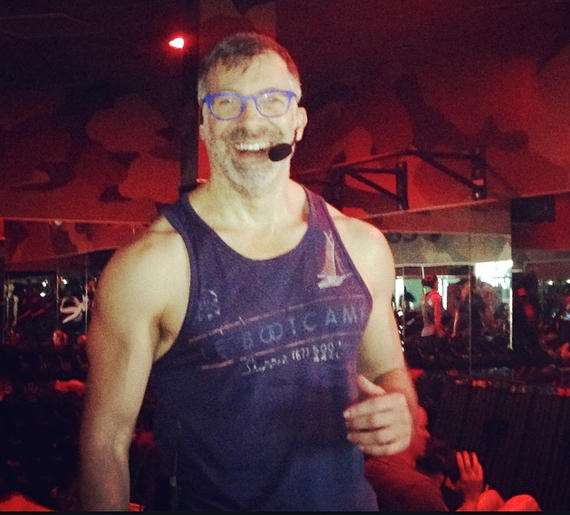 How does a skinny kid from the Bronx with a passion for horror flicks and Broadway become the godfather of an international bootcamp chain? Barry Jay Stich didn't set out to become the namesake of an ever-growing workout empire, it just kind of happened.

Since 1998 Barry's Bootcamp has revolutionized gym workouts and expanded to sixteen locations both nationally and internationally with multiple studios in development. Barry is known as a bit of a drill sergeant, someone who pushes the boundaries of comfort and encourages comradery and teamwork. His tough love approach can sometimes be intimidating, but really, he's not that scary.

Barry's Bootcamp was created out of what was missing from the fitness community in the 90's. "I loved the class atmosphere, but I wasn't getting a gym workout," Barry reflects. "The heaviest weights were ten to twelve pounds and to accomplish everything I still had to go to the gym. Also, classes were not that organized. Pretty much you showed up to body sculpting and did all body parts on one day. Maybe it's my club days that were following me, but the first thing I saw in my head when I thought of Bootcamp was the red lights. I can close my eyes and see it, the free weights, the treadmills, the lights, the different days, working out arms, chest. And it all came together."

The most surprising thing that came out of Bootcamp for Barry was getting sober. "Meeting friends at Bootcamp and having them let me know what sobriety was about helped me take the journey with them. I was thirty-six when Bootcamp launched. I was always open to the possibility of more friends, but it seems like right now my nearest and dearest have been because of Bootcamp or because of sobriety, which is because of Bootcamp."

Barry's tough cookie persona arose from Bootcamp's early days before sobriety. He notably sat or laid on clients as they did push ups, turned music off after complaints on song selection, and made several newbies run holding a large wall clock following constant glances at the time. I bore witness to many of these happenings and they were executed with a bit of mischievous glee and humor. Barry is like an older brother, teasing a smidge and zeroing in on BS. Latecomers were required to jog up steep La Cienga Blvd. and get business cards from The Standard Hotel and if your BFF didn't show, you ran to their abode to retrieve them. All this at six a.m.

Barry's true passion began with songwriting. He moved to Los Angeles in 1983 after Johnny Carson spoke about beautiful downtown Burbank on "The Tonight Show". A self-taught piano player, Barry lived the life of a struggling songwriter working odd jobs at The Pantages and Chinese Theaters. He also landed a job at a PR company and managed Chaka Kahn and Bill Cosby. After his stint in PR Barry worked the front desk at a fitness studio. This desk job ultimately led to the creation of Barry's Bootcamp.

As a kid Barry was equally obsessed with horror films and used a Super 8 Camera to create stop motion animation turning his ankle into a werewolf ankle. In Los Angeles he paired up with various writing partners on a couple of scripts, but then put them down for several years before reading "How To Write A Movie In 21 Days: The Inner Movie Method." "I think I'll write a horror film and see how I do, and boom very addict like behavior I ended up writing twenty-one screenplays."

At fifty-one Barry is on the verge of a new chapter. "I figure fifty-five is a good age to stop standing in front of a room and screaming at people to do push ups at five a.m." He will always be a part of Bootcamp and will continue to work in other facets of the business assisting in growth and franchising. He is excited to churn out more scary scripts and this month Barry begins shooting his first horror feature "The Chosen" which will be released in 2015.

I can't remember the last time Barry was in a bad mood. He has an irresistible smile and exudes bubbly joy and excitement even when it's the crack of dawn and chilly out. He enjoys singing loudly (out of tune) and dances, wiggling on top of a Reebok step. If you're lucky enough you'll get a nickname. I got an "s" added to my surname and most bootcampers think it's always been there. There is a Ma, a Papa, and a Fungaloid to name a few. He knows how to take you some place unfamiliar. I occupy the end treadmill most mornings. It's hidden and out of the spotlight, but on occasion Barry moves me to the middle. Just because. He plays favorite songs on birthdays and 50 Cent's "In Da Club" in celebration. He wears bright blue glasses. Hence a fellow bootcamper named him "Barry Jessy Raphael". He loves his mom and visits her often in Vegas, and he is the first person to call or text when you are blue. He is a new world explorer, shy, a homebody, and an animal lover. He is also a bonafide international brand that established a community, which in turn has shaped many life long friendships and several marriages.

Barry's new path is dusty and untraveled but he is skipping down it happily, growing and learning. He won't be teaching that much longer, so try and catch him before he takes over Broadway and Horror by storm.

See. Not so scary.