The number of people attempting to illegally cross the U.S-Mexico border has plummeted, but the number of migrants dying during the trek through the mostly desert region has not.

The U.S. Customs and Border Protection continues its efforts to secure the border and prevent deaths in the area, Border Patrol officials said. But, while the number of border crossings has declined dramatically in the last five years, the number of deaths has not decreased at the same pace. Human rights organizations attribute the problem to the increased militarization of the U.S.-Mexico border and the absence of government policy addressing the social and economic motivations that prompt migrants to continue to cross, despite the dangers.

"We never thought that we'd be in the business of helping to identify remains like in a war zone, and here we are," said Isabel Garcia, co-chair and founder of the Tucson-based Coalición de Derechos Humanos.

While the precise number of individuals crossing the U.S.-Mexico border without authorization is impossible to tally, Border Patrol’s apprehensions and death data offer the most accurate picture available. Each year the CBP reports the number of bodies found along the Southwest border and the number of migrants that agents bring into custody.

In fiscal year 2011, 327,577 migrants attempted to cross the border illegally, down from 858,638 in FY 2007 -- a nearly 62 percent drop. A closer look at the numbers reveals that although illegal border traffic has slowed and deaths have slightly declined, the proportion of border crossing fatalities to border crossing apprehensions has continued to rise. 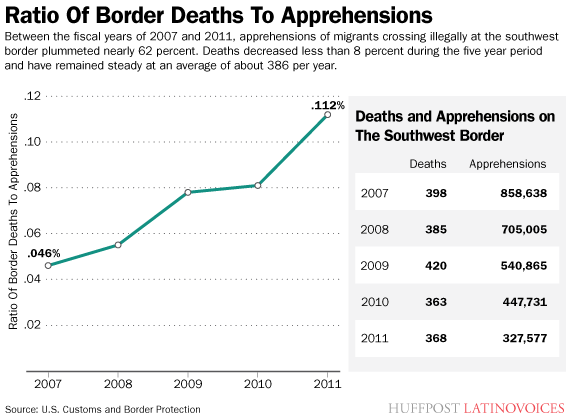 In May, the Pew Hispanic Center found that migration from Mexico to the United States had reached a "standstill" that began in 2005, a first since the wave of immigration to the north began in the 1970s.

During the same period, U.S. Border Patrol increased the number of agents and technology used to monitor the border.

"U.S. Customs and Border Protection has more than doubled the size of the Border Patrol since 2004," Kerry Rogers, a spokeswoman for the Border Patrol, said in an e-mail to The Huffington Post. "Taken as a whole, the additional manpower, technology and resources provided in the last six years represent the most serious and sustained action to secure our border in our nation's history. And it is clear from every key measure that this approach is working."

Increased border monitoring and the historic number of undocumented immigrants deported from the United States has caused migrants to take riskier routes across the border, said Garcia, of the Coalición de Derechos Humanos. Some are desperate to return.

"The more we have militarized the border," Garcia said, "the more walls we put, [the] more technology, [the] more agents we put, people who find that they've got to cross -- whether because they're starving and, more and more right now, because they've got to come back and reunite with their families -- they're going further and further out into the more dangerous areas. That's why we continue to see, at least ratio wise, an increase in the deaths."

"Regardless of how many agents are on the ground or the technology available, the dangerous terrain and inhospitable weather remain a dangerous factor to would-be border crossers," Rogers said. "U.S. Customs and Border Protection has made multiple efforts to try to prevent as many deaths and injuries as possible, most notably the Border Safety Initiative."

The CBP began the Border Safety Initiative in 1998, a bi-national strategy to reduce deaths along the Southwest border. The agency equipped agents with first responder medical training, installed rescue beacons that migrants in crisis can use to call for help and warning signs to deter migrants from making the possibly fatal trek. In 2005, the CBP also began funding the "No Más Cruces en la Frontera" (No More Crossings at the Border/No More Crosses at the Border) campaign to educate potential immigrants about the dangers of crossing the border.

"We are emotionally understanding of the plight of these humans beings," said Jimmy Learned, president of Elevación, the ad agency in charge of the No Más Cruces campaign since its launch. "And I think that's a very important component, too. This is not about laws or anything like that. It's really more humanitarian and education[al]."

Over the years, No Más Cruces has communicated its message through "migra-corridos" -- songs that narrate the dangers migrants face while crossing the border -- mini-documentaries, ads and posters in domestic markets, eight Mexican states and Guatemala. Although CBP finances the $3 million campaign, the materials do not indicate the U.S. government pays for them, Learned said.

While the Coalición de Derechos Humanos and other immigrant advocacy groups support educational efforts to save lives, the campaign cannot solve the problem alone, Garcia said.

"It's a public relations move because we know so well that none of our policies and measures are addressing any root cause issue, addressing why people are coming, and addressing issues that would prevent people from having to come," Garcia said. "Migration is not a law enforcement, military or homeland security issue. It never has [been], especially along this border. It has been an economic, more than anything, social, and political issue."