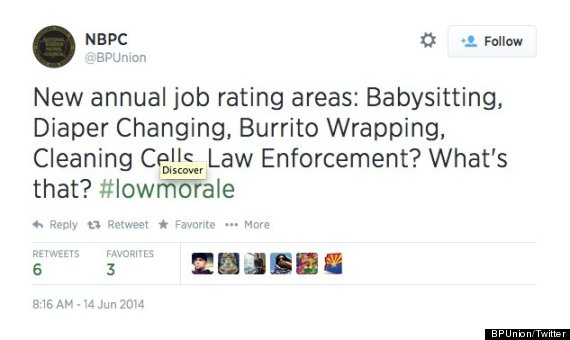 @Nicosan1 What is racist? Those are the duties agents are being assigned.

Nearly 50,000 children have been caught crossing the border without parents since Oct. 1. Disturbing images emerged earlier this month of young immigrants warehoused along the border. The White House has called it an "urgent humanitarian situation."

Shawn Moran, the union's vice president, appeared on Fox News Saturday to lament the situation many border patrol agents find themselves in, characterizing agents as the "hired help."

"There's a reason that we are ranked at the bottom of the federal workforce in morale," said Moran. "And it's because our agents are treated like grade-schoolers, not allowed to make decisions on our own, micromanaged. We live in some godforsaken towns on the Southwest border and just don't have the type of morale that we need to effectively do this job."

"It is demoralizing the way we are treated and to see things like this," Moran went on. "Our agents should be out there patrolling the border, enforcing the laws. But instead we've got them processing, which is a necessary duty, but they're being used basically as the hired help."