At the age of 41, Jaromir Jagr should not have been playing in the Stanley Cup final and keeping up with the fast skating hockey players. At the age of 45, the Israeli grandmaster Boris Gelfand should not be winning major chess tournaments ahead of young talented players and world champions. But sometimes age doesn't matter. 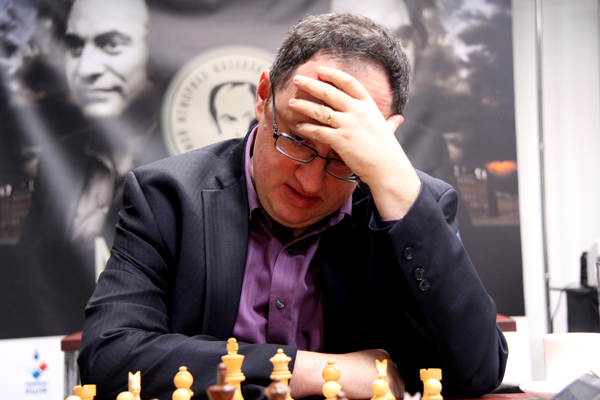 Gelfand in deep thought. The chess magician Mikhail Tal is on the poster behind him.

Last Sunday Gelfand won the prestigious Tal Memorial in Moscow ahead of the world's top-rated grandmaster Magnus Carlsen. The next day he turned 45. He was the oldest participant, a chess relic, reversing the odds that favor much younger players. At 22, Carlsen is half Gelfand's age.

When he wrote his first book My Most Memorable Games in 2005, Gelfand could have hardly predicted that his greatest triumphs lie ahead of him. But the world champion Vladimir Kramnik was impressed by Gelfand's ability to create games where all the moves, from first to last, are linked in a single logical chain. "This inexorable consistency in the realization of his strategic conceptions is Gelfand's main trait," Kramnik wrote in the Preface.

Last year, we saw the Israeli grandmaster play for the world championship against the titleholder Vishy Anand in Moscow. After the classical part of the match ended 6-6, Gelfand narrowly lost in the rapid tiebreaker. For some players, it would be the highlight of their career, but Gelfand didn't stop.

Last month, Gelfand shared first place with Levon Aronian at the Alekhine Memorial and he honored the late world champion Mikhail Tal with another victory. His performance in Moscow brings him back among the Top Ten players in the FIDE rating list. When Gelfand was Carlsen's age of 22 in 1990, he was rated third in the world behind Garry Kasparov and Anatoly Karpov. He is still among the best 23 years later: an incredible chess longevity. He is motivated by curiosity and wants to know what lies behind moves played on the chessboard. He does not mind spending time on analysis.

Gelfand is one of the best prepared players. His openings are like a well-oiled machines, working precisely, and he pays attention to every small detail. He is rarely caught off guard. He believes the opening phase is the most important part of the game and aims to win it every time.

The game against Hikaru Nakamura was crucial for his victory at the Tal Memorial. Nakamura's rambunctious performance led him to the top of the field with a winning hattrick, but pushed him down with losses in the last three rounds. A win against Gelfand would have given Hikaru one and a half point lead on the nearest competitors with two rounds to go -- almost a guaranteed first place. 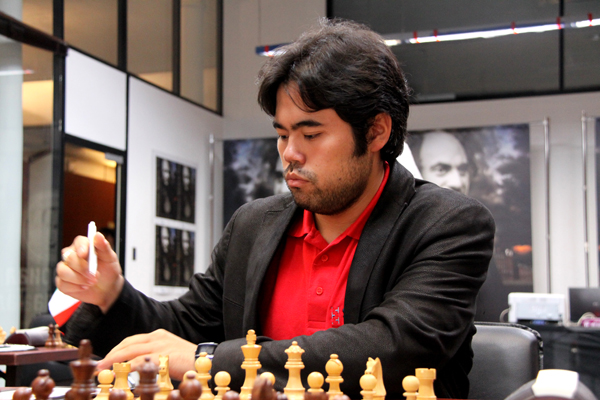 Nakamura before his game against Gelfand.

The Najdorf Sicilian used to be Gelfand's main defense, but he enlarged his repertory and included the Lasker-Pelikan variation. Nakamura didn't get much from the opening. Eventually, the queens went off and black's bishop pair began to gain strength. After 35.Na4, Gelfand got a significant edge for the first time in the game. 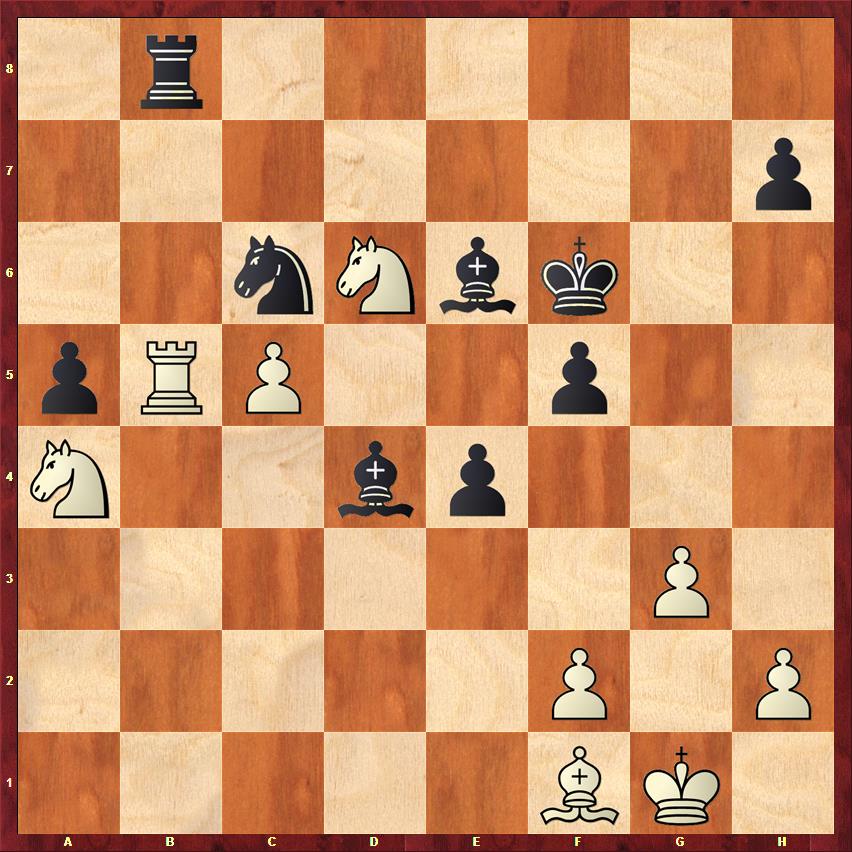 Increasing the range of his bishop pair, Gelfand aims for the white king.

The king is not safe.

The check helps black to create mating threats. But after 42.Nxe2 Bxc5 the passed a-pawn decides.

Two more losses followed and Nakamura was out of contention for top prizes.

The preview of the big match 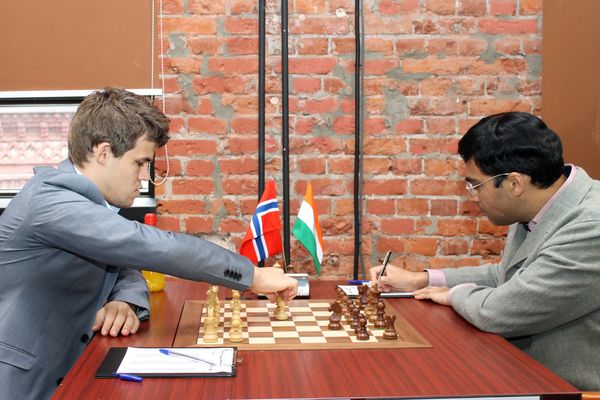 The encounter between Carlsen and Anand was the most anticipated game of the Tal Memorial. It was supposed to be a great preview of their upcoming world championship match, but it wasn't. Anand had a bad day. He could not make up his mind what to do with his light bishop. By the time he transferred it to the square e6, it was too late. Carlsen finished the game with a timely central breakthrough. 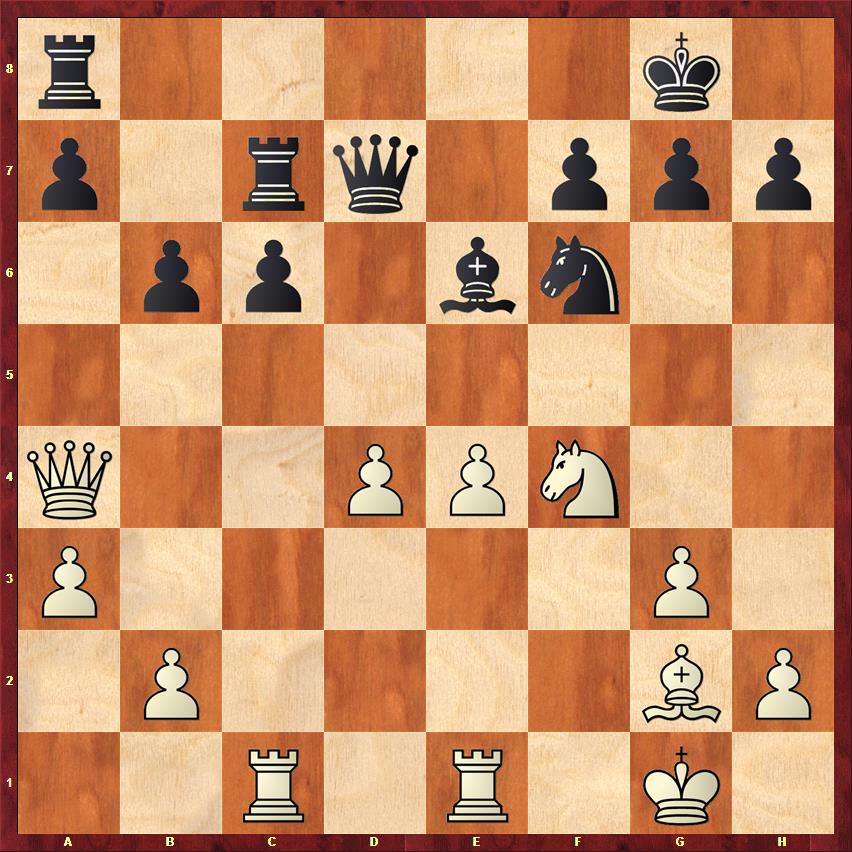 Carlsen is attacking the sensitive square e6 with crosspins. Anand has no way out. 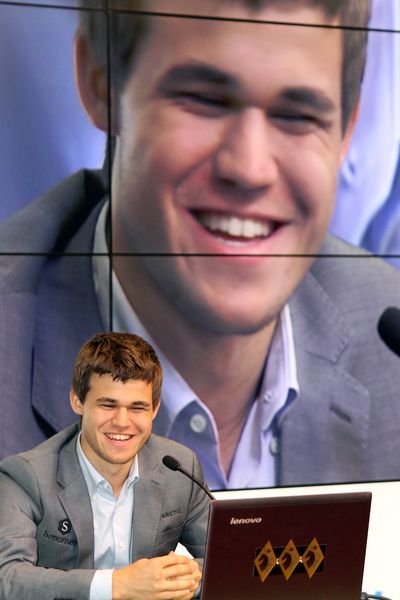 Carlsen is double-happy after his win against Anand.

Carlsen is well aware he will face a different Anand in November. The world champion is known for his meticulous match preparation and he will spend the next four months to get ready. Carlsen will play the Sinquefield Cup, September 9-15, in St. Louis, together with Aronian, Nakamura and the U.S. champion Gata Kamsky. It will be the most significant event in the Gateway to the West since the 1886 world championship match between William Steinitz and Johannes Zukertort.

Anand and Kramnik must be disappointed with their final results in Moscow. It was Anand's last tournament before he defends his world title against Carlsen in November. Kramnik dropped the first two games and could not recover. He lost nearly 19 rating points. The inconspicuously advancing Fabiano Caruana will pass him on the July FIDE rating list. The top four should look like this: Carlsen 2862 points, Aronian 2813 pts, Caruana 2796 pts, Kramnik 2784 pts.