Make a note of the name: Boris Johnson. He is mayor of London. And in a few years, he has a high chance of becoming British prime minister.

In a time when politicians tend to be bland, and to believe it necessary to claim a politically correct pedigree, Johnson is a mold-breaker. 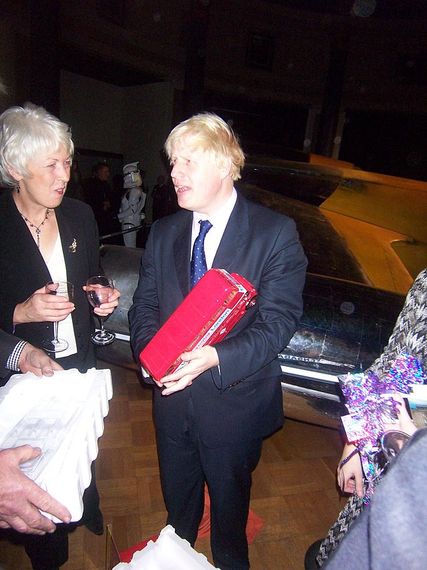 He has been larger-than-life and in scrapes of his own making throughout one of the most colorful careers in public life. Yet Johnson has the knack for transmuting disaster into celebrity, and celebrity into fame and electoral success.

At Balliol College, Oxford, some claim he won the student presidency by pretending to support the Social Democratic Party, the dominant faction at the university. He was a member of Oxford's Bullingdon Club -- a raucous dining group that specialized in trashing restaurants and willingly paying for the damages later. A film about these goings on, called The Riot Club, is in preparation.

After taking a less-than-impressive degree in Classics, Johnson, whose family on both sides was well-connected, launched himself on the world as a management consultant. But that was short-lived because, as he said, "Try as I might, I could not look at an overhead projection of a growth-profit matrix and stay conscious."

On to journalism -- a refuge of sorts for scoundrels -- and a trainee job at the Times of London. Oops! Johnson gets fired for falsifying a quote from his godfather. He works on a provincial paper for a while, and then moves on to the high-Tory Daily Telegraph, where he rises to assistant editor.

Meanwhile, Johnson has political ambitions and gets himself elected as a Conservative member of Parliament, where his antics enliven the House of Commons. As the British are a lot less sensitive about conflicts of interest than are Americans, soon he was editing the prestigious literary and conservative political magazine The Spectator while rising in the ranks of the Conservative Party. He is one of the most prolific writers to have sat in the House of Commons since Winston Churchill.

Johnson, who has a great, white shock of hair that belies the fact that one grandfather was Turkish, rides a bicycle and litters his oratory with classical references. He likes to use his knowledge of the ancient world to illustrate contemporary issues. He even made a television program on the Romans.

But scandal has a way of finding Johnson and his rake's progress toward greatness. The Spectator -- with a tiny staff -- erupted in sexual scandal during his time in the editor's chair. Get this: The publisher, an American woman, was having an affair with a blind member of the British cabinet, the features writer was having an affair with a secretary and Johnson, rising political star and father of four, was, you got it, in what the British like to call a "leg-over" with a star columnist.

He was demoted in the Conservative Party, so he left the House of Commons and ran for mayor of London, defeating the socialist Ken Livingstone. He won a second term, again running against Livingstone.

As mayor, Johnson championed a revolutionary, new London bus. He cheered on London and the Olympics, took credit for its success and when he got stranded on a zip line with two British flags, one in each hand, he turned the disaster into another Johnson publicity success. He entertained the world's press while suspended in midair.

Johnson is now planning a return to national politics in 2015, when he will contest an expectedly safe Conservative seat near London. As a kind of campaign opener, he has penned an extraordinary article in which he links London to ancient Athens and British democracy to the original. He glosses over the failings of the Greek state and the fact that Pericles, his hero, finally lost to the Spartans, while humorously making antiquity available to the British voter of today. It is political literary fun at its best.

Johnson's re-entry into national politics will come at a critical moment, when extreme-right parties threaten the old conservative bloc. Prime Minister David Cameron's standing is low, and he is accused of the "re-toxification" of the Conservative Party.

Read one of the greatest pieces of political writing by seeking out The Spectator on the Web. It is glorious stuff.