I stopped following NFL football when Steve Young retired in 1999 after a string of debilitating concussions left him with "post-concussion syndrome," but I began to question my interest in the game long before that. Over the years, football appears to have evolved into blood sport, where part of the objective of the game is to see how many of your opponents you can get to leave the field on a stretcher. Ironically enough, some of the players are beginning to feel the same way.

Chris Borland's recent retirement after one spectacular season with the San Francisco 49ers has confirmed the obvious: NFL football has become too dangerous. The NFL tacitly agreed when they reached a $765 million settlement with 4,500 former players who claimed they should have been warned about the potential for crippling brain trauma. Even the new rule "barring players from forcibly initiating contact with the crown of their helmet outside the tackle box," (i.e. using the head as a battering ram) isn't enough to allay the fear of serious brain trauma among the players. 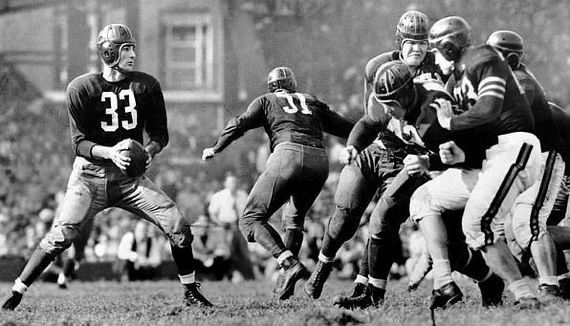 There is reason to believe that the equipment designed to make the game safer, specifically the air-filled, padded helmets, has done the opposite. Prior to the introduction of the Riddell HA helmet in the seventies, it was rare to see a tackler lead with his head. In the days of leather helmets, everybody on the field avoided lowering the head and charging for obvious reasons: it was suicide. Today, the helmets are harder and head is more protected than ever, making it a formidable weapon on the field. Still, according to Gunnar Brolinson, dean of sports medicine at the Virginia Tech College of Osteopathic Medicine, "You can't make a helmet that completely eliminates the risk of concussion."

Unlike the rest of the human body, there are no exercises to increase the strength or thickness of the skull. Players may be able to turn their bodies into machines of fluid, sculpted muscle and avoid injuries through sheer strength, but the only thing a player can do to protect his brain is to try and keep his head out of harm's way. If the NFL went back to a softer helmet and changed the rules of the sport such that gang-tackling, piling on, leading with the head, tackling below the knee or other tackles that increase the risk of the head meeting with the ground or somebody else, fewer concussions might result. Or continue to increase the strength of the helmet, but change the rules to reduce the likelihood of head contact.

Football will never be a safe sport, and for that, Americans love it. Mark Edmundsen of the LA Times likens the sport to military battle: "Football is following orders and sticking to the strategy; it's about acting as a unit and taking hits for the group. Football is generals (coaches) and captains (quarterbacks) and the enlisted guys who play on the line." It's hard to argue with his observation that America has always been, at its core, a war-like nation, and that football, unlike other sports, satisfies a national need for violent spectacles that entail strategic contests of sheer force.

Edmundsen goes on to point out that the psychological reasons behind the basic human need to see people beating the crap out of each other, whether it's on the football field, on the ice, in the boxing ring, on the wrestling mat or on the roller rink, has been a topic of discussion since ancient times. Aristotle felt that the audience for violent spectacles purged their own violent feelings through vicarious identification with the players. Plato, on the other hand, felt that violent spectacles simply bred more violence. There is no question that witnessing a brutal open-field hit can make a guy's blood run hot.

Nonetheless, you have to question the motivation of an individual who risks serious long-term disability for fame and fortune. Sure, a brain-damaged player may be able to afford the best ultra HD TV to watch from his wheelchair, and a nurse to go with it. Or perhaps a player is willing to risk his own future to ensure the financial wellbeing of his family. But the fact that a promising young football star is opting out of the fame, glory and riches of the NFL with safety concerns should be enough to give football fans a moment of pause and perhaps some serious thought about how to make America's greatest pastime a safer, and saner sport.