"I did it my way..." No, Ethan Hawke doesn't sing those lyrics in this faux bio/film about jazz great Chet Baker. But judging by his thoroughly convincing performance and writer/director Robert Budreau's impressionistic screenplay and artsy direction, that was their mindset during this movie's production. Convey the feeling of Baker's existence, not a blow-by-blow, song-to-song, drug-to-drug retelling of his infamous life. They follow their instincts, which lead them to a very creative place. 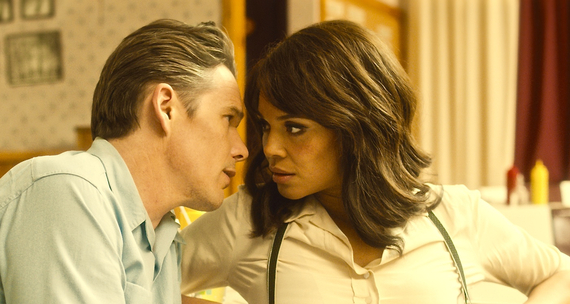 (Photo courtesy of IFC Films)
Ethan Hawke and Carmen Ejogo co-star in Born to Be Blue.

As you watch Chet Baker (Hawke) flounder and struggle for a comeback, you may wonder what on screen is real and what is a concoction. Ignore that impulse. Let his story unfold. Everything will seem plausible enough. Credit Budreau for setting a dreamy mood that depicts the 1950s in black and white and the 1960s in just a few sparse colors (art direction Joel Richardson). The moody cinematography (Steve Cosens) and production design (Aidan Leroux) add atmosphere. The alluring trumpet playing (Kevin Turcotte) and score (composer David Braid) grip the soul. Go back in time to the sweet pocket of the jazz era.

In the '50s Chet Baker achieves great success in the jazz world based on his GQ looks, sweet trumpet playing and a talent for simple singing. He doesn't have Mel Torme or Tony Bennett's pipes. He uses his voice like an instrument, making his vocals sound as pure as a horn. Ladies flock to his performances. Jazz greats like Miles Davis (Kedar Brown) and Dizzie Gillespie (Kevin Hanchard) are his contemporaries. A producer wants him to star in a bio film. And so he does, and that's where he meets the love of his life, his co-star Jane (Carmen Ejogo, Selma).

In the 1960s, Baker finds himself in an Italian jail cell, incarcerated for drug use. He has been beaten up during a drug deal gone bad, and has lost his teeth. Heroin addiction makes him fidgety and irresponsible. Yet he has his music and hope for a return to his successful career, even though addiction sabotages his efforts. Jane accompanies him on his bumpy journey. She gives up her acting career to help him get back on his feet. Try as he may, even with the support of his producer Dick (Callum Keith Rennie, Californication), he falls off the wagon as much as he climbs on. He plays jazz, but his life is a case of the blues.

Watching Baker's misery, insecurities, failings and accomplishments, for 98 minutes, is never less than magnetic. By all accounts, it is the tortured, train-wreck life that the real Chesney Henry "Chet" Baker, Jr. led. (Check out the biography Deep in a Dream: The Long Night of Chet Baker, or the documentary Let's Get Lost), His essence rings true here, regardless of what is real and what is not. The jumbled storytelling, the music, the performances and direction feel alternately like B&W photos coming to life or modern mid-century sketches turning into live action.

An unimaginative director would have done a paint-by-numbers bio/drama. Budreau, however, formed a creative idea, pulled his tech crew and cast into his dream world and completed his concept perfectly.

Ethan Hawke's performance is as impressive as the music. In real life he looks like an overgrown, Midwest high school kid. In the movie, through his own magic, he acts the part of a seductively handsome man who could charm the panties off a nun. Hawke does not have the James Dean cheekbones Baker had, but he creates that illusion. He mimes trumpet playing meticulously. He's an actor who learned how to produce a silky voice that is so melodious you're eager for him to step up to the mic and sing. This is Hawke's best performance ever. He carries this film on his back.

Jane is a hard roll to play, chiefly because she is a composite of several of Baker's lovers. Yet Carmen Ejogo brings balance to a character who supports her man, but needs her own career. She is wonderful in every scene. She and Ethan make the romance real. Brown and Hanchard bring back the golden age of jazz in fleeting moments as Davis and Gillespie. Rennie as the stalwart producer and Tony Nappo as a parole officer provide boundaries for Baker's free spirit. Stephen McHattie, as Chet's father, is reminiscent of a gruff looking, earthy Sam Shephard.

In Born to be Blue, Chet Baker, the pioneer of the West Coast jazz scene, gets his story told. After the movie, don't be surprised if you find yourself downloading or streaming his music. If you do you will be struck by the haunting similarities of his sound and those from this very evocative and inventive film.