In Chicago and New York City, school buses are back in motion, the air is crisp, and the days are getting shorter. These signs all point to one thing: marathon season.

Last Sunday, 58 runners ran the Chicago Marathon as part of our Team Healthy Kids to raise money that will help schools implement critical health and wellness programming for students nationwide. On November 1, 25 runners on our team will join the throngs of people running in the New York City Marathon to do the same. For many, a marathon is the epitome of aspirational athleticism and triumph. When completed for a charity, which so many runners do these days, a marathon makes the countless hours of training not only worthwhile, but that much more rewarding.

However, when it comes to health and fitness, we don't all have to be marathon runners, or even runners. We simply have to put one foot in front of the other and do something we enjoy and that keeps us active for at least 30-60 minutes per day. And who knows? That 30-minute walk each day could make a runner out of you and lead you to run a 5K, 10K or even a full marathon one day.

That's exactly what happened to one of our Chicago runners. Angela Gillis of Beaumont, Texas came to us with a deeply personal reason for running with our team. Angela had been overweight since childhood until she and her husband, Willie, decided on their one year wedding anniversary in 2011 to lose the weight together -- 500 pounds combined, to be exact. Together, they embarked on the journey, one pound at a time. There were no gimmicks or fad diets involved. They simply changed their diets, cut back on how much they ate, got smarter about their food choices, and increased their physical activity. Angela got bored of walking on the treadmill, so she started running. And she hasn't stopped since. The Chicago Marathon was number 28 for her and the 12th as part of her goal to run a marathon in every state.

So even if you are not planning to run marathon this year, or ever, let Angela's story, and that of so many like her, inspire you to put one foot in front of the other. Almost daily it seems we read a new study about the dangers of a sedentary lifestyle. We are encouraged to walk during the day, take the stairs, anything to move our bodies and counter the effects of sitting all day at a desk.

We know sitting all day is bad for our children, too, and not just from a health perspective. Teachers see the benefits of improved classroom behavior and better academic performance when kids get to move and release energy during recess or classroom activity breaks. Around the country, innovative schools are bringing pedal desks, pedometers, stability balls and other physical activities into the classroom and school day to help stimulate the brain and body at the same time. These tools in the classroom should become the norm, not the exception.

We have come many miles and have many still to go in the fight to improve the health and wellness of students and our schools nationwide. You will hear runners say that it's not about the pace, it's simply about finishing. Well, the need to address school health is an urgent one, but we may not get there as quickly as we'd like. What matters is that we do it together with our eyes on the finish line, always moving forward, one foot in front of the other. 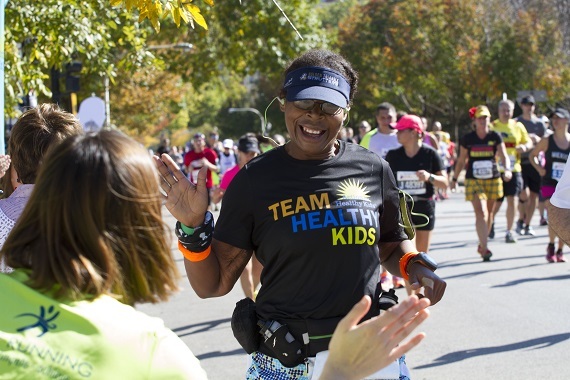