One night in 2011, Xenia Papastavrou was at a restaurant in the Athenian suburb of Chalandri. She noticed how much of the food around her was wasted. Having worked at a food bank in the past, she wondered what happened to all the restaurant's leftover food. A few months later, while images of the breadlines -- or “sisitia” -- in Greece received international attention, Papastavrou, along with Alexandros Theodoridis and Alexia Moatsou, founded Boroume, which means “We can.” Their aim was to become the connecting link between those who had extra food to give away and those who needed it. “At first we started with a few cheese pies that were donated by a small cantina, called Oscar, in the neighborhood of Ayioi Anargiroi,” Theodoridis told HuffPost Greece. “Gradually, things got more organized, and in January 2012 the three of us founded Boroume.” Three years later, they have given approximately two million portions of food to the hungry. Boroume collaborates with more than 800 institutions to connect with those in need. The supply map In Boroume’s small office in the center of Athens, the telephones don’t stop ringing. A big map of Greece, like those that can be found in the elementary schools, is filled with little flags that mark every point that Boroume has worked. A much more detailed digital map can be found on their site -- one can insert a postal code or area name to find the closest Boroume partner institution or social organization. They also recently created an Android app that does exactly the same job. Boroume gives away an average of 30,000 portions of food each day. Its funding is 100 percent private and comes from a broad range of donors, from big institutions to individuals who wish to offer their leftover food. "I was feeling very bad that I was going to throw so much food away."

The Boroume team has many anecdotes about food offers, and, as Theodoridis stresses, the joy that all parties feel afterward. Those who donate food and the beneficiaries -- not to mention Boroume's staff -- feel joy because they know their work is helping others. They spoke to HuffPost Greece about just two of the many incidents that have occurred in the past years.

Theodoridis recalled: “One night, we get this call from a man who owns a bakery in Haidari [a suburb west of Athens], who tells us that he had 60 loaves of bread left. Somehow, we remembered that somebody from a group that works with us called 'Draseis Plission' (Action Near You) lived next to the bakery. So we called him and he was in shock. He said: ‘I can’t believe that you are calling me now. I have prepared soup that we are taking to the homeless tonight and I was thinking that I didn’t have enough money to buy bread.' This made him extremely happy. But also, the people from the bakery wrote to us to tell us how pleased they were that we helped them so quickly, and enabled them to give their bread to people in need instead of throwing it away.” He continued: “Another time, it was 11 o’clock on a Saturday night, and we got a phone call from a man working at the Veneti bakery on Galatsi [a northern Athens suburb]. They had 2 huge cartons of different kinds of pies that they were going to throw away. The owner told me: ‘Thank you so much for coming because I was feeling very bad that I was going to throw so much food away.’ The saleswomen were happy because they make the pies every morning and they were sad to know that all this food would be wasted. We took them to Floga (an institution for children with cancer) and the person who is responsible told us how glad he was, because in this way they could cover all the kids’ breakfasts for two days. And our joy was immense. We all won.” 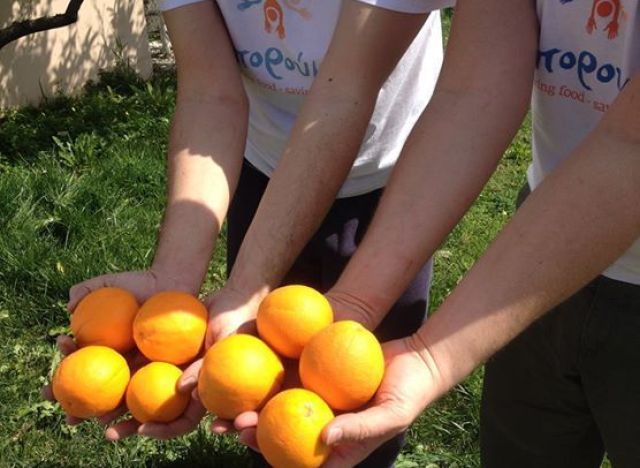 "It’s all a matter of human dignity.”
Boroume's latest plans aim to take advantage of unallocated agricultural surplus, as well as a new program called “We are Family.” Many Greeks of the Greek diaspora, but also people from other nationalities, were willing to help one specific family every month. So a special program was created for families in need. Every family receives a voucher for food from one of two Greek supermarket chains. “The social services hand them out to the chosen beneficiaries and explain very clearly to them, that with these they can buy food. All the receipts are scanned and sent to us via email so that the benefactor can check them out at any time,” Theodoridis said. “The most important thing of all is something that we were told by social services, something that we hadn’t even thought about," he said. "The families need to get out of the breadlines. A breadline is a very harsh environment. There is nothing worse than to see a mother with her child waiting on this line. Think how much better it is for the child to watch his mother cooking at home. It’s all a matter of human dignity.”
Download
Calling all HuffPost superfans!
Sign up for membership to become a founding member and help shape HuffPost's next chapter
Join HuffPost