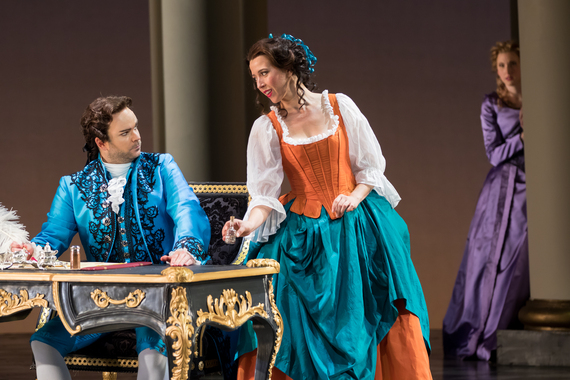 Still reeling from the mammoth Ring cycles it produced in the spring, Washington National Opera opened its 2016-17 season last week with an uneven, unjaded, if not unenjoyable, performance of Mozart's The Marriage of Figaro that just couldn't turn separate "jinx" from the desired "hijinks."

Certainly there were no real nadirs to the performance, but it just didn't gel. This is certainly owing in some part to James Gaffigan's uninspired, indelicate conducting that made Mozart's quicksilver opera - one that unfolds over the course of a single day - seem episodic and lumpy. One of the great things about watching a masterpiece like Figaro is that almost every viewing yields new insights about the piece; no further insights came from Maestro Gaffigan, though, and the WNO Orchestra seemed a little all-over-the-place on more than one occasion.

On the wedding day of Figaro, the valet of the philandering Count Almaviva, to his bride, Susanna, the maid of the melancholy Countess Almaviva, the Count desires to invoke the droit de seigneur, a custom that allows the master of the house to sleep with one of his servants before her wedding night. The servants team up to teach the Count a lesson and enlist his wife's help. Throw into the mix a libidinous pageboy, a couple of squabbling older servants, and some needlessly-confusing plot devicesm, and you have Mozart and librettist Lorenzo Da Ponte's sparkling opera. 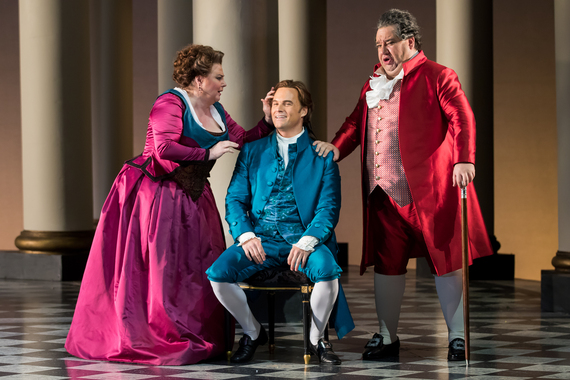 Ryan McKinny as Figaro managed to wield both a beautiful voice and a relaxed, conversational style, but he still lacked the vocal and physical charisma the title character demands. His bride, Susanna, was sung capably by the lustrous-voiced Lisette Oropesa, even if her voice is missing a tad of the brilliance of past years. Amanda Majeski and Joshua Hopkins as the Count and melancholy Countess Almaviva constituted the other couple. Majeski possesses a limpid voice with an even vibrato that gorgeously poured out "Porgi amor" and "Dove sono" (even if the latter suffered from some clipped phrasing), but she made absolutely no use of DaPonte's text to the point that when she "forgave" the Count at the end, it more or less went for naught (even despite the surtitles). Joshua Hopkins as the Count, though, brought vocal heft and rich tone despite limited technical capacity. The highlight of the cast was Aleksandra Romano's liltingly-voiced Cherubino with a plummy lower range and an unrestricted upper range. Her "Non so più," especially, was both beautifully sung and absolutely brimming with sexual fervor.

The cast was rounded out by the dependably secure Betsy Bishop as a delightfully ditzy Marcellina and Valeriano Lanchas with an authoritative and resonant timbre as Dr. Bartolo. Keith Jameson lent an easily-produced comprimario tenor as Don Basilio and Ariana Wehr was a spunky Barbarina.

Peter Kazaras' relentlessly straightforward and traditional production was an improvement from his wholly uninspired Thieving Magpie at Glimmerglass this summer and was staged effectively in Benoit Dugardyn's attractive, column-dominated sets that originated at the Glimmerglass Festival in 2001. Myung Hee Cho's costumes, though eye-popping, had the tendency to be a bit shapeless. In their few appearances, the WNO Chorus was impressive and made an ample sound.

Figaro is harder to pull off than it is given credit for - unalloyed farce just doesn't have the same viability in our cynical society that it had 300 years ago, even despite Mozart's revelations about human behavior. But if WNO approaches Daughter of the Regiment, its next opera and a slapstick, wide-eyed look at young love, with the same attitude with which it approached Figaro, well, then, it should be worth a trip over the Alps for.

The Marriage of Figaro continues through October 2nd. 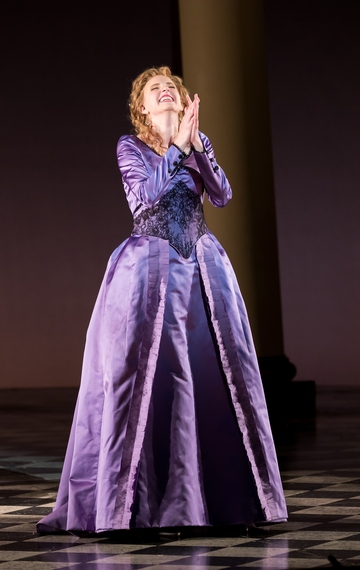 All photos by Scott Suchman for WNO