Across from the Lincoln Center in New York City, in an old church-like building with wooden pews, cracked plaster ceiling towering over her and the soft lighting, Amira Medunjanin performed Bosnian traditional folk songs "sevdah" for a crowd of approximately 400 people on October 29th.

Amira is on her USA Tour, bringing a part of Bosnian culture to North America. In her own words, she is proud of her heritage and wants to tell the stories that were safe-guarded for generations and passed down verbally for five centuries, in order for the likes of Amira and her fellow musicians to bring the richness of this European-Balkan's culture to America and the world.

The space where she performed belongs to the New York Society of Ethical Culture, which makes the performance significant for me in many ways. Society of Ethical Culture explains the Ethical Movement on their website as: ...religion centered on ethics, not theology, whose mission is to encourage respect for humanity and nature and to create a better world. Members are committed to personal ethical development in their relationships with others and in activities involving social justice and environmental stewardship.

A long tumultuous past of Bosnia and Herzegovina and the most recent war that the country weathered are long standing witnesses how religions can be used to divide people and how human need for power can guide actions of those who seek it. People believe that they are threatened by those who are different in any way, yet, Amira's performance in the space where members of the Ethical Community share experiences and transcend individual needs shows how the beauty of music can touch the hearts of many, Bosnians and even a few Americans present who were moved by her unique voice and passion.

For me this performance and the location itself were witnesses of how my own identity was not really lost, as I move forward, living in a country I was not born in. I may not understand or fit into Bosnian society anymore, as I have lived in America for the past eighteen years of my life, but Amira released the deeply engrained love and passion and understanding of sevdah inside of me and others present at the concert.

Presenter introduced Amira as a storyteller, not a singer. She entered the stage with a queen-like grace, humble in her performance. Her accompanying guitarists and a base player, played the strings with such ease and passion that it mesmerized my senses and brought me back into the world so far away and somehow so close. Part of my own DNA reverberated on each note and my heart thudded for the entire length of the performance wanting to leap out and join in the soulful renditions of the centuries old folk songs.

Amira joins the new generation of those who are striving to preserve sevdah and bring more modern renditions to the traditional songs. Along with Damir Imamovic, Mostar Sevdah Reunion and Bozo Vreco, to name a few, she bears witness to something that survived many destructive events that Bosnian region has seen.

Her companions Ante Gelo and Zvonimir Sestak bring a sound so pure, full of soulfulness and passion, so rich and contemporary that it feels like these songs were written a few months ago in a modern studio, a modern author feeling lost and hungering for the unrequited love. 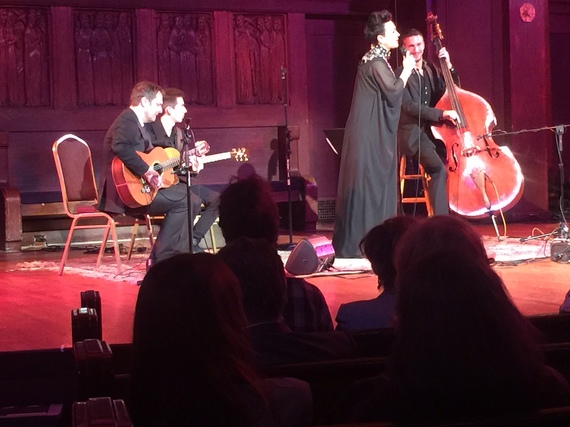 A fourth member of her ensemble was a young Nikola Stajic, who is studying music in Boston and whom the original trio met there, as they arrived to perform their first set of the tour. This young guitarist/artist fit well with the group and once more proved that the Ethical Society's message of unity and the sevdah's universal message of beauty and love can touch us regardless where we live, where we were born and what religion or nationality we belong.

Thank you Amira for the unforgettable experience.