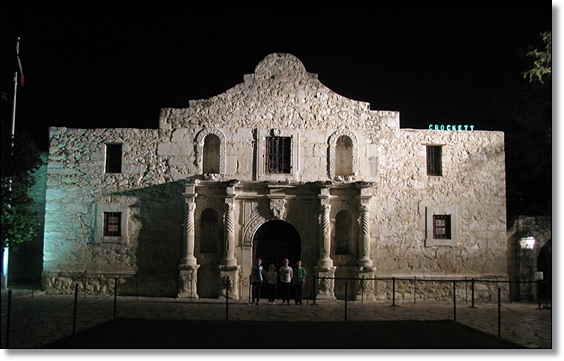 From the massacre of all its defenders, "Remember the Alamo" became the call to victory. Executing all the defenders of Srebrenica and expelling all its Bosniak residents was the tactic that was intended to also wipe away all of Bosnia & Herzegovina. The families of the victims of Srebrenica rightfully assume our attention and respect every July 11 to remember those who were dumped into mass graves but who will now never be forgotten. However, it is not only about reflecting upon the personal losses, but also it has become about "Remember Srebrenica" -- a call for all Bosnia & Herzegovina (BiH) to again be realized as an open, multicultural and free society and equal partner in the Euro-Atlantic family.

Gluttony of Ethnic Cleansing:   Slobodan Milosevic and General Ratko Mladic, as despotic Generalissimo Santa Anna, employed the tactic of "no prisoners" to try to wipe away Bosnia & Herzegovina (BiH) in a brutal assault against Srebrenica (and the other UN "safe areas" and presumably NATO "Protected Zones" of Zepa, Gorazde, Bihac, Tuzla as well as Sarajevo). Mladic and Karadzic had promised a war of annihilation against the "Muslims." After an initial flood of murders, concentration camps, and genocide, the campaign of ethnic cleansing had been blunted by BiH's own defenders and citizens. It was an unexpected survival when most big capitals had forecast that BiH would soon be swept away by the overwhelming weapons superiority of Serbia's military and para-military. The conflict though persisted for another three years after the initial blitzkrieg and gluttony of murder and expulsions. Srebrenica particularly captured Mladic's ire.

Already late in the spring of 1995, Mladic relaunched his plans for eliminating Srebrenica. His besieging forces tightened the noose, denying the UN Peacekeepers and particularly the local population badly needed medicines and food. Srebrenica's citizens and thousands of refugees from other ethnically cleansed nearby towns/villages in particular suffered misery and deprivation, and Mladic followed a similar strategy in all of BiH's cities. Seeking to divide BiH citizens by ethnicity, he offered ethnic "Serbs" the opportunity to abandon their fellow Bosnians and Herzegovinians, much as Santa Anna had done at the Alamo.

An Example by Genocide:

Mladic was determined, as Santa Anna at the Alamo, to make an example of Srebrenica and resume his now-stalled ethnic cleansing campaign intended to wipe away all and not just some of BiH. Srebrenica had become a symbolic, military and strategic impediment to Milosevic's, Karadzic's and Mladic's design for a "Greater Serbia." The UN and NATO would prove themselves an unwilling and false protector of Srebrenica. (In fact, EU representative Carl Bildt, UNPROFOR Commander General Bernard Janvier, UN Head Asushi Akashi, as well as U.S. mediator Richard Holbrooke, determined to betray Srebrenica as well as Zepa and Gorazde to Mladic, Milosevic and Karadzic, presumably to satisfy their territorial ambitions and get them to come to the negotiating table. I have alleged this not-so-well-known fact since the late 1990s.)

Unfortunately, through the intervention of nationalists in Moscow as well as Bildt and Holbrooke, Mladic was saved from Santa Anna's fate of a complete demise. Rather in the Dayton Talks, they insisted upon Srebrenica and Zepa, despite their overwhelming Bosnian character, history and population, being left in the hands of Mladic's, Milosevic's, and Karadzic's cohorts -- some have defined as being allowed to retain the fruits of the crime of genocide. Both as an American and then BiH Foreign Minister, I cannot see this other than as an abandonment of the rule of law as well as that of European and American values. Undoubtedly, most Srebrenica survivors and Bosnians/Herzegovinians see this as a more personal betrayal. It also serves today as a constant reminder, much like "Remember the Alamo."

When I first saw the original film The Alamo (with John Wayne as Davy Crocket and Richard Widmark as James Bowie) at the Sarajevo summer theater, I was still a very young boy and before my journey started to become an American. It is one of my earlier memories and the first and still one of the most compelling impressions of film upon me combining art and idea. "Never Again,"  "I Have a Dream," "Viva Zapata," "We are the World,"  "Remember the Alamo" -- some ideas resonate beyond state and culture as well as time. There have been several more films written/screened about The Alamo. However, one idea persists of grasping victory and survival from loss inflicted with seeming irreversibility.

Echoing to Anders Behring Breivik Mass Murders: Parallels in history may be selective and inappropriate. In this instance, some are more relevant while others perhaps not. Like Santa Anna, Mladic referred to Bosnian "Muslims" as traitors -- in this instance to Christendom. Upon his entry into the fallen Srebrenica, Mladic offered it as a gift to the Serb people and as revenge for the Serbian defeat centuries earlier at the hands of the Ottomans. Unlike most of the newly arrived Texans facing Santa Anna, Bosniaks were the original Slavic inhabitants and most were part of a loose Bosnian Church that was treated as heretical by both the Eastern and Western Christian hierarchies. BiH was also an independent kingdom well beyond current borders during several Middle-Age centuries.

More Losses to Come for Santa Anna & Serbia's Nationalism: Santa Anna had grasped a fleeting victory at The Alamo. More critically, it had exhausted his resources and provided a sense of false confidence. History has judged Santa Ana unfavorably in terms of his own citizens and those he thought that he had forever eliminated at The Alamo. A few years later, Santa Anna would lose half of Mexico's then-territory to an USA driven by "Manifest Destiny." Serb ultra-nationalists had claimed Srebrenica as a historic victory, but in today's world genocide cannot be masked as triumph even as some exhaust efforts to rewrite history. Since Srebrenica, Belgrade has lost Montenegro and Kosovo.

As in the case of the war for Texas, brave men and women may struggle and die on both sides of a conflict. Despots and fascists can exploit fear, identity or a false notion of patriotism just as readily as we may be motivated by noble causes or the inescapable responsibility to defend from direct assault. War is an illusion driven to a hard reality. Revenge offers no greater satisfaction. Demands for justice for Srebrenica remind of how untenable the status quo in all of BiH -- when victims have to still plead for recognition of the wrongs committed even if not restitution. Breaking the illusion of inevitable conflict is part of recognizing the wrongs done to us and to others in our name. (The "Mothers of Srebrenica" victims group that has been first to extend hand of shared loss and commiseration to those who suffered losses of loved ones in Serbia and Croatia -- recall Gandhi: "The weak can never forgive. It is the attribute of the strong." Read our previous article:  "Justice May Be Slow but It is Inevitable".)

"In Reality there are as Many Religions as Individuals": Gandhi

Many Serbs, Croats, "Others" as well as Bosniaks joined to defend BiH. New Texans were joined by native Mexicans in resisting Santa Ana, and Texas eventually became part of a broader United States -- helping reinforce America's multi-ethnic character even as some may seek to now deny it in the heart of the Lone Star. "Remember Srebrenica" must be a call to recognize the humanity in all of us and a commitment to a new way that transcends current divisions born out of  illusions of Divine preferences for some over the "Other" -- otherwise a non-virtuous cycle will come to prevail and feed new conflict and violence. While history offers parallels and lessons we are not doomed to repeat it, that is if we recognize it without illusion.