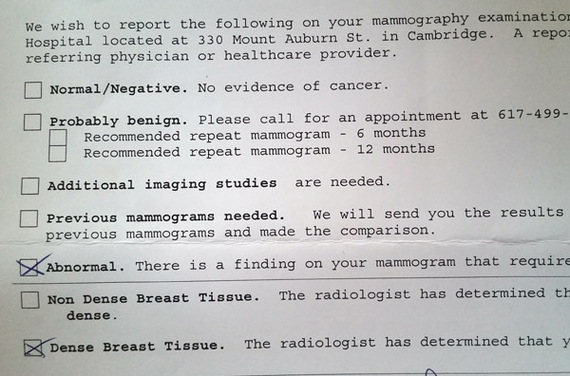 Not the kind of thing you like to see, generally speaking. The document I had to sign that said I would need a biopsy. I signed it while lying on my back on the ultrasound table. (Though they told me not to "freak out" about "abnormal" -- that they "have to check that box." This is the "Zagat's" of "cancer screening" "photo captions.")

I have to go for a biopsy tomorrow. I've been writing about it a lot though not sharing that much.

See, I'm working on a book about my parents called Dementia Makes People Laugh, Cancer Makes People Cry -- my mother died of ovarian cancer and had breast cancer first -- and so this is a relevant experience to the narrative. I went for my first mammogram a couple weeks ago so I have had my mother's experiences at the forefront of my mind.

Because something looked funny to the doctors at The Hoffman Breast Center at Mount Auburn Hospital in Cambridge, Massachusetts, I had to go back for another mammogram. And then because they don't often see calcifications in someone as young as me, and calcifications can indicate cancer very early on, and because of my family history (my mother was diagnosed at 53), they want to take a closer look at me. So they're doing that tomorrow with a needle and then somebody else will look at the cells under a microscope in the following days and we'll go from there.

So tomorrow I have a stereotactic biospy in which I put my boob in a hole in a table and they guide the needle where it needs to go with a mammogram machine, take samples, and then they put titanium clips in there -- why they call them "clips," which sounds like something that pinches, instead of "tags," is just another weirdo detail in my bag of weirdo semantic details.

Anyway, my breast will stay compressed for 20-30 minutes. And then I put on a sports bra and come home with an ice pack that I can "reuse throughout the day." And eat White Castle cheeseburgers. Maybe.

I haven't been able to take my regular fish oil this week, or Aleve or Advil (which sucks because I have my period and am in Cramptown, USA), because they thin the blood. Since the doctor numbs the area but sticks a needle in a decent length they want to minimize the bleeding -- also so I can get out of there and back to business as usual as soon as possible. That said, it takes 3-5 days to find out the results -- so "business as usual" hopefully won't be anxiety. I can't take a bath until the next day -- which is often my go-to for after stressful situations.

This past week has been full of ups and downs. Luckily I have loving, encouraging people around me. I have a few friends with whom I've shared this who have managed not to say weird stuff to me (and only one who has said weird stuff). And I feel much closer to my sisters because they have all made me feel better. They all have dense breasts as well, and early calcifications, and two of them have had to go for biopsies as well. So I'm in good company. I've felt really lucky that I have them to talk to. And we're all over-thinkers, so it helped to know I wasn't crazy looking up at the chewed-up ceiling tiles in the ultrasound room and thinking, "What the f*** am I doing here? I didn't even research this place!" Or at least it made me know I'm not alone.

My husband has been caring and helpful, too. When I got home after hearing I needed a biopsy I wasn't in the best place. I did OK, but I went down the road of "I don't want this to be my life, I have great respect for women who have fought breast cancer but I'm not ready to be one of them." He hugged me and supported me and continues to. And we're going to eat fried chicken soon. Mashed potatoes and mac and cheese.

So after tomorrow when I get needled and then get the results I'm in some limbo -- which isn't totally foreign to me. I have a morning ritual and I included yoga starting a couple months ago, almost as if I knew this was going to happen -- because the yoga has been the best thing to quell my nerves over the last week. To be able to access the awareness behind the anxiety has been emboldening. I've even had some moments of pure joy because I've realized that I'm OK and that I can take this time to gain more clarity on what I really want. I've felt lucky that I have writing to come to as well. And the fact that I want to write while this is going on is very heartening in that way where we like to be sure of our purpose but our ego always has to pick at it. In spite of some scared feelings all of that feels pretty expansive.

At some point I'll make this post less bland but for now here it is because: cramps, biopsy. I suppose I could just say I can't blame them for wanting to get a closer look at dem titties. For now I'll leave it at that.