Like any other comedian, Boston-based stand-up comic Dana J. Bein is ruled by "the hustle." Comedy's DYI culture makes it easier than ever to create and share content. There is no reason to wait -- for agents or network deals. It also means there is no time to wait. That's why Bein decided it was time to both go big and go home to record his first live comedy album.

"When I think about the successes I have had to this point, the biggest ones have been when I planted a flag myself," says Bein talking about how his comedy career has always been about self-direction and self-starting. For nearly two decades, Bein has been a staple of the Boston comedy scene. He gravitated to the city from West Springfield, Mass. after college in 2001 and earned a spot as a cast member at ImprovBoston (IB), one of the city's popular improv and sketch comedy theatres. As an improviser also very invested in stand-up, Bein helped to create IB's stand-up program from scratch, working along side then Artistic Director Will Luera, designing and teaching curriculum, running workshops, and creating performance opportunities. Ten years after Bein's initial involvement, ImprovBoston boasts five nights of stand-up shows and consistently sold-out classes in the stand-up program. 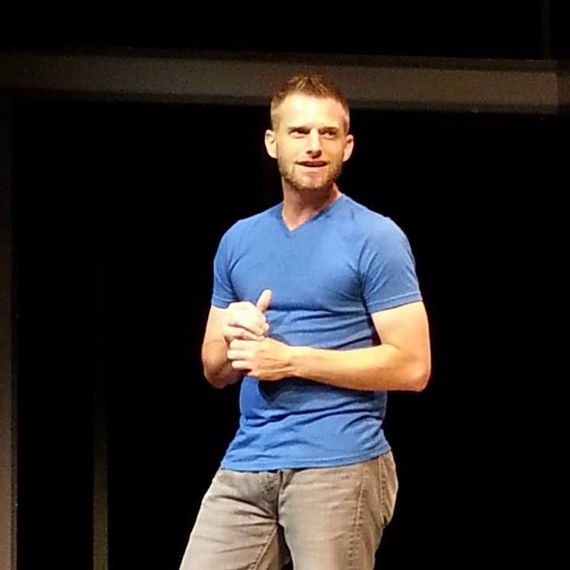 Though deciding to make the comedy album on his own was not a small one for Bein, it was an easy one in many ways.

"When you put this much on record it's there, there's no turning back and that's a little scary," says Bein. "But the comedy industry is so unclear There's no yellow brick road to the city of comedy, but I thought why not do it myself?" He reached out to a filmmaker friend who agreed to produce and record the shows, but everything else falls squarely on Bein's shoulders, which is something that he also found exciting about the challenge. "If something makes me socially anxious, if it's legal, then I'll do it. For me it's one more step in silencing my inner critic, in becoming closer with my work."

Bein is inspired, not only by the multiple tech platforms for distributing material -- Twitter, YouTube, SnapChat, Periscope -- but for the people who fearlessly embrace the next "thing." With such a wide terrain of instant gratification up for grabs, the comedy album is an artifact that almost feels retro. However, Bein sees it as incredibly relevant and an important bit of arsenal in the comedian's war chest. "It does mean something. It surprises me how few people in the area, comics I know or have seen out for a long time have an album. I think many comedians wait for industry to come to them, but you don't have to. It definitely sets you apart, I think. When I say 'I'm a comedian,' people will say, 'Oh where can I see you perform?' and with this I can say 'here's my album, here's a link or a clip to what I do' instead of only talking about my next show."

The logical leap for Bein to make with his album is to use it as a bridge to other comedy markets in larger cities like New York or Los Angeles. But Bein is looking for his hustle to take him further than city limits. He ultimately wants to use his background as a stand-up performer and instructor to facilitate wellness initiatives with disenfranchised communities. He recently participated as a volunteer in Boston College's Prison Arts Outreach program where he brought improv and story telling to a woman's prison in Framingham, Mass.

"Victor Borge said 'laughter is the shortest distance between two people.' I've been teaching comedy for more than eleven years and at least a few times a year people tell me that my class has changed their life in some way, gave them more confidence, or just given them some joy. I feel like there is a social loop hole here, that there is more to tap into about using comedy to make people feel better. That's worth doing all of this for right there."