While Boston isn't the biggest city in the country, it can claim to have a huge number of young people, if only for a part of the year. Every fall, hundreds of thousands of students flock to Beantown to attend one of the one hundred colleges and universities in the Greater Boston area, making the city primed and ready for fun.

If those numbers are true, it doesn't seem to make sense that Boston is suspiciously devoid of big parties and music events. Sure, planning a big festival within any city's limits can be tough, but surely there is someplace open enough for a couple of kids to get together and listen to some bands play, right? 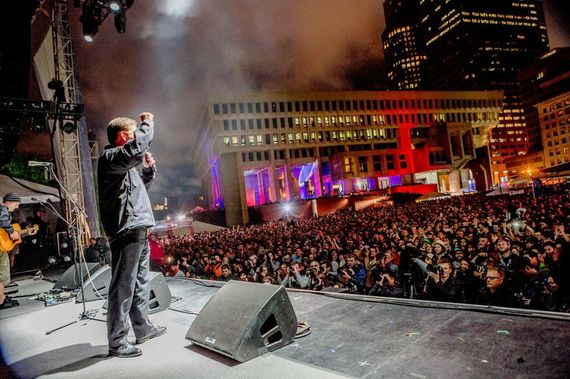 Well there is now. Boston Calling is the city's main music festival, making Beantown step up their musical game. The event started last year and is going strong (and growing). As the initial Calling performance ended, they wasted no time announcing that this would not be a one time thing...not even a once a year thing.

Boston Calling takes place twice a year, first in May and then in September. The festival is so successful because of it's timing; organizers make sure to only host the event when the many thousands of students have time to attend: after finals and right as classes begin. This year the first Calling took place Memorial Day Weekend, and it will return September 5-7th.

As any artist who has performed at a festival knows that half the fun is getting to see so many other singers and groups after their set is done. Tegan and Sara--a favorite at this past May's show--were almost as excited to watch the show as they were to perform.

"I'm excited to see Jenny Lewis! And I love Cass Mccombs." said Sara in an interview.

Boston Calling will hopefully open the door to future festivals and the like, as Boston is a highly underserved market for such happenings. Having grown up and gone to school there, I can say that I wish Boston Calling had been running when I was around, as it turns the entire city into a party for the weekend.

US Presidential Election 2020
Breaking news, analysis and the latest polls on the presidential race from HuffPost’s politics team
See More
More:
tegan and sarafunvampire weekendLordedeath cab for cutie
Newsletter Sign Up
An essential daily guide to achieving the good life
Subscribe to our lifestyle email.
Successfully Subscribed!
Realness delivered to your inbox