To be fair, I was already a little high-strung. At 2:45 I was getting ready to leave early to finish a final project due tomorrow, make it to two club meetings, give a speech, and rehearse with my group for another final also due in less than 24 hours.

It was my first time seeing, let alone volunteering at, the Boston Marathon, and I was so excited because my sorority sisters and I were stationed at the finish line handing out Gatorade to exhausted runners as they passed. 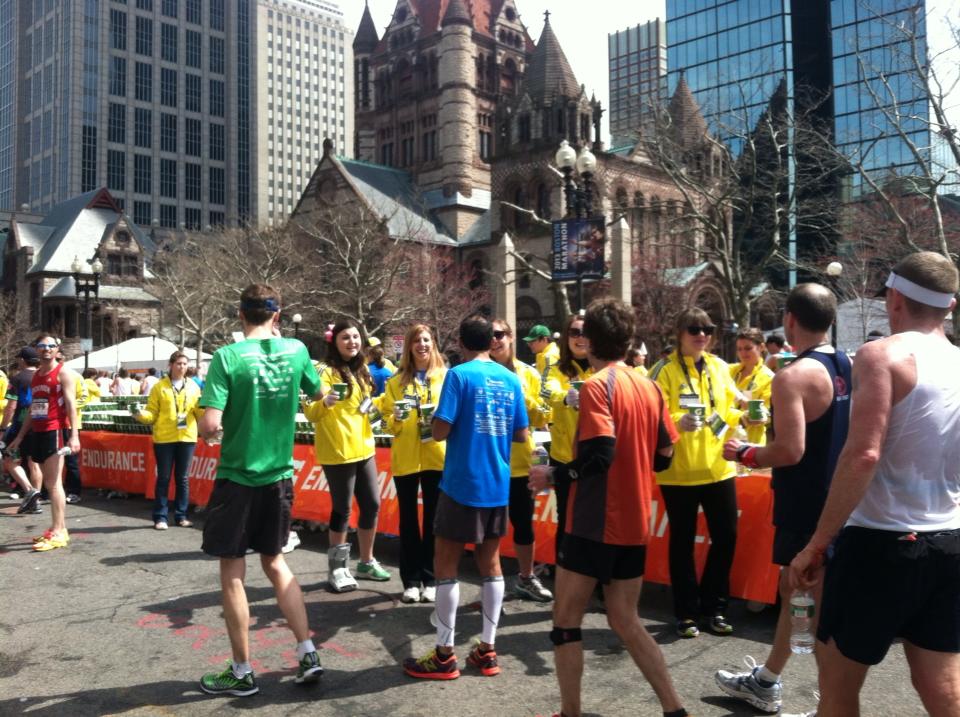 For hours we stood mesmerized by all the sweaty, chiseled people passing by either relaxed or looking as if they were about to die. And we had finally gotten into a rhythm of cheering and handing out cups when the first boom ripped through the crowd.

At first I just felt the impact go through my body. Runners ducked and asked "What was that?" as they swiveled towards the finish line. A pillar of smoke stretched into the air, but with hundreds of runners between me and the explosion I could not see who it had impacted.

For a moment, I tried to convince myself it wasn't a bomb. Maybe at this point in the race they set off a cannon to celebrate? It's an intensely patriotic town, I wouldn't be surprised. But smoke filled the finish area and runners and spectators alike started sprinting towards us in a frantic wave, while nearby policemen shouted, "Everybody don't run! Please stay calm!" Other volunteers and I still stood and stared at the finish line trying to see what happened, wondering about the man in our group who had left to propose to his girlfriend there. And then the second blast went off. 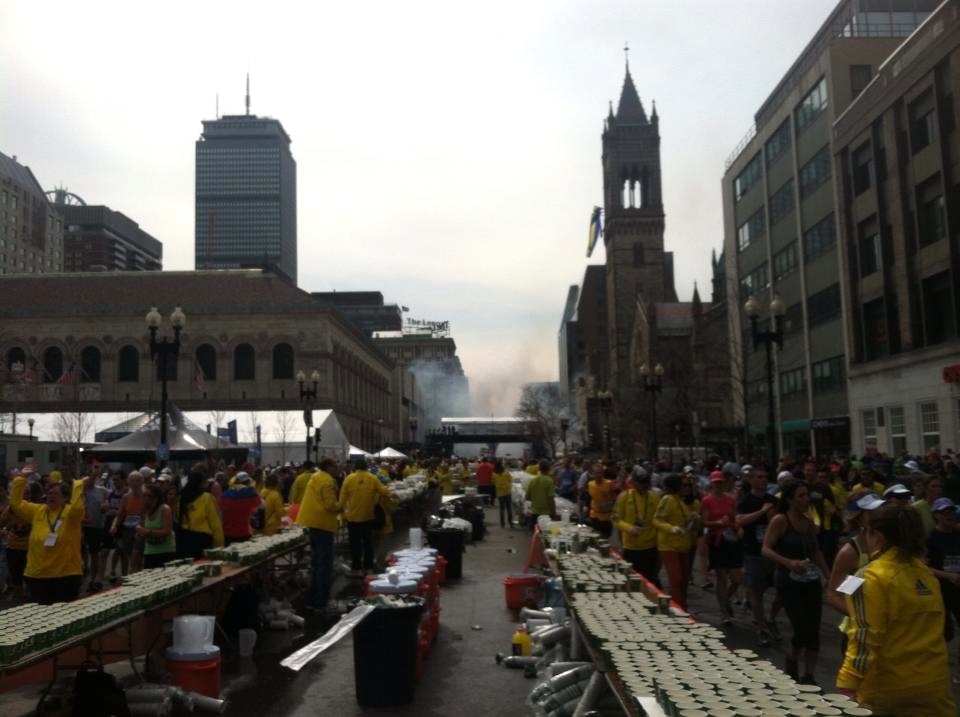 Screams. Stampedes of people coming our way. I heard shrieks of "Bomb!" and "Go! Go!" as they pushed through one another. It was like we were living out some crazy action movie. Seeing every police officer and medical personnel run in the direction of the explosion to help, I have never been more proud to be a Bostonian. But for me, that was now two bombs which had gone off within 50 yards of me, and I wasn't about to wait around for a third. I grabbed my bag, snapped a picture and pushed my way out of the liquids area as fast as I could. In three seconds I was already the person frantically looking back through the rushing crowd trying find my friend Ari. Luckily she surfaced from behind a stream of yellow jackets trying to get away, and grabbing each other's hands, we sprinted. While passing runners who had been far ahead and still didn't know what had happened, more fleeing the area started shouting to them about lost limbs. It was absolute chaos.

For a few minutes we stopped at Boylston and Clarendon, ushering runners towards the family meet up area and telling people to calmly get out of the area. But then a new throng of screaming, crying victims from the second blast reached us and all was lost. Speed walking towards Newbury, someone ran past me shouting, "He's behind us! He's behind us!" and before I knew it I too was dodging through everyone, trying to get out of the crowd. Again I lost Ari and stood in the middle of the street shouting her name as people crashed over the metal barriers trying to run in every direction. We ducked into an alley until the clamor subsided, and found two more of our sisters on Commonwealth, heading towards the Public Gardens.

Crazy as it is, I felt terrible for leaving, even though I had no real medical training and would probably have just gotten in the way. That was the worst part. Knowing something terrible was going on and not being able to do a thing about it but comfort those around you. I couldn't stop shaking for hours.

Calls weren't going through, but within minutes even people I hadn't talked to in years were texting me, Facebook messaging me, emailing me to make sure I was alright. We all had an overwhelming amount of family and friends reaching out to us just to make sure we were okay, whether or not they knew we were near the blasts when they happened. Just the sheer amount of response the people of Boston have gotten online asking people to pray for our city has been amazing, and gives me faith in humanity.

For once, I feel like I can almost understand what it must have been like for those involved in 9/11, or for those overseas where bombs have taken the lives of their loved ones. To be that close to something so sudden and unexpected is a feeling difficult to describe. It's impossible to imagine what kind of person or people could do this and why. I only hope that the local and federal investigators will continue to work day and night until the coward who is responsible is brought to justice.

The whole city is all shaken, but at the same time incredibly thankful knowing it could have been much worse. Because of the event, hundreds of policemen and emergency responders were on the scene within seconds ready to help, and professional medical tents were already set up 100 feet away. As a city and a community, we shall never forget the innocent bystanders who lost their lives, and our deepest love goes out to all their families and other survivors.

What President Obama said is true: Boston is a town full of resilient people and together we will get through this. We will rise above this. I urge residents and the rest of the country to find some way to show their support for those affected, whether it's by wearing race shirts and raising awareness or donating blood to a local hospital. Let's show the rest of the world what it means to be American.