It's unlikely that the people responsible for the Boston Marathon attack will be apprehended through social media -- the security footage from a Lord & Taylor department store appears to be the focus at this point -- but that didn't stop users on Reddit and members of 4Chan from offering their own theories of the crime this week.

Monday's explosions, which killed three people and left more than 170 injured, spawned an onslaught of amateur online investigators. Users sifted through photographic evidence, circled faces and backpacks, drew red lines from here to there, and speculated about potential suspects. 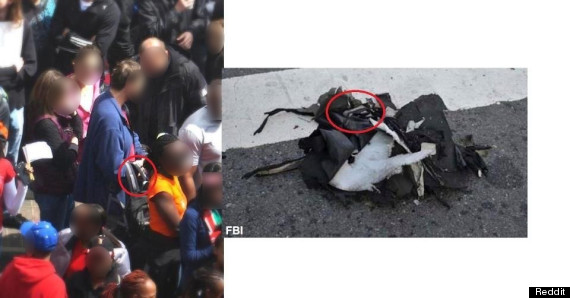 This image was one of many circulated on Reddit in threads debating who could be responsible for the Boston Marathon bombing on Monday. Some are expressing concern over the correctness of self-appointed citizens assigning blame for the tragedy based on photo evidence that should be considered with skepticism.

By Wednesday, a subreddit thread focused on finding the Boston bombers had around 2,000 active users. But as the attention to the photos and speculation increased, so did the criticism from both outside the thread, and within it.

One particular photograph of a man seemed to garner more attention than most others, Mashable notes, and a Redditor invoked a cautionary reminder about Richard Jewell, a security guard at the 1996 Olympics in Atlanta who was falsely suspected of planting a bomb and later cleared.

In a post for the Atlantic, Alexis Madrigal argues that just because technology makes it possible for crowds to engage in investigative behavior, that doesn't mean they should:

"Even if we were to admit that Reddit was 'more efficient' in processing the influx of media around the bombing, which would be a completely baseless speculation/stretch/defense, it still wouldn't make sense to create a lawless space in which self-appointed citizens decide which other citizens have committed crime," Madrigal writes.

Sure enough, comments surfaced within the thread raising questions about whether it's okay to point fingers at people whose only association with the bombing may have been standing nearby, and being captured in a picture as a result.

One Redditor admitted that a person he initially suspected of being tied to the explosions in Boston turned out to be a mother standing with her husband and child. That user deleted his comments and advised others to do the same if their theories were sufficiently debunked.

Still, other Redditors pinned the blame on media outlets, some of which featured the photographs of people without their faces blurred and in turn further publicized the faces Redditors were debating in the threads.

"Do not make any images viral," the top of one thread reads. "It's bad enough certain news sources covering this are pointing out the people we notice, we need to remember, any information should go to the FBI and nowhere else."

One user went so far as to suggest a separate thread for the purposes of confirming the innocent:

"I made a point in another thread that a good use of Reddit's sleuthing skills would be to find people AFTER the blast with black bags. These are confirmed innocent people. Match them to people before the blast. This could be helpful because it will create a quick list of those confirmed innocent. The opposite of a witch hunt, an innocent hunt," writes user jemyr.

Erik Martin, general manager of Reddit, told The Huffington Post that most people are just trying to help. The far more active threads on the site have been those with information to tip lines that go directly to the FBI, he said. "Those [threads] have received far more attention than any of these picture-analyzing threads," Martin said.

Martin also expressed doubt that the FBI would contact any Redditors about their materials. At the same time, he noted, an event of this magnitude without immediate suspects (unlike, for example, the Aurora shooting) is something everyone is relatively new to.

"I don’t think we’ve ever seen something sort of investigatory in nature [on the site] after a major tragedy," Martin said. "This is the first time we’ve had so much information, eyewitness accounts, photos, video. And it's all public, and everyone’s all really upset and moved by this event and trying to do what they can. All of us are in uncharted territory right now."

As for whether these online efforts have helped or hindered the investigation by authorities, a spokesperson for the FBI told The Huffington Post in an email that she could not comment on specific tips received from the public, or the ongoing investigation.

However, she added, "People should share information with law enforcement - that's helpful."