The 2013 Boston Marathon came to a tragic end just before 3 p.m. on Monday, April 15, when twin explosions rocked the finish line causing multiple casualties. At least two people are dead and more than 90 injured, the Boston Globe reported just after 5 p.m.

Below, a timeline of the events of the day. This is a developing story; please check back for updates.

GLOBE: Bombing Suspect In Custody, Another Remains On The Loose

One marathon suspect has been captured, according to an official with knowledge of the investigation.

Another remains on the loose in Watertown after a firefight with police. Authorities have established a 20-block perimeter as they search for him. Just hours after the FBI released the first photos of suspects in the Boston Marathon bombing, a new photo of Suspect 2 may have emerged.

The FBI has not publicly confirmed this photo as Suspect 2, but Green told the Huffington Post that an agent told him, "this is probably the best we have right now."

Minutes before the bombs blew up in Boston, Jeff Bauman looked into the eyes of the man who tried to kill him.

Just before 3 p.m. on April 15, Bauman was waiting among the crowd for his girlfriend to cross the finish line at the Boston Marathon. A man wearing a cap, sunglasses and a black jacket over a hooded sweatshirt looked at Jeff, 27, and dropped a bag at his feet, his brother, Chris Bauman, said in an interview. BOSTON -- Moments after the FBI revealed images of two baseball cap-wearing men wanted for questioning about the Boston bombings, the press conference descended into a sideshow.

A journalist from a far-right wing website called Info Wars shouted out a question accusing the government of carrying out the attack that killed three, and maimed or injured 170 others.

FBI Special Agent in Charge Richard Deslauriers ignored the allegation of a government conspiracy from reporter Daniel Bidondi, but the Alex Jones protege did not stop hollering.

"The FBI lies," Bidondi said. "We've got the proof," he said accusing the government of a "false flag" attack in which it staged the blasts and made them appear like the work of terrorists.

Bidondi found himself at the center of an media scrum with cameras and microphones pointed at his face after law enforcement officials left the podium in the Sheraton hotel.

Another reporter ridiculed Bidondi from across the room, telling him to shut up and calling him an asshole.

The excitement quickly dissipated as reporters returned to delivering the news about the official images of the suspects.

Bidondi has been a presence at other press conferences this week related to the bombing investigation.

CORRECTION: An earlier version of this story misspelled Bidondi's last name. We regret the error.

Is The Suspect's Hat A Clue?

Dr. Ralph Gross, a facial recognition expert at Carnegie Mellon University, said the FBI photos of two suspects in the Boston Marathon bombing are likely too grainy to be matched against a driver's license database or Facebook. But he thinks they may be just good enough for someone who knows the individuals to identify them.

"The resolution isn't particularly good. The one that's kind of best is unfortunately a side view -- and in general the face recognition software works best with frontal view," he said.

Research has consistently found, however, that people can spot people they know even in grainy, off-center photographs.

"Humans are actually very good at recognizing people that they are familiar with," Gross said. "Somebody that might know these guys, or might know the way they dress, might certainly be able to recognize them."

The FBI said the men should be considered armed and dangerous, and urged tipsters to call 1-800-CALL-FBI if they believe they have information that could lead to an arrest.

Hi-Res Image Of People Of Interest

CNN reports that, because of a flood of traffic, the FBI's site is temporarily down. 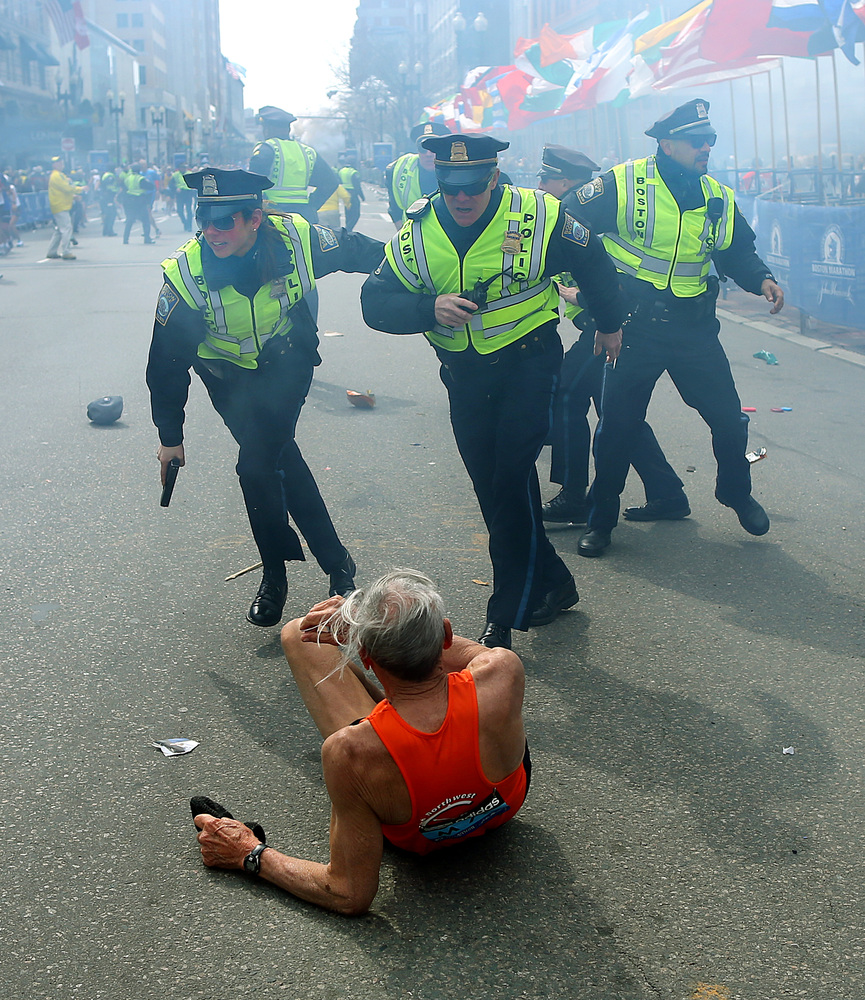